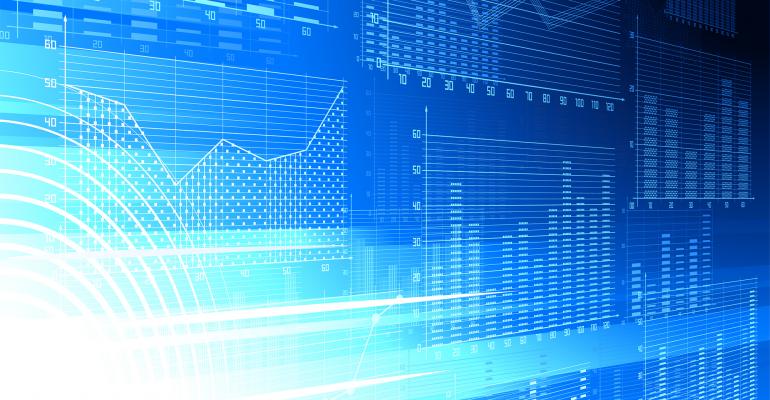 Traditionally an issuer of broad allocation funds, iShares looks to give investors an "emotional connection" to the themes driving investments around technology.

In the past, investors wanting to get in front of a longer-term investment theme owned stakes in one or two companies that provided exposure to the trend and hoped they picked the future winners. However, increasingly there are multiple ETFs that provide access to several dozen companies positioned to potentially benefit if a given trend materializes.

Larger ETF asset managers have traditionally built their lineups based on broad asset-allocation funds, such as iShares Core S&P 500 (IVV), leaving the thematic space primarily for smaller firms such as First Trust and Global X. However, iShares recently expanded its thematic lineup. The top ETF provider can use its scale to compete on price, and iShares’ entry into this space also thankfully highlights the importance of understanding what’s inside a fund.

Armando Senra, Head of US iShares, told CFRA and a room full of reporters in mid-June there’s too much emphasis on cost and not enough on the exposure an ETF provides. He added in the wealth management space trend ETFs offer an emotional connection that can round out a portfolio. Major cyber-attacks regularly demonstrate the reality of the threat to information in the digital age.

iShares Cybersecurity and Tech ETF (IHAK) launched as part of the mid-June release of the company’s megatrend investment framework. IHAK, which charges a 0.47% expense ratio, provides exposure to the global companies along the cybersecurity supply chain, including hardware and software companies. IHAK’s largest positions include OKTA and Zscaler.

The largest stocks inside the $1.6 billion HACK include Cisco Systems and Symantec, while the nearly $1 billion CIBR holds Raytheon and CSCO as its top-two positions; HACK is less concentrated at the holdings level with just 39% committed to its top-10 holdings compared to CIBR’s 47%. 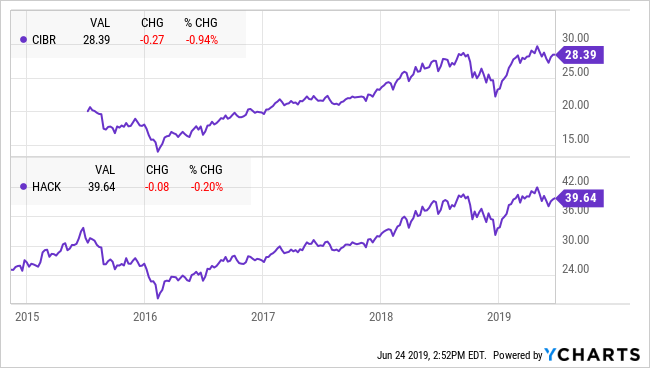 While both ETFs charge a 0.60% expense ratio, CIBR’s 22% year-to-date gain through June 21 was ahead of HACK’s 18% total return and highlights why CFRA thinks it is important to understand what’s inside an ETF. We rate HACK more favorably in our forward-looking research.

ROBO Global Robotics and Automation (ROBO) came to market in October 2013 and the ETF now has $1.3 billion in assets. ROBO’s holdings are largely split between Information Technology (49% of assets) and Industrials (37%), with a more modest Health Care (8%) weighting. Brooks Automation and FLIR Systems were recently among the top positions.

Though Global X Robotics & Artificial Intelligence (BOTZ) launched three years later than ROBO, it has pulled in more assets ($1.6 billion). BOTZ charges a lower 0.68% expense ratio than ROBO (0.95%) and has slightly outperformed thus far in 2019 (22% vs. 21%). Investors in BOTZ have more industrials (47% of assets) and health care (13%) exposure led by large stakes in Intuitive Surgical and ABB.

Like IHAK, IRBO charges a 0.47% expense ratio that is cheaper than its peers. But the bigger difference is its limited industrials stake (11%) and a larger communications services (20%) stake, including holdings like Snap.  CFRA has a higher rating on BOTZ than ROBO and IRBO. 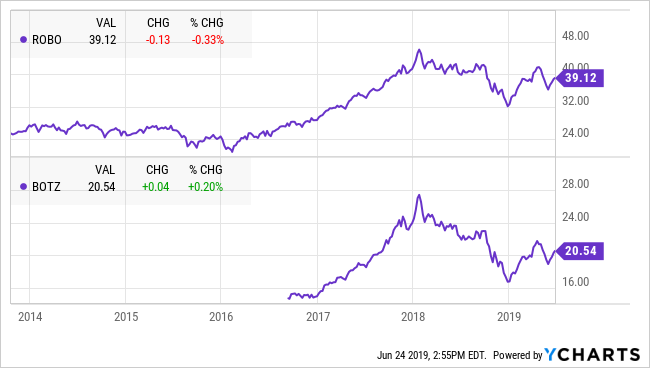 While investors can use thematic ETFs to round out their portfolios, as with most other funds, we think a focus on what’s inside can be particularly revealing.

This thematic research was originally published on MarketScope Advisor https://www.cfraresearch.com/marketscope-advisor/.