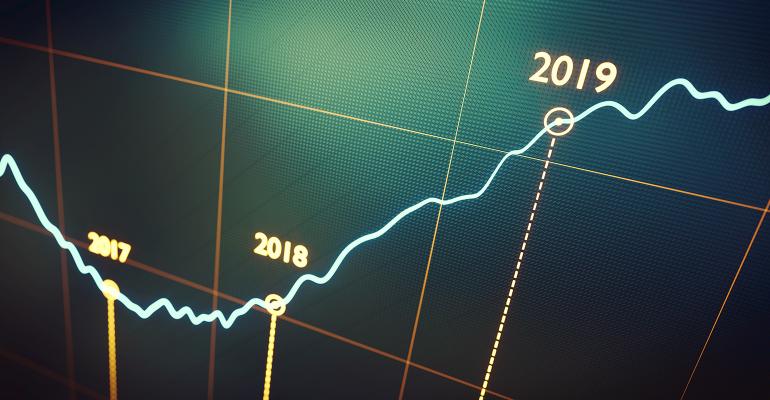 Investors Are Not Waiting Three Years With ETFs

Here's a breakdown of the top ETFs with more than $1 billion in market capitalization and a track record of less than three years.

New ETFs keep launching on a weekly basis, and not long after CFRA establishes a quantitative forward-looking rating. While some others in the industry wait for a three-year anniversary, we understand there’s demand to learn about new products early in their lifecycle. Indeed, there are nine ETFs that began trading in the past three years, rated by CFRA and that have a market capitalization greater than $1 billion. Many more could hit that mark before they are rated elsewhere.

CFRA rates more than 400 equity and fixed income ETFs that launched after April 2016 (27% of our 1,467 rated fund universe as of April 16), using a combination of qualitative and quantitative holdings-level analysis and fund attributes focused on costs, liquidity and technical analysis. Rated coverage typically begins within three months of an ETF’s history, and as of April 16 we rated 11 ETFs that launched in 2019.

These include BlackRock US Equity Factor Rotation (DYNF) and Fidelity Small-Mid Factor ETF (FSMD) that still have limited assets. While DYNF and FSMD remain small in size, many other still young ETFs have successfully tapped into a compelling theme, while others gained traction due to their low costs.

Although the Federal Reserve has likely paused its rate-hiking program, in 2018, there were significant concerns about the impact of rising interest rates. Ultra-short-term bond ETFs, both young and old, raked in cash as downside protection was in vogue.

JPMorgan Ultra-Short Income ETF (JPST) launched in May 2017, but gathered $5 billion in 2018 and an additional $1.5 billion this year to reach a $6.6 billion market capitalization. The ETF sports a 2.9% 30-day SEC yield, despite incurring an average duration of just 0.5 years. The portfolio holds mostly investment-grade corporate bonds, but also includes asset-backed securities and a modest Treasuries stake. Further helping CFRA’s rating is the modest 0.18% net expense ratio.

Goldman Sachs Access Treasury 0-1 Year ETF (GBIL) will turn three years old this September, but has $3.1 billion in assets. Similar to JPST, demand soared in 2018 as GBIL pulled in $2.1 billion of net inflows. The higher-credit-quality Goldman ETF has an average duration of 0.35 years and yields 2.3%. GBIL also has an appealingly low 0.12% net expense ratio. 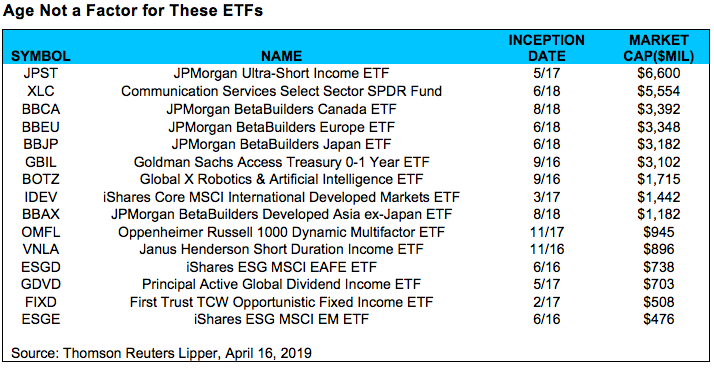 BBCA, BBJP and BBAX charge modest 0.19% expense ratios, while BBEU is even lower at 0.09%. All track market-cap weighted indexes that are increasingly being used for tactical allocation purposes. Some of the initial assets stemmed from JPMorgan’s shift from using more expensive iShares country or regional ETFs, such as iShares MSCI Japan (EWJ), which charges a higher 0.47% expense ratio. Yet, BBEU and BBCA added an additional $1 billion of net inflows thus far in 2019, while comparably constructed iShares products have not been under pressure.

Though Global X Robotics & Artificial Intelligence (BOTZ) should be viewed as a thematic ETF, its $1.7 billion market capitalization has been driven in part as a cheaper alternative to a more established offering. BOTZ charges a 0.68% expense ratio, which is a lower than the 0.95% fee for peer ROBO Global Robotics and Automation (ROBO). Since BOTZ launched in September 2016, the ETF has gathered nearly double the net new money as ROBO.

CFRA’s negative rating on BOTZ is due to the still high fees and our qualitative and quantiative forward-looking view of the fund holdings, such as Intutitive Surgical (ISRG).

Communications Services Select Sector SPDR (XLC) and Oppenheimer Russell 1000 Dynamic Multifactor (OMFL) round out the top 10 list of largest ETFs rated by CFRA and still less than three years old. XLC has benefitted from the GICS realignment that shifted Facebook (FB) and Netflix (NFLX) into a new sector. Meanwhile, OMFL dynamically rotates among factor strategies such as low volatility, quality and value.

CFRA research reports on these ETFs and more than 1,400 others can be found on the ETF tab of MarketScope Advisor. Visit www.cfraresearch.com to gain access.