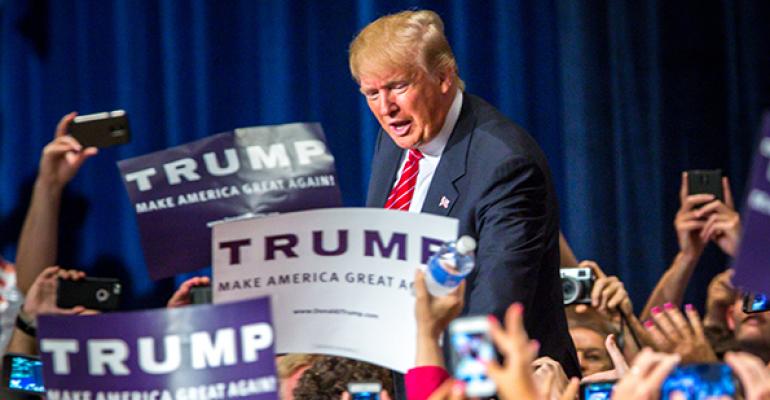 The iShares MSCI Mexico Capped ETF has become a popular vehicle for traders looking to bet on the U.S. election.

(Bloomberg) --The largest U.S.-based exchange-traded fund of Mexican equities saw its biggest withdrawals since the 2013 taper tantrum on Tuesday, as renewed FBI attention on Hillary Clinton's e-mails boosted the odds of a Donald Trump presidency.

The iShares MSCI Mexico Capped ETF has become a popular vehicle for traders looking to bet on the U.S. election, and saw $94 million in outflows:

An improvement in Trump's polling odds has become highly correlated with weakness in the Mexican peso, leading analysts at Credit Suisse AG to term it the "ultimate market indicator" of a Republican victory. The party's nominee has pledged to renegotiate the North American Free Trade Agreement and build a wall along the southern U.S. border.

EWW, as the Mexican ETF is known, has more than $1 billion in assets, having received massive inflows ahead of the final presidential debate as investors placed tactical bets on a Clinton victory that would buoy the peso and Mexican equities.

"This particular ETF seems to be the most connected to the polls," said Eric Balchunas, who analyzes exchange-traded funds at Bloomberg Intelligence. "This has literally become a proxy for what you think will happen in the election."

The volume of shares traded exceeded 13 million on Friday, the highest level on record for this ETF.

The narrative coming from one-day fund flows can be complicated by other forces, such as a major fund manager shifting their portfolio, but in this case the movements match those visible elsewhere in financial markets.

As Trump's likelihood of becoming the next U.S. president swelled, SPY, a popular ETF tracking the S&P 500 index, saw more than $1 billion in outflows. While that's not an unusual amount for this product, other ETFs that fell out of favor also include the "who's who of riskier, hot-money products," according to Balchunas.

"'SHY' might be the most apropos but accidentally-named ticker — it's what you're feeling when you buy it," the analyst said. "When you see 'SHY' at the top of the flows — you can't get more nervous than that."