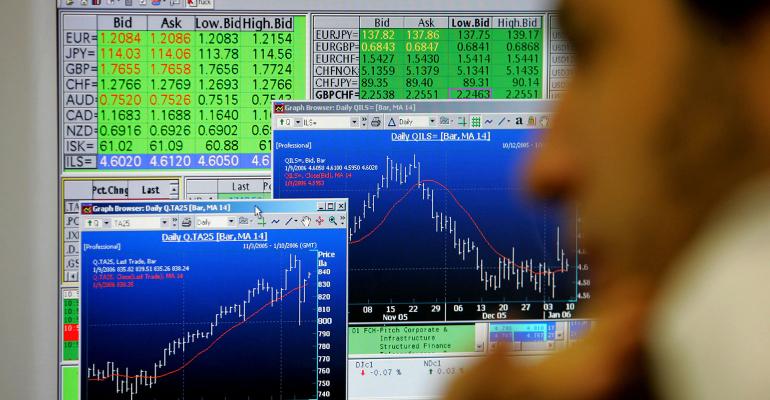 (Bloomberg) --The world’s riskiest stock markets are being swept up in the great rotation from bonds to equities.

The prospect of the fastest economic growth in the developing world since 2013 is luring global investors back into emerging-market equities. Schroder Investment Management Ltd. has built up a 6 percent holding this year after being absent from the asset class for half a decade. BlackRock Inc. and ABN Amro Bank are also buyers.

While most of the $2 trillion shift out of bonds since Donald Trump’s election win has gone into shares in the U.S. and Europe, investors aren’t overlooking the opportunities in the developing world, where stocks trade at a 30 percent discount to the S&P 500 Index. Equity markets such as Brazil and Russia have the added attraction of giving investors exposure to currencies that are rebounding from a slump in energy prices.

Investors poured $1.12 billion into passive funds that track emerging-market stocks last week, while pulling $91 million from bond exchange-traded funds, according to data compiled by Bloomberg. The MSCI Emerging Markets Index advanced 2.9 percent, its biggest weekly gain since September. Average allocations to developing-country stocks in U.S.-domiciled global funds have been below five percent for the past two years, according to Morningstar Inc.

For Kyrklund, valuations are cheap enough to compensate for the big concern that’s keeping many investors at bay: Trump’s proposals to protect U.S. industry by dismantling trade agreements with the developing world. If Trump “chooses to go down the path of significant protectionist measures,” Schroder may review its holdings, she said.

If he doesn’t, Kyrklund says she may add emerging stocks and has room to build holdings to as much as 20 percent. She declined to go into detail about which stocks she has been buying, but said her investments have been “broad-based.”

Emerging-market economies will re-establish themselves as a “dominant driver of global growth” in 2017, according to 50 percent of respondents in a survey conducted by Citigroup Inc. As a group, developing nations are forecast to expand 4.7 percent next year, the fastest pace since 2013, according to economists polled by Bloomberg.

ABN Amro has been buying Asian equities amid its shift to a significant overweight in global stocks, according to Chief Investment Officer Didier Durant. BlackRock is buying “selected commodity producers” on prospects a supply cut will buoy oil prices, and stocks in countries including India, where policy makers haven’t been afraid to make painful economic adjustments, according to an e-mailed note last week.