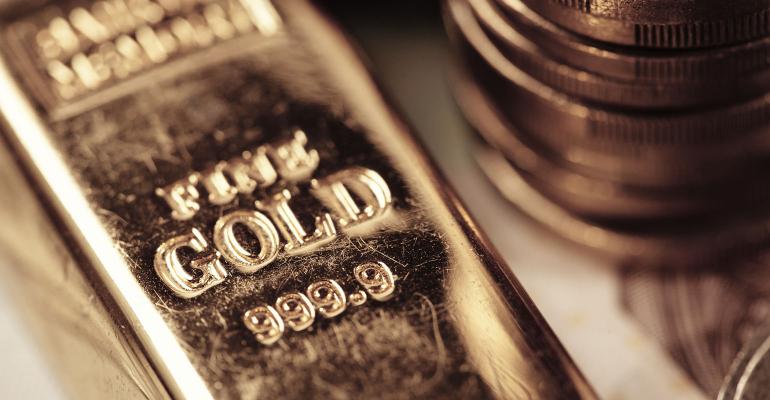 ETF investors may help stabilize the market because they tend to hold assets longer than hedge funds and large speculators who are more likely to react faster to events.

(Bloomberg) --In times of trouble, gold has long been a popular haven for investors expecting that more volatility will increase the value of the commodity. But lately, it’s taking more than threats of war or terrorist attacks to get much of a reaction from the bullion market.

Price swings for the precious metal narrowed last month to the smallest in more than a decade, even with rising tensions between the U.S. and North Korea, political discord in Europe, and trade disputes fueled by Donald Trump’s America-first policies. That’s a disappointment for investors who remember how gold tripled in value after the 2008 financial crisis or surged more than 50 percent in the months after the Iranian hostage crisis in 1979. One possible reason for the lack of volatility is the growth of exchange-traded funds backed by gold, which account for about two-thirds of the $113 billion invested in precious metals, compared with almost nothing before 2004, when bullion ETFs were created, according to  Chris Louney at RBC Capital Markets. ETF investors may help stabilize the market because they tend to hold assets longer than hedge funds and large speculators who are more likely to react faster to events, said Michael Blumenroth, an analyst at Deutsche Bank.

“You’ve got a lot more retail interest, and that constant state of demand has brought down the overall volatility,” said Peter Sorrentino, the Dallas-based chief investment officer of Comerica Asset Management Group, which oversees $43 billion, including gold ETFs. In essence, the commodity “has been securitized” by the inflow of retail cash, he said.

The birth of bullion-linked ETFs has led to a surge in trading. In March, the daily average value of gold transactions cleared through the London Bullion Market Association was $22.2 billion, compared with $6.4 billion during the same month in 2004. SPDR Gold Shares, the biggest such ETF, began trading in November 2004. Since then, it’s amassed $33.7 billion in assets, making it a major holder of traded gold, according to data compiled by Bloomberg.

Even with all that money invested in the precious metal, on April 28, the 60-day historical volatility for spot gold fell to the lowest since 2005.

Most of the ETFs are long-only funds, and investors tend to take advantage of the slide in prices by adding their holdings, particularly in Germany, Deutsche’s Blumenroth said. That has helped narrow the volatility, he said. Frankfurt-listed Xetra Gold, the fastest growing commodity ETF this year, saw inflows of cash every month since the end of 2015, taking total assets to $6.49 billion. SPDR Gold attracted $1.3 billion this year.

While there are lots of reasons investors use to justify owning gold, from concern about inflation or economic growth to increasing demand for jewelry or central bank reserves, history shows it’s also been a popular go-to asset in times of turmoil.

Gold averaged 12 percent returns in the two months after eight major geopolitical events analyzed by RBC over a 23-year period through 1993. That included the U.S. bombing of Cambodia in 1970, the Black Monday stock market crash in 1987, and Iraq’s invasion of Kuwait in 1990. The biggest gain occurred after the Iranian hostage crisis in 1979, which sent gold climbing 58 percent in two months.

“Geopolitical events serve as less of a long-term driver of the gold price,” Stephen Walker, head of global mining at RBC, said in a telephone interview April 18. “It’s the purchase of the ETFs -- that’s been driving the gold price versus systemic risk around politics."

Gold for immediate delivery traded at $1,225.50 an ounce on Tuesday, near the lowest level since mid-March.

The wider pool of investors in the gold market and the presence of longer-term traders are helping mute the impact of developments that decades ago would have spurred strong haven demand for the metal and bigger price gyrations.

On April 13, the U.S. dropped the largest non-nuclear bomb it’s ever used in combat on Islamic State positions in Afghanistan. Spot gold prices gained 0.1 percent, and declined a day later. That compares with a 1.6 percent gain in prices on June 24, 2004, as bombs exploded in Iraq and Turkey.

Bullion has also been muted around North Korea. On May 1, the first trading day after  Kim Jong Un’s regime weekend test-fire of a ballistic missile, prices fell 0.9 percent. That compares with an intraday gain of 1.3 percent in March 9, 2006, when North Korea launched two short-range missiles.

Even the market anxiety over developments in Greece’s debt crisis has waned. In Sept. 6, 2011, concerns that the nation’s woes would spread throughout Europe prompted investors to load up on gold, pushing up prices as much as 1.1 percent to a record. Years have passed, and Greece is still having trouble. On Jan. 30, gold prices rose no more than 0.7 percent after the International Monetary Fund said in a draft report that the country’s financing needs will prove “ explosive” in decades to come.

Bullion-backed ETFs gained popularity because they offered investors access to the metal without the worry of storage or delivery costs. It’s also attracted interest from fund managers who find it easier and cheaper than maintaining a portfolio of gold futures, which expire almost every month.

ETFs are having a bigger impact on gold than they are on other markets. For example, equity-backed ETFs had about $3.3 trillion of assets worldwide, but that’s less than 5 percent of the $73 trillion market value for global stocks, according to data compiled by Bloomberg.

That doesn’t mean gold volatility is gone forever. A resurgence of market anxiety similar to what emerged after the stock market crash on Oct. 19, 1987, could trigger wilder price swings for bullion, said Chad Morganlander, a money manager at Stifel, Nicolaus & Co. in Florham Park, New Jersey. The S&P 500 Index of equities slumped 20 percent that day, and bullion surged 3.4 percent.

“For investors like ourselves, we find gold ETFs a great source of diversification because ETFs have been a great source of liquidity,” said Morganlander, who helps oversee more than $250 billion. “Volatility is not going to go away anytime soon. When you have financial stress, gold is still a great hedge and that’s what’s going to drive volatility.”