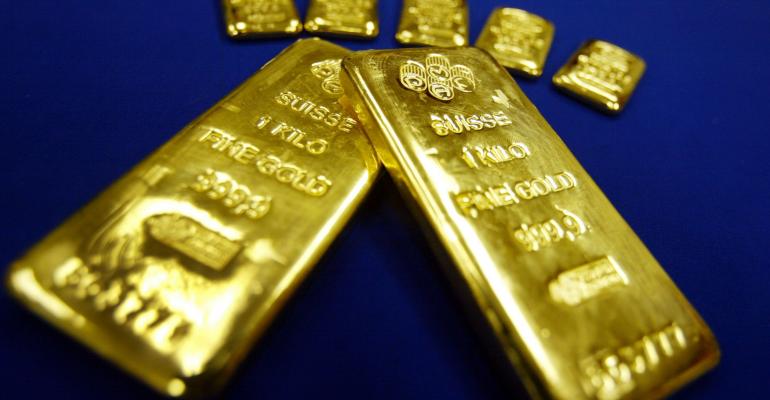 The four exchange-traded funds backed by the metal that have attracted the most money this year are all based in Western Europe.

(Bloomberg) --European investors are leading the race to gold as concerns over growing populism and protectionism embraced by Donald Trump fuel demand for haven assets.

The four exchange-traded funds backed by the metal that have attracted the most money this year are all based in Western Europe. Frankfurt-listed Xetra-Gold tops the list, bringing in about $544 million last week, the biggest weekly inflow since at least 2012, according to data compiled by Bloomberg. That’s more than 10-times the new money added into SPDR Gold Shares, the largest commodity ETF, data show.

European investors are piling into gold, fueling the metal’s rebound, amid concern that Trump’s "America first" rhetoric and plans to scrap regional trade deals will impede global economic growth. Adding to the anxiety is the impact from Britain’s exit from the European Union and the growing popularity of anti-establishment politicians running in this year’s elections in Germany, France and the Netherlands.

“People just want to be on the safe side,” Michael Blumenroth, a Frankfurt-based analyst at Deutsche Bank AG, said in a telephone interview. “If they see stock markets going down, then people think that gold will at least be an insurance. There’s a lot of uncertainties and that’s exactly driving the purchases of gold ETFs not only in Germany, but in London as well.”

Gold futures for February delivery fell 0.3 percent to $1,212.50 an ounce at 8:05 a.m. on the Comex in New York, after touching the highest since November earlier. The precious metal climbed on Monday, while equities in the U.S. and Europe fell, as Trump abruptly ended the decades-old U.S. tilt toward free trade by signing an executive order to withdraw the country from the Trans-Pacific Partnership accord with 11 other nations.

The euro region could break up if political leaders don’t get to grips with the discontent that’s spurring support for populist leaders across the continent, JPMorgan Chase & Co. Chief Executive Officer Jamie Dimon said last week. Novartis AG Chief Executive Officer Joe Jimenez said Europe is in a state of flux, and billionaire investor George Soros said that the consequences will be “dire” if the region breaks down.

Baring Asset Management’s Christopher Mahon is one of the investors seeking a haven in gold. He said 4 percent of the 1.7 billion pound ($2.1 billion) Dynamic Asset Allocation Fund is invested in a gold-backed ETF.

U.S. hedge funds and large speculators have also turned more bullish on gold over the past two weeks, after paring their net-long positions for eight straight weeks, according to data from the U.S. Commodity Futures Trading Commission. The appetite for SPDR Gold is also returning after 10 straight weekly outflows.

“The U.S. has just had its moment of populism, as happened in Britain earlier,” said James Butterfill, head of investments and research at ETF Securities U.K. Ltd., which oversees the $5.6 billion ETFS Physical Gold. “There are still big question marks over Trump’s ability to deliver on this wave of optimism. In France and Germany, they’re still waiting to see what happens in elections.”