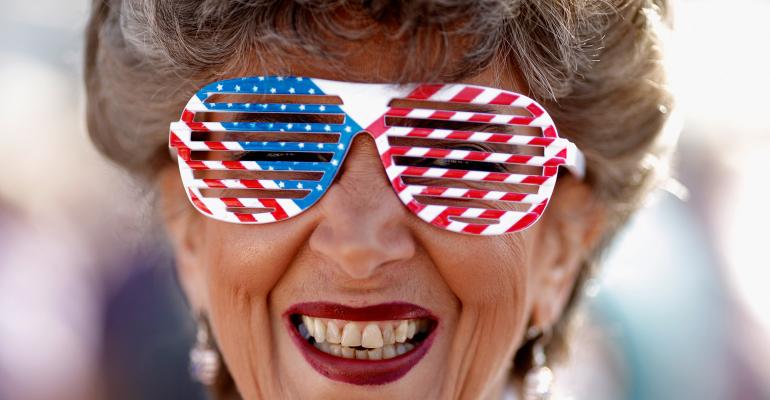 The fund will seek to invest in U.S.-listed companies with a “track record of creating American jobs.”

(Bloomberg) -- An exchange-traded fund is in the works that is looking at brandishing the made-in-the-USA label. But it’s an American fund with a twist -- it will remove any companies the firm deems “activist.”

The God Bless America ETF, advised by the Toroso Investments and sub-advised by Curran Financial Partners, will seek to invest in U.S.-listed companies with a “track record of creating American jobs,” according to a Tuesday filing with the Securities and Exchange Commission. The actively managed ETF, which will trade under the ticker YALL, will screen out firms that have “emphasized political activism and social agendas at the expense of maximizing shareholder return.”

Previous principles-based ETFs have been met with muted demand. The Point Bridge GOP Stock Tracker ETF (MAGA), which invests in companies that support the Republican party, has attracted just $15 million in assets despite handily outperforming the S&P 500 over the past year. Meanwhile, assets in environmental, social and governance-focused ETFs declined in the first quarter -- a rare drop that Bloomberg Intelligence sees continuing as performance suffers.

“These things are hard to sell as an investment,” said Eric Balchunas, Bloomberg Intelligence ETF analyst. “I just think they’re probably overestimating how much people will actually move their investments into this. Even people who care a lot -- people like cheap, they like liquid.”

Michael Venuto, Charles Ragauss and Adam Curran will manage YALL, which will hold 30 to 40 companies, according to the filing. Fees are not yet listed.