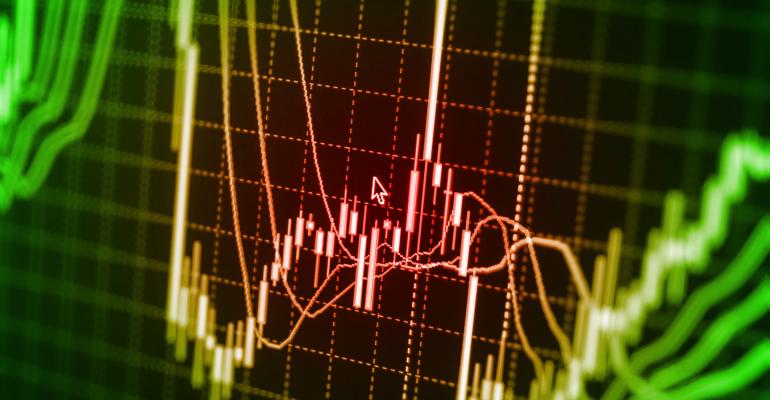 Most investors are attracted to funds holding high-yield securities, though significant assets are committed to investment-grade paper.

Nearly a year ago, as part of our survey of alternative income funds (“Alternative Alternative Income”), we picked through a number of floating-rate note (FRN) portfolios to find the potential best-of-class performance should interest rates rise.

Not all these portfolios are alike, so one shouldn’t expect uniform results. The vast majority of the $9.8 billion held by exchange traded fund (ETF) versions are invested in corporate securities. And, among these, there’s further differentiation by credit ratings.

Most investors are attracted to funds holding high-yield securities, though significant assets are committed to investment-grade paper. The junk/quality split is 54/40 with the remaining 6 percent in municipal and Treasury notes as well as a fund devoted to variable-rate preferred stock and hybrid securities.

Overall money has flowed out of the 12 ETFs plying the floater trade over the last 12 months. Net redemptions of $417 million reduced the category’s asset base by 4 percent. This wasn’t a wholesale dumping; it was more tactical. Some segments lost assets, some gained. And that’s a story in itself.

Junk note funds lost nearly 16 percent, or $986 million, while ETFs invested in higher-grade corporate notes saw inflows of nearly 5 percent, or $183 million. At the same time, there was a $5 million, or 45 percent, boost in the newer (and smaller) Treasury segment.

The single fund devoted to municipal notes bled assets, losing $27 million, or 28 percent, of its base while the other singleton, the variable preferred stock ETF, tripled in size with $408 million in net creations.

Two trends are at work here. Some of the high-yield assets migrated to safer havens, namely bank-grade and Treasury paper. Mainly, that’s been an escape from duration risk. Money’s also being drawn to the equity side in response to more encouraging economic data.

The second trend is a mercenary search for yield. Consider the inflow to the preferred stock ETF. Dividend yields for variable preferreds indexed in the Wells Fargo Hybrid and Preferred Securities Floating and Variable Rate Index exceed 5 percent, significantly higher than the rates earned by junk notes. Investors believe that stocks, common or preferred, are okay to buy again. Especially if they produce lip-smackin’ income. The insulation from duration risk is a boon.

So, let’s take a closer look at the cash thrown off by these ETFs, along with their return characteristics.

The 600-lb. gorilla among high-yield floater ETFs is the $3.7 billion PowerShares Senior Loan ETF (NYSE Arca: BKLN), which owns more than 70 percent of the segment. As BKLN goes, so goes the segment.

Buoyed by a market-weighted 4.22 percent dividend yield, high-yield ETFs collectively earned a total return of -2.54 percent over the past 12 months. The segment’s discernible duration is 2.27 percent, making it the most rate-sensitive in the asset class. When benchmarked against the iShares Core U.S. Aggregate Bond ETF (NYSE Arca: AGG), a broad market bond index tracker with a duration of 5.53 percent, you can see the bargain made by FRN investors: Aiming for higher dividends and less rate sensitivity, they settled for lower overall returns.

Despite its middling dividend yield, assets have flowed to the First Trust Senior Loan ETF (Nasdaq: FTSL) in the past year. FTSL is actively managed with a mandate that allows the portfolio to be invested in non-U.S. paper and equities. Net creations have boosted the fund’s asset base by 87 percent. 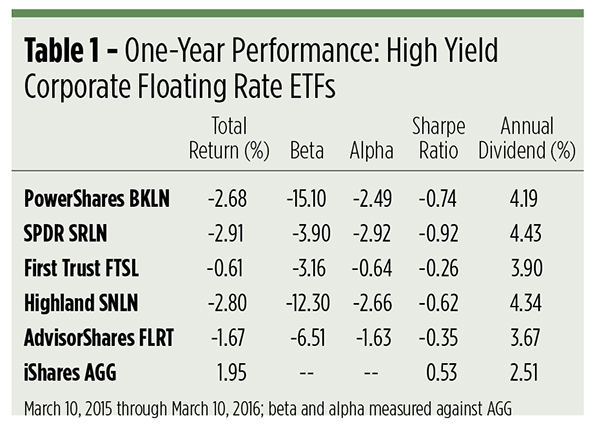 Dividends are a lot lower in the bank-grade segment. With a collective “A” credit rating, the segment’s market-weighted yield is just 0.58 percent. Modified duration, at 0.12 percent, is very low as well. Like high-yield corporates, total returns have been negative, though at -0.40 percent, less so. 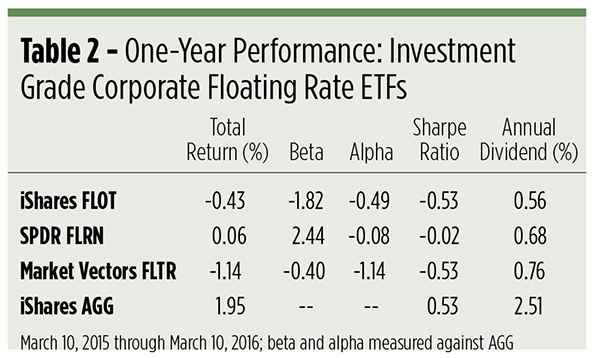 Floating-rate Treasury paper, with its low yield and virtually nonexistent duration is really a cash substitute. Investors, wary of potential Fed rate hikes, have goosed up the segment’s small asset base in the last 12 months. It’s the only segment, too, that’s produced a positive, albeit small, total return. Nearly all the segment’s assets are held in the iShares Treasury Floating Rate Bond ETF (NYSE Arca: TFLO). 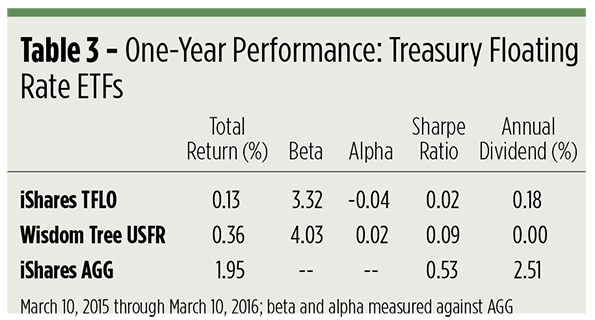 There are a couple of ETFs at the corners of the floating-rate market. The PowerShares Variable Rate Preferred ETF (NYSE Arca: VRP), claiming the highest dividend yield in the class, earns the variable moniker in more than one way. It’s been one of the category’s more volatile issues, and ended up losing money overall in the past 12 months.

A stablemate, the PowerShares VRDO Tax-Free Weekly ETF (NYSE Arca: PVI), owns municipal bonds, rated AA- on average, that can be redeemed weekly. Duration is negligible, which make the fund a cash substitute. With no dividend stream, however, the total return pretty much reflects its holding costs. No wonder the fund lost assets. 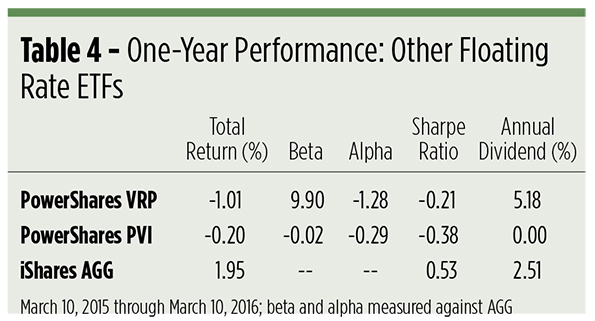 The side-by-side comparison in Chart 1 shows how the category’s biggest funds behaved over the past 12 months. Three ETFs—FLOT, PVI and TFLO—varied little from their starting values, but BKLN and VRP wobbled significantly. 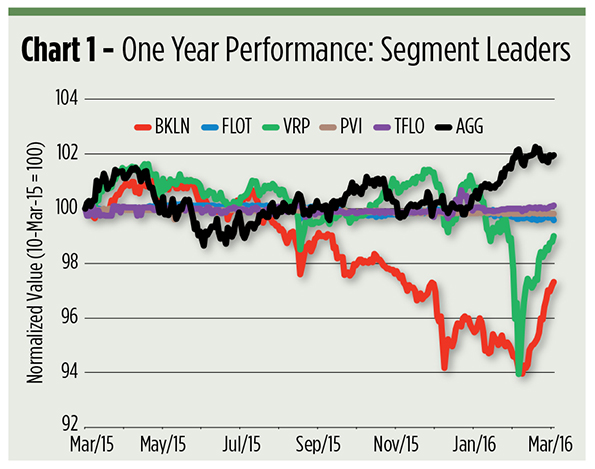 Such volatility speaks to inherent risk. Floating-rate funds limit duration risk so they’re obliged to take on more credit risk to generate attractive returns. We seem to have reached a risk inflection point, though. By and large, investors are fleeing the risk in the high-yield corporate market.

That exodus, in great part, reflects investor perceptions that Fed rate hikes may be coming at a slower pace than originally expected. The advantage of holding variable-rate securities, then, has diminished, making other assets more appealing.