/sites/all/themes/penton_subtheme_wealthmanagement/images/logos/footer.png
Recent
Recent
What’s Behind the Appeal of Portfolio Hedging Using Inverse ETFs
May 29, 2020
Ameriprise Touts Merits of Virtual Recruiting
May 28, 2020
Stifel Settles With FINRA For More Than $3 Million Over UITs
May 28, 2020
LPL Lures Washington-Based Team from Wells Fargo FiNet
May 28, 2020
A Can’t-Miss COI Campaign
May 28, 2020
Featured
Poll: 15 Classic Books on Investing and the Markets
Apr 03, 2020
FICO Updates and Their Impact on Credit Scores
May 06, 2020
Franklin Templeton Fires Portfolio Manager Amy Cooper Involved in Central Park Dog Incident
May 26, 2020
The Top Colleges for Financial Planning
Oct 03, 2019
The Market's Measure
brought to you by

Finding a Sweet Spot on a Flat Yield Curve

Over the past 16 months, our yield curve has gyrated more than Chubby Checker—your King of Twist—at a Saturday night kegger. Just take a gander at the chart below. The red curve depicts the normal Treasury debt market extant on the eve of last year’s Independence Day. One year later, things went topsy-turvy, resulting in the inversion depicted by the blue line.

And now? Well now we’ve got a flat curve with very little variance in rates stretching from one-month bills to five-year notes (see the green line). 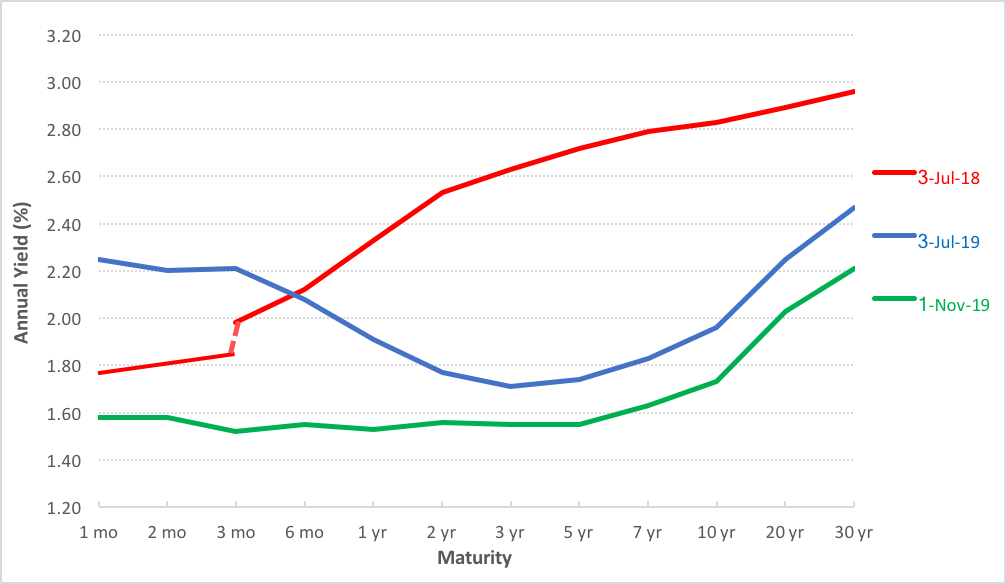 Let’s step back a bit. An inversion of the yield curve is usually taken as a signal of impending recession. Not an immediate downturn, mind you, but 12 to 18 months after the flip occurs. If you accept that reasoning, it seems that the current flattening of the yield curve heralds diminution in fears of an upcoming slump. Not all is beer and skittles, however. Historically, a horizontal front end in the yield curve portends low growth ahead.

Slow growth is certainly better than negative growth, but this presents a challenge for portfolio managers looking to diversify stock risk. Many might be tempted to swing for the fences, aiming to obtain the highest possible yield as recompense for sluggish stock performance. Reaching for yield typically means stretching out to acquire longer-dated paper, but that may present untenable risks for conservative investors or those who need to preserve capital. And that’s reason enough to consider intermediate-term bonds or bond funds.

To understand why this approach may make better portfolio sense, consider the difference in rate volatility across segments of the curve. Look back at the chart above. Between July 2018 and November 2019, the greatest swing in rates occurred in intermediate-term paper. The question now is whether the curve’s midsection has reverted to normal, heralding a relatively stable rate environment going forward, or is likely to rebound.

A corollary concern is duration. Value-wise, longer-dated paper is more sensitive to shifts in interest rates. That’s a boon when rates are falling; it’s a bugbear while yields rise. That’s less of a concern for medium-term debt, relatively speaking.

So, where to go in the mid reaches of the yield curve? Consider Table 1, which lists the large (> $1 billion) ETFs spanning the intermediate government and corporate debt markets.

As you can see, there’s a fair degree of diversity within the segment. Yields aren’t—or shouldn’t be—the single determinant of how much risk a portfolio runner might assume.

For one thing, there’s the issue of fees. In a low-rate environment, the high expense ratios charged by some legacy funds may become ever harder to overcome.

The view from 30,000 feet—or three years out—better illustrates the interplay of return and risk factors.

Clearly, there’s more to picking a fund than just snagging the highest yield, especially for those aiming to temper downside risk.

Therein lies the big conundrum. Note the Sortino ratios for the corporate-only funds. Both the iShares Intermediate-Term Corporate Bond Fund (IGIB) and the Vanguard Intermediate-Term Corporate Bond Index Fund (VCIT) exhibit substantially less downside variance than the government-only products. That’s an artifact of the corporate portfolios’ closer link to stocks, as evidenced by their correlation coefficients. This is an important consideration for advisors and investors going forward. The past three years were bullish for stocks. The next three may not be.

Texas-based columnist and activist Jim Hightower is famous for his distain of the middling. “There’s nothing in the middle of the road,” he says, “but a yellow stripe and dead armadillos.” We’re awaiting his opinion on the middle of the yield curve.