Investors pay up for value and dividend tilts.

Two words describe the current trend in international equity investing: value and dividends. A number of value-tilted and dividend-paying ETFs have been breaking to the upside, some reaching new lifetime heights. It’s no wonder. Dividend yields for the largest seasoned funds are two and a half times that of the S&P 500.

But is there real value in value? The average expense ratio for the five largest international high-value/high dividend funds is 52 basis points. It’s fair to ask if investors are getting their money’s worth.

When benchmarked against the Vanguard FTSE Developed Market ETF (NYSE Arca: VEA), a market-cap weighted index of large-, mid- and small-cap offshore companies, all five value/dividend funds offer premium yields. For a price. A substantial price. VEA’s annual holding cost is just one-tenth that of the funds in the table.

So, is there value for all that money among these funds? A couple outgun the benchmark return to yield positive alpha coefficients and information ratios, so maybe so.

For a fund with a $4.6 billion asset base, the iShares International Select Dividend ETF (Cboe BZX: IDV) seems remarkably nimble. The fund tracks a dividend-weighted index of the highest-yielding securities issued by non-U.S. companies. The fund’s tiered weighting scheme tilts the portfolio toward mid- and small-cap companies, resulting in a table-topping alpha value. The fund’s positive information reflects the stability of the fund’s outperformance.

North American issues aren’t welcomed into the ALPS International Sector Dividend Dogs ETF (NYSE Arca: IDOG) either. IDOG’s $222 million portfolio is an equal-weighted mix made up of the five highest-yielding stocks from each of 10 GICS sectors in international developed markets.

Looking at the table, it’s clear the standout performance was put on by the behemoth iShares IDV portfolio. IDV outperforms the other funds, and the benchmark, on several metrics.

So, is bigger—as in assets under management—always better? Not necessarily. Go downmarket a bit and you’ll find a fund with even more impressive numbers. 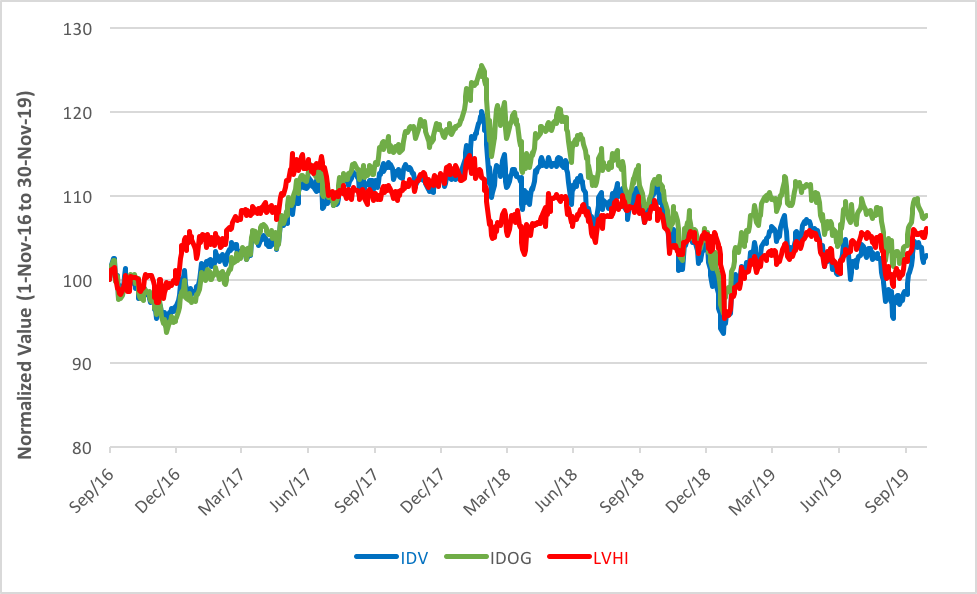 LVHI’s average annual return bests IDV’s with a lot less volatility. Better than that, the Legg Mason portfolio’s annual expense is 9 basis points cheaper. And because of its low volatility, LVHI’s alpha is substantially higher than the iShares fund. With an information ratio equal to IDV’s, LVHI’s constancy is on par with the bigger fund. All told, LVHI is the better bargain.

A couple of caveats attach to an LVHI investment, though. First, the fund doesn’t throw off the highest dividend yield. It’s a benchmark beater to be sure, but sustainable dividends aren’t necessarily the highest. In fact, the case made by Legg Mason is that inordinately high dividend yields aren’t viable over the long run.

Then there’s the issue of liquidity. Trading volume in the Legg Mason fund is substantially lighter than IDV’s. LVHI’s bid-ask spreads, too, are significantly wider. Large buys and sells of the Legg Mason fund require more careful management than IDV trades.

With these stipulations in mind, the old adage, “You get what you pay for,” may be standing on its head.