/sites/all/themes/penton_subtheme_wealthmanagement/images/logos/footer.png
Recent
Recent
When Clients Get the Pink Slip
May 22, 2020
Reboot Your Work From Home Routine
May 22, 2020
Early Retirement Is Tempting Now. Don’t Do It
May 22, 2020
Digital Metrics Soar At Raymond James, TIAA
May 21, 2020
WealthTech Winners Circle Podcast: TD Ameritrade Bringing the Latest in Innovation
May 21, 2020
Featured
Poll: 15 Classic Books on Investing and the Markets
Apr 03, 2020
FICO Updates and Their Impact on Credit Scores
May 06, 2020
The Top Colleges for Financial Planning
Oct 03, 2019
The 10 Most and 10 Least Valuable College Majors
Aug 28, 2019
The Market's Measure
brought to you by

One thing’s for sure: It’s been a bad year to bet against beta. That’s self-evident if you just look at a chart of the Vanguard Total Stock Market ETF (NYSE Arca: VTI) racking up a gain of more than 22 percent through October.

Some investors have been able to do better, squeezing out an extra percentage point or two by factor-tilting their equity exposure. Not toward any factor, though. A 2-point return bonus could have been earned for a beta-embracing wager on quality stocks. A smaller premium was on offer for wrangling beta to minimize portfolio volatility. At least that’s the tale of the tape.

The iShares Edge USA MSCI Quality Factor ETF (NYSE Arca: QUAL) earned a 0.99 beta coefficient as it cranked out its 24 percent return. The “quality” sought by the fund’s index methodology centers on finding large- and mid-cap companies with high returns on equity, low debt-to-equity ratios and a history of stable earnings growth.

QUAL earns a seemingly modest alpha coefficient but bests all the other factor funds with a high information ratio. This may seem puzzling. Why is QUAL’s alpha just second best? It’s because alpha measures QUAL’s return against the beta-adjusted return for VTI. All else held equal, QUAL’s alpha would have been higher if its beta was lower.

Calculation of the information ratio doesn’t rely on QUAL’s beta. Rather, the ratio’s derived by dividing the fund’s excess return (over VTI) by QUAL’s tracking error. Tracking error is the standard deviation of QUAL’s excess return. The information ratio reveals more of the consistency of a fund’s out- (or under-) performance since it’s based on the entire series of returns rather than end-of-period returns.

The foregoing helps to explain the performance data of the iShares Edge MSCI Min Vol USA ETF (Cboe BZX: USMV), a fund built around an optimization algorithm that consider correlation between stocks as it constructs a minimum variance portfolio.

USMV exhibits about half the volatility of the QUAL portfolio. Not surprisingly, USMV’s beta coefficient is lower. Lower beta, higher alpha.

USMV’s information ratio is positive, a sign that the fund’s active bet—the systematic management of portfolio volatility—paid off. That USMV’s ratio is relatively low is evidence of greater variance in the fund’s day-to-day tracking error versus VTI. 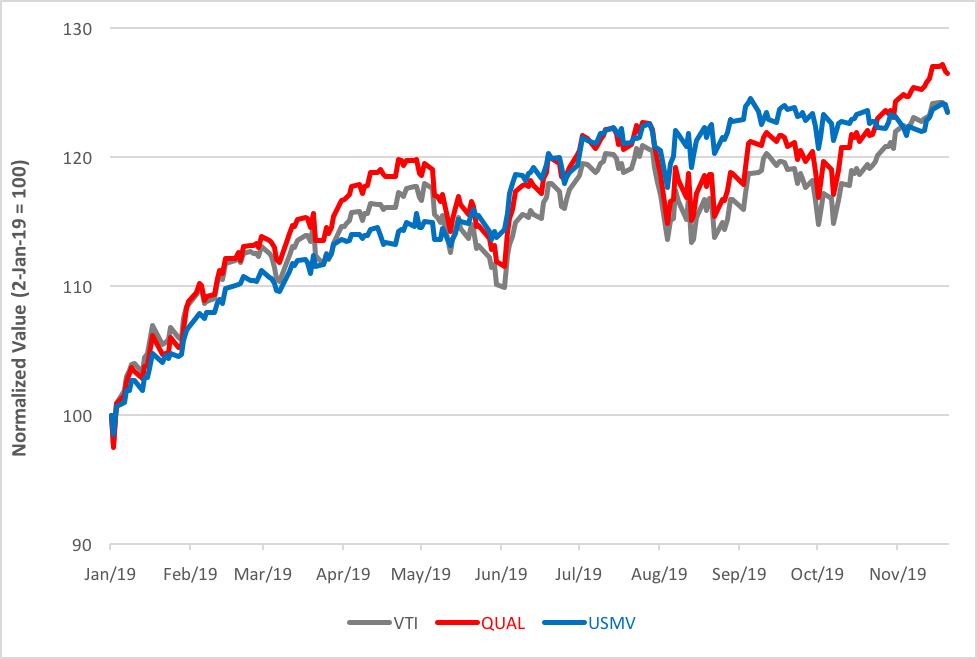 So, what about the contention that beta’s been a bad bet this year? The table’s best performers bet with beta: QUAL in full-throated fashion and USMV to a more limited degree. The argument against beta is better made by an ETF that’s managed to produce a negative coefficient. The AGFiQ US Market Neutral Anti-Beta Fund (NYSE Arca: BTAL), with a beta of -0.88, earned a return of just 6.60 percent for the year, less than 30 percent of the broad market’s gain.

All this is history. What of the future? Are the current table toppers likely to produce paybacks for their active bets going forward?  In a word, yes. Fundamentally, the wind is at QUAL’s back. Investors turn to companies exhibiting financial strength in the late stages of a business upcycle and during subsequent contractions. Our economic recovery is no spring chicken. One can reasonably argue that we’re, in fact, peaking.

This is also a favorable environment for USMV. Volatility spikes have been market features for nearly two years, raising the background radiation level for that infamous measure of fear, the Cboe Volatility Index (VIX). The 50-day moving average for VIX was 10.41 at the start of 2018. It’s now more than 40 percent higher. High volatility is historically associated with significant market tops and follow-on declines. 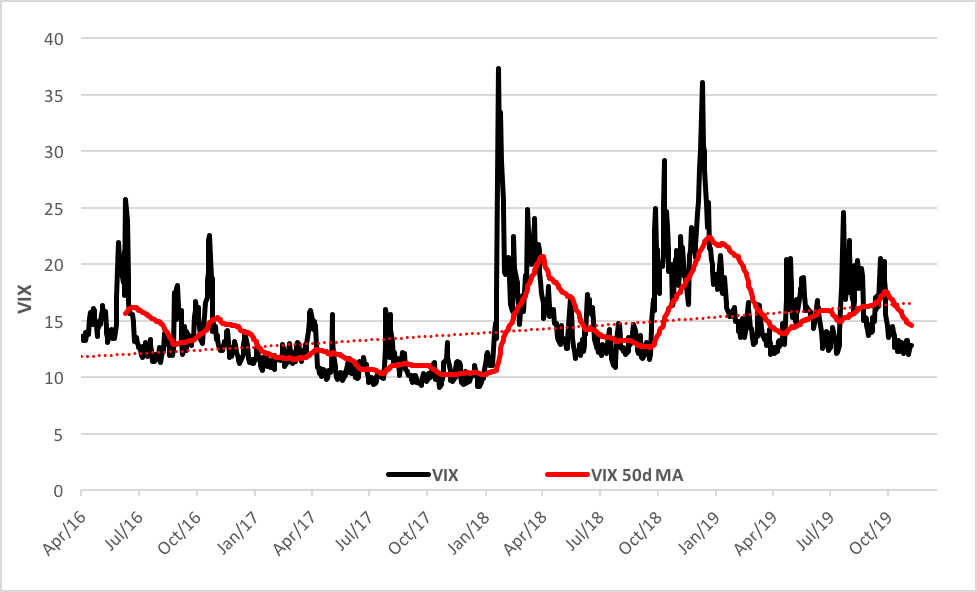 Over the longer term, the technical picture for USMV and QUAL—especially for USMV—is better than that of any factor fund in the table.

Investors and advisors pondering the turning point in the VIX chart above might recall the words of Goldman Sachs’ Lloyd Blankfein: “Every time I get accustomed to low volatility … and we think we have all the levers under control … something erupts to remind us that the idea that anybody is in control of everything is hubris.”