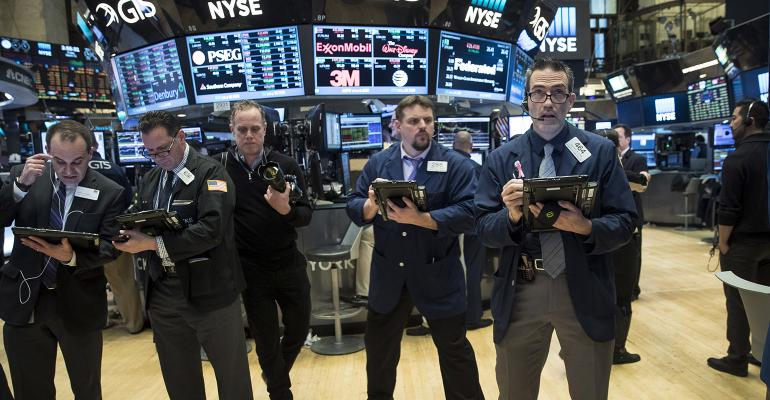 ETFs account for a greater portion of trading volume in bank stocks than ever before.

(Bloomberg) --While the rest of the U.S. stock market celebrates its independence, liberated of lockstep moves and free to chart its own course, bank shares remain a bastion of groupthink.

So riveted are traders to interest rates and Trump tweets that the sector is swinging up and down with almost unheard of uniformity. While correlations among S&P 500 Index members hover near a 10-year low, the measure for S&P 500 financial companies is the highest in two years and close to its level in the financial crisis, Goldman Sachs Group Inc. data show.

On to such a stage often walk exchange-traded funds, convenient tools when an industry is moving with no differentiation among shares. ETFs account for a greater portion of trading volume in bank stocks than ever before, even as their presence in every other sector is still average. Is that good? Lately the downside of such a setup has gotten a wider airing in academic literature, with particular scrutiny on liquidity. Researchers at Stanford University, Emory University and the Interdisciplinary Center of Herzliya in Israel updated a study earlier this year showing that when single stocks are cast aside for ETFs, bid-ask spreads widen. It’s something to consider for institutional investors, according to Eric Balchunas, ETF analyst for Bloomberg Intelligence.

“It’s a legitimate concern. This is where you’d see ETFs starting to vampire some of the liquidity away from the underlyings,” Balchunas said. “If ETFs begin to trade at higher volumes than their underlyings, even though it’s not a systemic market risk, it will make it more expensive.”

Volume in the Financial Select Sector SPDR Fund has dwarfed most exchange-traded products during the past month. At more than 72 million shares, average daily trading over the past 30 days is higher than even the biggest ETF tracking the S&P 500 or emerging markets. Meanwhile, the daily volume among individual stocks in the S&P 500 financial sector is on track for the lowest yearly average since 2014. For evidence of tightening correlations, look no further than Warren Buffett’s Berkshire Hathaway Inc., whose shares are lately indistinguishable from the banking group as a whole. The two-month correlation between Berkshire and XLF reached its highest point last month at 0.93, according to weekly data compiled by Bloomberg.

It’s not unusual for ETF trading to pick up during macro events. In the financial crisis, ETFs represented about 50 percent of the total U.S. equity trading volume, data compiled by JPMorgan Chase & Co. show.

“The measure of ETF volumes as a percentage of total trading volumes correlates with market volatility, as investors tend to trade more ETFs during volatile markets,” according to the bank’s May ETF research report. “Higher volatility drives an increase in macro trading via ETFs with broad-based exposure, and also leads to more hedging activity, which is done by shorting or buying puts on ETFs.” Since U.S. equity volatility has been subdued, the amount of ETF trading as a percentage of total stock trading volume has likewise remained subdued at around 30 percent. The same can’t be said for the financial sector, however. In early November, the ratio of XLF trading spiked, as investors used the fund for easy participation in a Trump trade that anticipated industry deregulation.

Some of it may reflect hedging as well. Average daily open interest for XLF options is on track to be the highest this year since 2011, data compiled by Bloomberg show.

“You get the sense that there are more cases where people may just buy the ETF instead of a single name or a couple of names,” Balchunas said. “If more people do that, then the underlyings are going to lose some volume. ”