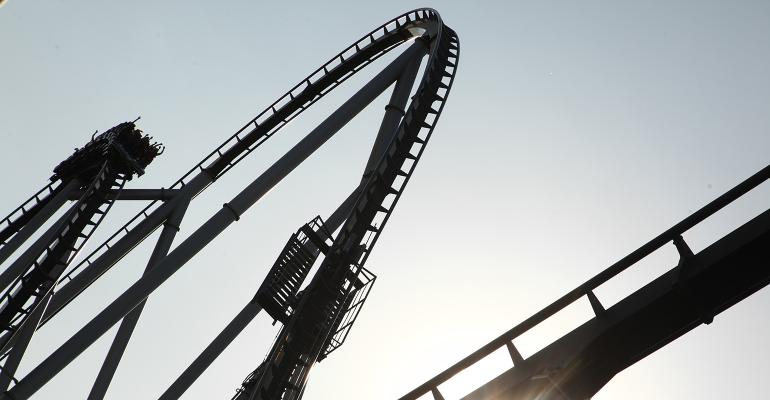 ETFs That May Take the Sting Out of a Market Correction

These funds may deflect some of the pain of a correction while keeping an investor in the market.

The iShares S&P 500 Index ETF (IVV) was down 7 percent in the past month, reminding investors that the market goes down and not just up. Sam Stovall, CFRA’s chief investment strategist, thinks this decline will become a mild-to-medium correction (10 percent to 20 percent) before the market’s price appreciation angle of ascent has been appropriately adjusted. Historically, when there is a correction, it only takes four months to recover the losses.

CFRA has a 12-month target price for the S&P 500 index of 3,100, suggesting ample upside based on forward earnings and inflation expectations—if investors can stay the course and not bail from the market amid the near-term volatility. And indeed, there are funds that may let an investor remain invested while deflecting some of the pain of a full-on correction.

iShares Edge MSCI Minimum Volatility ETF (USMV) is a strong candidate. The ETF was down just 4 percent in October and year-to-date was up 5 percent, ahead of the 3 percent  for IVV.

The ETF essentially holds the least volatile stocks within the MSCI USA Index with sector constraints. While the information technology sector exposure is USMV’s biggest (20 percent of assets for USMV versus 21 percent in IVV), USMV’s largest positions here include Fiserv, MasterCard and Visa, the sector’s heavyweights; AAPL and MSFT have smaller positions in the portfolio.

Meanwhile, there are other sectors with larger discrepancies from the S&P 500 Index. For example, USMV has just 9.8 percent invested in financials, lower than IVV’s 13.3 percent. Insurance companies Chubb and Markel are examples of the ETF’s larger holdings in this sector; JPMorgan Chase is absent.

In contrast, utilities (8.4 percent for USMV versus 3.1 percent for IVV) and real estate (8.3 percent versus 2.8 percent) are heavily weighted in the portfolio with meaningful stakes in NextEra Energy and Avalon Bay Communities.

While the portfolio earns a neutral rating input for CFRA STARS, our qualitative assessment of the likely future prospects of the holdings, from a risk considerations perspective, we are more favorable. Overall, the holdings within the ETF have strong S&P Global Market Intelligence Quality Rankings, with MA and NEE as examples with above-average earnings and dividend records. In addition, CFRA equity analysts collectively view the portfolio as incurring below-average qualitative risk.

At the ETF level, there’s a lot to like about USMV. The ETF has declined recently but has not broken through its 200-day moving average and we see bullish technical trends. Meanwhile, volume has picked up in the past month with more than 3 million shares trading hands consistently, an increase from less than 2 million in the six-month period. USMV trades with just a penny bid/ask spread, combined with a modest 0.15 percent expense ratio, provides positive cost factor attributes in our research. Lastly, as would be expected with a fund focused on reducing volatility, USMV’s three-year standard deviation is below the equity ETF average.

Since July, USMV has pulled in $1.7 billion in new money, with approximately one-third coming in October. In contrast, Invesco S&P 500 Low Volatility ETF (SPLV), gathered just $190 million and surprisingly experienced outflows in October. Well-informed investors will look inside, as USMV and SPLV are constructed differently.

SPLV holds the least risky stocks in the broader S&P 500 Index and unlike USMV has no sector constraints. Utilities (25 percent of assets) is the largest of the sector weightings and a level triple that of USMV. The next two largest sectors are real estate (18 percent) and financials (16 percent). In contrast, there’s just 10 percent in technology stocks, half of what’s inside USMV. There is some overlap in the positions of USMV and SPLV with FISV and NEE among them, but also many stocks that don’t qualify for either portfolios.

SPLV’s 2 percent gain in 2018 lagged USMV, but this included a narrower loss of 3 percent in October than USMV.  Both ETFs are a top rating to CFRA, as we go beyond focusing on past performance.

Rather than being scared off by market volatility, investors can look to reduce the risk considerations of their equity allocations with these and other ETFs.

Todd Rosenbluth is the director of ETF and mutual fund research at CFRA. Investors can learn more about CFRA’s forward-looking research on over 1,700 ETFs at https://newpublic.cfraresearch.com/etf/.