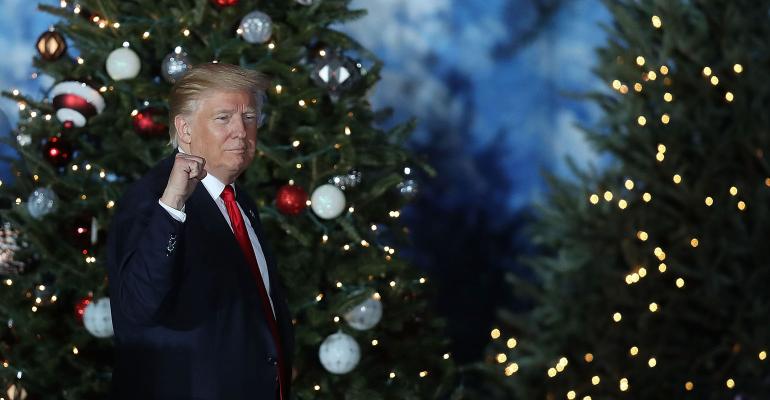 ETFs for Higher Rates and Inflation

The new president has an ambitious plan to spend money and cut taxes. Here are a few exchange-traded funds that can provide some ballast for a likely rise in both interest rates and inflation.

The Constitution allows a long lag time between the election and the inauguration of a new president. Financial markets have no such patience. The prospect of higher infrastructure and defense spending coupled with tax cuts, promised by the incoming administration, pushed interest rates and stock prices higher soon after the election results were in.

Now it’s debatable whether the increase in government debt necessitated by the new president’s policies will actually produce robust economic growth or simply spur inflation. Financing, at least at the outset, will require new bond issues. That jolt of new supply alone is bound to impact the prices of outstanding issues, especially if the new coupons are relatively high.

Further pressure on bond prices can be expected if inflation is kicked up a notch or two, a likelihood if trade protectionism and immigration restriction, both goals of the new president, crimp the supply of goods and labor.

So what can investors do to gird themselves for the possibility of lower bond prices (read: higher interest rates) and inflation? There are several exchange traded funds (ETFs) that can be used for portfolio tweaking. The ones listed below have fared best this year.

The ProShares Short 20+ Year Treasury ETF (NYSE Arca: TBF) offers daily unlevered and inverse exposure to an index tracking the performance of U.S. Treasury securities with more than 20 years left to maturity. The fund uses swaps and futures to yield a modified duration of -17.7 years, making this investment exquisitely sensitive to rate wobbles at the long end of the yield curve.

Technically, duration represents the number of years required to recover a security’s true cost, counting the present value of all coupons and principal. More simplistically, it’s a measure of interest rate sensitivity. For TBF, the number tells us that a 1 percent hike in the reference 20+ year rate would be expected to produce a 17.7 percent hike in the fund’s net asset value.

To put this in perspective, consider the post-election backup in the 30-year Treasury bond rate. Over the first two weeks in November, it rose 41 basis points (0.41 percent) while TBF’s share price climbed 7.3 percent.

You can get virtually the same exposure as TBF through the Direxion Daily 20+ Year Treasury Bear 1x Shares ETF (NYSE Arca: TYBS) for half the price. That word “virtually” is important. TBF and TYBS may track the same index, but they do so in decidedly different ways. TBF uses a portfolio of five index futures and swaps while TYBS relies upon a single ETF swap. This, plus different index switchover dates, accounts for their disparate performance.

If you’re chary of volatility, you could slide down the yield curve a bit with the Sit Rising Rate ETF (NYSE Arca: RISE), an actively managed portfolio that aims to capitalize on rising interest rates by taking short positions in 2-, 5- and 10-year Treasury note futures. RISE managers set an explicit duration target of -10 years, making this fund a precise hedging tool. Duration for TBF and TYBS, apart from being longer, is variable. RISE is structured as a commodity pool, which means investors receive a K-1 partnership return at tax time rather than the Form 1099 received by holders of TYBS and TBF.

Treasury Inflation-Protected Securities (TIPS), an innovation that hasn’t really had an inflationary cycle work out yet, provide investors an opportunity for both rising income and capital gains. If inflation climbs, so too do TIPS coupon payments and the principal amount received at maturity.

Cheaper and broader exposure to shorter-term TIPS is available through the Schwab U.S. TIPs ETF (NYSE Arca: SCHP). With SCHP, you get a 47-issue portfolio for just 7 basis points.

Real estate investment trusts (REITs) that hold paper, rather than property, can capitalize upon a steepening yield curve, a common artifact of inflation. Mortgage REITs, in most instances, are an arbitrage because issuers borrow money at the short end and lend or invest at the long end. They can make money in a rising-rate environment provided long-term rates rise faster than short-term rates.

While the 35-issue iShares Mortgage REIT Capped ETF (NYSE Arca: REM) portfolio is a bit broader than MORT, it’s no less concentrated. REM’s topmost component, in fact, accounts for more than 17 percent of the fund’s assets.

Leveraged loans are floating rate notes also known as bank or senior loans. The reason for the various names is simple. Each moniker denotes a feature of the marketplace. These loans are leveraged because they’re obligations of companies that typically already have a high amount of debt and are often characterized by lower credit ratings or higher interest rates. They’re bank loans because they’re syndicated by merchant banks. And they’re senior loans because they have repayment priority over subordinated debt and preferred shares. These notes are commonly secured by company collateral.

Leveraged loan yields float along with the London Interbank Offered Rate (Libor), and reset periodically. A loan, for example, may use three-month Libor as its reference rate, specify a spread, such as 250 basis points above the reference, and further call for quarterly resets.

As commercial loan rates rise, so too should leveraged loans yields—until they don’t. These loans, after all, are made to companies that may be overburdened by debt service. While insulated from some interest rate risk, they still convey substantial credit risk.

International exposure to the floating rate market is obtainable through the actively managed First Trust Senior Loan Fund (Nasdaq: FTSL). Eighty-six percent of FTSL’s portfolio securities are rated BB or B. The fund is primarily, but not exclusively, focused on North America (Canada, the U.S. and Mexico).

These ETFs aren’t the only investments that could help you get through the next four years. But there’s history showing assets like these fare well in inflationary cycles.

But the past is not prelude. It may be too early to even know what future actually awaits us. As surprised as we’ve been by current events, we’d do well to keep Walt Whitman in mind: “The future is no more uncertain than the present.”