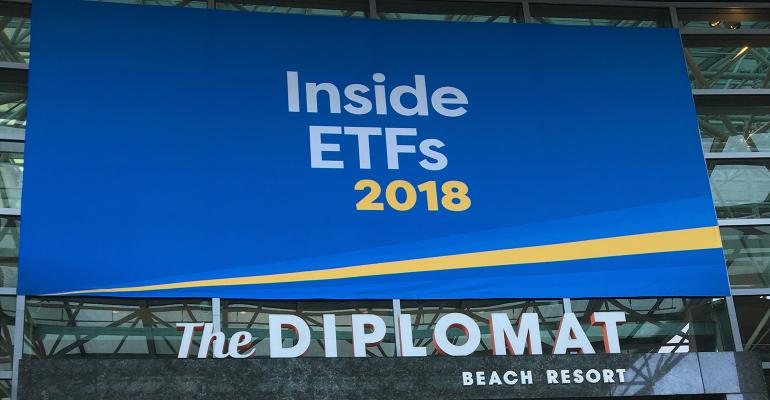 Because beneath the razzmatazz of poolside parties and cabana happy hours, there is a less palatable reality. It’s getting tough out there for many ETF firms.

With trillions of dollars now being held in thousands of different products, exchange-traded funds have gone from a sideshow of the financial world to the center stage.

No where is this more apparent than at this week’s annual schmooze-fest in Hollywood, Florida, called “Inside ETFs.” Once a sleepy gathering of insiders pushing a niche concept, the conference has gone upscale. The line up of scheduled speakers and performers includes tennis champion Serena Williams, legendary music producer Quincy Jones, General Stanley McChrystal and correspondents from “The Daily Show.”

Is it a reflection of a business on an inexorable rise, or is it an eerie echo of the star-studded events that often precede financial crises? We’ll find out. Because beneath the razzmatazz of poolside parties and cabana happy hours, there is a less palatable reality. It’s getting tough out there for many ETF firms.

Look at the numbers and you’ll see two industries: one small and thriving, the other large and struggling. While the 20 largest ETF issuers in the U.S. gained assets last year, 13 of them still lost ground or failed to increase their market share. More than 85 percent of all ETFs started each year fail to pass the threshold of $100 million in assets in their first year. And liquidations are at an all-time high.

“There’ll be increasing competition and maybe consolidation as the large ETF providers continue to gain more market share,” said  Stephen Cucchiaro, who founded one of the first ETF-focused investment shops and now oversees almost $800 million as president of 3Edge Asset Management. “They can afford to continue to lower the prices and squeeze the profit margins down because they have other ways to make money.”

Once a chaotic maul that could hand victory to anyone in the fight, the $3.6 trillion ETF industry has consolidated into a one-on-one slugging contest between BlackRock Inc. and Vanguard Group. Together, the Big Two control 65 percent of the U.S. ETF market. Throw in State Street Corp., which runs SPY, the oldest and largest ETF, and you’re looking at 83 percent of all domestic ETF assets.

“The low hanging fruit’s been picked,” said Brendan Ahern, chief investment officer at Krane Funds Advisors. “There are great opportunities to do differentiated products, have a differentiated message. But I think it has become so much more difficult.”

The struggle is hard to spot amid a conference hall awash with sponsored freebies. Yet smaller issuers increasingly find themselves stuck between a rock and a hard place. With most inflows headed for low-cost ETFs the dilemma is whether to charge more to boost revenue and risk losing investors or prioritize asset growth and accept rock-bottom fees?

The key for issuers who want to charge a premium is to find a way to justify their compensation. Promise a better way to slice Market X, the first chance to buy Asset Y or a more sophisticated bet on Strategy Z, and you stand a chance of convincing investors to part with their cash.

About 42 percent of the 252 funds launched last year charge $5 or more for every $1,000 invested, data compiled by Bloomberg show. That’s relatively expensive when you consider the biggest ETF -- State Street’s SPDR S&P 500 ETF -- costs 90 cents and nine of the 10 largest funds carry fees of $2 or less. But with the median expense ratio for ETFs rising to $4.80 per $1,000 invested, it’s clear the trend for smaller funds is to shoot for higher fees. Some deliver, but with over 1,800 ETFs in the U.S., many more don’t.

“What is left to be done that hasn’t been done?” said Josh Brown, chief executive officer of Ritholtz Wealth Management. “I really don’t think there’s an opportunity for another thousand ETFs to come along, or another hundred ETFs even, and that any of them are really going to gain any kind of scale. And it’s a scale business.”

Still, Brown doesn’t think launches will slow. After all, “hope springs eternal,” he said. Over the last few months, companies have started hot funds linked to blockchain technology and marijuana, a product that uses leverage to juice retiree returns, and even an ETF that tracks the performance of the ETF industry. All of them charge more than $6 for every $1,000 invested.

There are, however, signs that the party’s starting to sour. State Street closed more funds than it started in both 2016 and 2017, according to Jim Ross, chairman of the firm’s global ETF business. While such pruning can lead to more efficient operations and create opportunities for others, it’s a clear reminder that not everyone makes it.

More than 120 funds shut last year, including two by Direxion Funds, which specializes in leveraged ETFs, that lasted less than 12 months. Elkhorn Investments, set up in 2013 by a former executive from Invesco Ltd.’s PowerShares unit, closed 11 of its 15 funds. And Tuttle Tactical Management shuttered both of its ETFs.

“Fads and things like that are part of how capital markets work, and we can only wish them well,” said  Richard Michaud, who manages or advises on almost $4 billion as chief executive officer at New Frontier Advisors. “But it may not be a very long term strategy.”

Perhaps this is comedy gold waiting to be mined by ‘‘The Daily Show’’ correspondents when they entertain conference-goers at lunch today. Or perhaps not.

Mass liquidations were just a bad dream when the industry first gathered for this week’s confab 10 years ago. Back then it was held at an out-of-the-way hotel 40 minutes from downtown Boca Raton. And the talk was of how to build a new kind of fund business that could challenge mutual fund supremacy.

So in a sense, mission accomplished. But in the process, has a sense of proportion been lost? 3Edge’s Cucchiaro remembers the conference’s earliest days. For him, the lower fees that competition has brought outweighs most of the noise. But the glitz and glamor of this year’s gathering? He’s less sure about that.

“It could be a sign we all look back on,” he said.