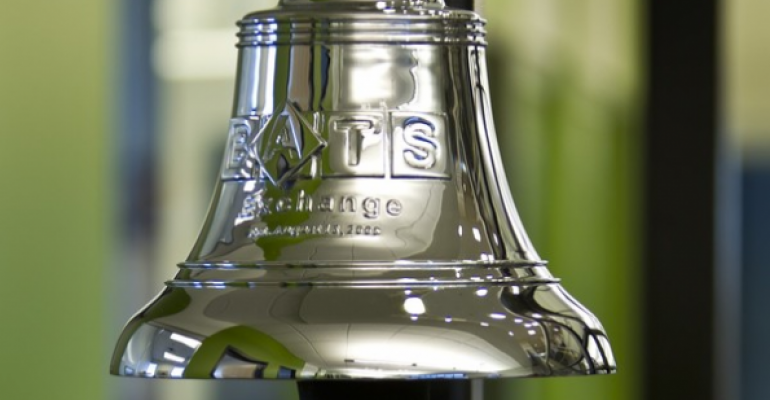 ETF Gold Mine Is Prize in CBOE’s $3.2 Billion Bats Acquisition

The acquisition, announced Monday by the owner of the Chicago Board Options Exchange, gives CBOE a major player in U.S. and European stock trading. Though regulatory and technological changes have largely diminished profits for stock exchanges, ETFs are breathing new life into the business. Bats handles about a quarter of ETF trading volume in the U.S., giving CBOE a significant beachhead.

“This combination gives more power not only to listing of ETFs, but also to the trading of ETFs,” Bats CEO Chris Concannon said Monday during a call with analysts and reporters following the CBOE deal announcement. “The scale we will achieve as a combined company allows us to be that much more aggressive.”

For many investors, ETFs are replacing huge swaths of traditional assets, including individual stocks, bonds and mutual funds. U.S. assets have swelled to $2.4 trillion, more than double five years ago, according to data compiled by Bloomberg. Exchanges want a piece of the action. Atlanta-based Intercontinental Exchange Inc. dominates through its ownership of NYSE Arca, which lists ETFs worth $2.23 trillion, while Nasdaq Inc. is offering incentives to boost trading of the products. Lenexa, Kansas-based Bats recently lured ETF executive Laura Morrison from NYSE and bought ETF.com, a data and news provider for the industry as Concannon aims to unseat ICE as the top ETF venue.

CME Group Inc. is glaringly absent. Valued at $36 billion, the Chicago-based company is the biggest exchange operator in the world, but it doesn’t offer ETFs -- though it’s exposed to the business through its stake in index compiler S&P Dow Jones Indices.

ETFs trade like stocks and contain baskets of securities or derivatives. CBOE currently only trades options linked to the funds, while Bats has staked its reputation on ETF trading, which relies on nimble, fast technology. As part of the deal, CBOE is scrapping its trading software for Bats’s technology, regarded as some of the best in the industry.

Combining with Bats to provide marketplaces for both ETFs and ETF options could give CBOE a boost as it looks to challenge Jeff Sprecher’s behemoth Intercontinental Exchange, which offers both options and equities trading, according to Spencer Mindlin, an analyst at Aite Group LLC.

“If it’s under one roof, they’d be in a pretty good position to turn around some options-plus-ETF products that market participants could take advantage of,” Mindlin said. “That potentially gives them a leg up, the ability to offer products that combine listed options on ETFs with the underlying ETF product.”

To whip up more ETF trading on its venues, this month Bats started offering cash incentives to market makers that offer to buy and sell the products. Concannon has said he wants to turn Bats into the top listing venue for ETFs in the next three to five years, but ICE is a formidable incumbent. Nasdaq has also tried to expand its footprint in ETF trading and listings, introducing a program to share trading revenue with market makers this year.

“We’ve seen ETFs take volume away from everything, including single securities and derivatives,” said Eric Balchunas, an ETF analyst at Bloomberg Intelligence. “The institutional world tends to view ETFs as a competitor to a derivative.”

There is $3.4 trillion invested globally through strategies that mimic indexes, according to Richard Redding, chief executive officer of the Index Industry Association, whose organization represents companies including S&P Dow Jones Indices and MSCI Inc. That compares with about $2.9 trillion in hedge funds.

“Indexes are driving a lot of the investment decisions,” Redding said. “The index/ETF business is larger than the hedge fund business.”

Redding said that for CBOE, the rationale for buying Bats may have boiled down to upgrading the company’s technology, entering the ETF business and complementing CBOE’s existing index division, which includes the VIX, a key measure of market volatility. Redding used to work for CME Group, operator of the world’s biggest derivatives exchange.

If the deal is approved by regulators, CME Group would be left as the last major U.S. exchange operator without the ability to trade ETFs, as it currently doesn’t offer securities-based products. That may be starting to change. Part of the company’s strategy is to expand its reach to retail customers, according to a person familiar with the matter. CME Group’s revenue from retail trades grew 22 percent to $135 million compared with the same period in 2015, said Laurie Bischel, a spokeswoman.

As the exchange seeks to draw more retail users to its markets it could expand into other products such as ETFs, said the person, who asked not to be named discussing strategy. That would require CME Group to acquire or build a securities market under the supervision of the U.S. Securities and Exchange Commission. Ownership of CBOE or Bats would trigger such regulation. Bischel declined to comment on whether CME would buy a securities exchange.

The CBOE and Bats deal is expected to close in the first half of 2017, according to the companies. The combined entity would be based in Chicago, with CBOE CEO Edward Tilly remaining in his current role. Concannon will become president and chief operating officer.