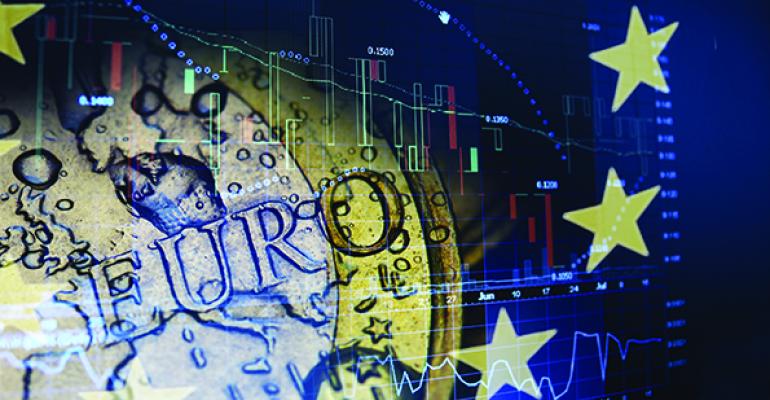 The European ETF market may grow to $1.1 trillion by 2020 from $725 billion now as indexing gains traction.

By Sarah Jones and Ivan Levingston

The firms are seeking to gain in a region that’s flush with $2.5 trillion in pension savings and poised for a surge in exchange-traded fund issuance. Managers on the continent are also struggling to adapt to revised MiFID regulations and dealing with the uncertainty of the U.K.’s exit from the European Union.

The European ETF market may grow to $1.1 trillion by 2020 from $725 billion now as indexing gains traction, according to Bloomberg Intelligence. That’s presenting U.S. firms with an opportunity to disrupt domestic managers who generally charge higher fees than in the U.S.

Invesco, the Atlanta-based fund firm with about $810 billion in assets under management, agreed to purchase European ETF provider Source in April. That deal brought in $18 billion in managed assets at a 30 to 31 basis point fee margin, according to Bloomberg Intelligence analyst  Eric Balchunas.

In June, BlackRock purchased a stake in European robo-adviser Scalable Capital, as the firm seeks to provide Europeans with a variety of investment choices whether through digital advice or low-cost products that help consumers invest over the long term.

“The key issue for Europe is over 72 percent of all savings is in cash,” BlackRock CEO Laurence D. Fink said on a July 17 earnings conference call. “Most savers are only in cash and bank deposits.”

Some firms have also pursued deals to expand in Europe such as Janus Capital Group Inc., which merged earlier this year with London-based Henderson Group Plc.

Yet for all its promise, Europe is a complex market with regulations that vary by country, according to Dean Frankle, a principal at Boston Consulting Group in London. It’s more fractured than the U.S.

Asset managers are increasingly occupied with MiFID II, the overhaul of EU financial-services regulations that goes into force in January. Among the thorniest provisions is the requirement that brokerages charge money managers for research, rather than offering it as a free perk. A June survey showed most executives were behind schedule in implementing the revised Markets in Financial Instruments Directive.

“We’re seeing regulatory changes change the ETF environment,” Fink said in the call with analysts. “We do believe we’re seeing accelerated flows” in part because of MiFID II.

There’s also growing pressure on fees that could help providers of low-cost funds like ETFs win market share. A U.K. regulator is cracking down on the asset management industry to help weed out overcharging. It’s backing a single “all in fee” for investors that includes asset-management charges, an estimate of transaction costs and intermediary fees to combat overcharging.

While BlackRock sees opportunities for growth with its ETFs, it can also charge higher fees on its European assets than dollar-denominated products, Chief Financial Officer Gary Shedlin said on the firm’s first quarter earnings call. The company brought in $3.1 billion in revenue from Europe in 2016, making it BlackRock’s second-largest region by revenue after the Americas at $7.53 billion.

“We make more money managing assets outside of the United States in terms of fee rates,” whether it’s in emerging markets, Europe, or Asia, Shedlin said at the Morgan Stanley Financials Conference in June.

ETFs are “a core plank” of State Street Corp.’s growth in Europe, according to Rory Tobin, co-head of the firm’s global SPDR business.

“ETF adoption in Europe is particularly strong in areas like emerging market fixed income,” he added. The Boston-based firm added $5 billion in assets for its SPDR ETFs during 2016 in the Europe, Middle East and Africa region.

Eaton Vance is seeing strong demand among European investors for income strategies. The firm has doubled its staff in London to 40 employees in the last two years and wants to hire an additional 10 in the next year. It plans to open an office in Germany by year-end.

“We are 5 percent of the assets but 10 percent of the growth,” said Tjalling Halbertsma, head of global distribution at Eaton Vance Management (International) Ltd. in London. “We have done very well in the States but there is a lot more to do outside.”

That work can be knotty. “You have to speak different languages, understand different cultures, rules,” Halbertsma said. “You have to understand that Europe is a very competitive sophisticated institutional market and you need to offer something that’s 100 percent perfect.”