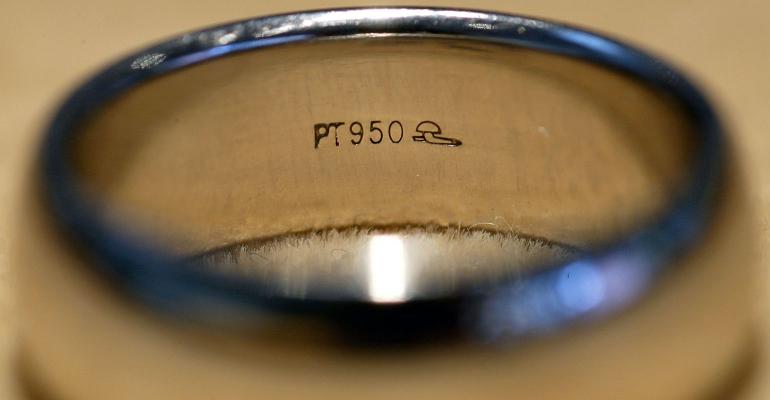 The price of platinum dropped this month amid prospects for higher U.S. interest rates and speculation that demand will slip for the metal used in auto pollution-control devices.

(Bloomberg) --Exchange-traded fund investors are staying hot on platinum, even as money managers get cold feet on the metal.

Holdings in platinum-backed ETFs posted a sixth straight weekly gain on Friday, the longest stretch since November. That came after U.S. money managers slashed their net-long position in the metal by more than half, the most in data going back to 2006.

Platinum, which climbed through the first two months of the year, has dropped this month amid prospects for higher U.S. interest rates and speculation that demand will slip for the metal used in auto pollution-control devices. ETF investors are looking beyond the short-term price weakness and focusing on the outlook for shortages that could propel prices over the longer term, according to Maxwell Gold at ETF Securities LLC.

“There’s going to be a lot more volatility in terms in terms of price in the coming months, with such a tight market balance driving global platinum holdings,” said Gold, New York-based director for investment strategy of ETF Securities, the largest platinum-backed ETF provider. “We’ve seen a draw-down of Nymex inventories, meaning that demand is outpacing supply.”

Inventories held at warehouses tracked by the New York Mercantile Exchange fell for a fourth straight week through Friday to a six-month low, according to bourse data compiled by Bloomberg. Platinum futures for April delivery slipped 0.7 percent to $965.60 at 8:13 a.m. in New York on Tuesday.

Consumption will outpace supply by 120,000 ounces this year, the fifth straight year of deficit, according to a March 9 forecast by the World Platinum Investment Council, created by the six leading producers of the metal to stimulate investor demand. While New York-based CPM Group expects the metal to be in surplus the next few years, most of the inventories at the end of 2016 were held by investors, and they’re expected to continue absorbing that excess production, the New York-based forecaster said in a January report.

Total platinum supply is forecast by the World Platinum organization to drop 4 percent to 7.66 million ounces in 2017 as South Africa, which accounts for 70 percent of world output, closes unprofitable operations and resources from its other mines get depleted.

Prices got a jump-start last week after the Federal Reserve said it plans to stick to a “gradual” path of interest-rate increases, easing concerns that policy makers would accelerate their timetable and bolstering the appeal of non-interest bearing precious metals. Platinum climbed 2.3 percent on March 16, the most since Jan. 24.

Still, the metal has been trading in a bear market since October. Some investors soured on platinum, used in catalytic converters that help limit pollution from diesel vehicles. Automakers are introducing more electric cars, and diesel has been losing popularity in the wake of Volkswagen AG’s emissions-cheating scandal.

In Europe, the largest user of the metal in cars, automotive-sales growth cooled in February as political uncertainty clouds the area’s economic outlook.

Bulls are looking for economic momentum in China to help underpin demand at a time when mine production is declining. Retail sales in the Asian nation climbed 9.5 percent in the first two months of the year, while industrial output advanced 6.3 percent, according to National Bureau of Statistics data showed in early March. The country is the biggest consumer of platinum used in making jewelry and electronics, and in refining petroleum, according to CPM Group.

Last week, about $9.2 million went into ETFS Physical Platinum Shares, the biggest inflow into since Feb. 17. Money piled into the largest U.S.-listed ETF backed by the metal as platinum prices climbed 2.6 percent, the most in more than two months.