Does Your ETF Own Tesla?

Tesla is underowned in exchange traded funds, despite a market capitalization larger than Ford and GM.

Despite the fear that growing demand for index-based investments has created a bubble in the stock market, Tesla (TSLA) in 2020 is a perfect counterpoint. Shares in the auto manufacturer are underowned by ETFs and index mutual funds given its approximately $140 billion market capitalization.

There are 121 ETFs that own TSLA, fewer than the 174 that own Ford (F) and the 184 that own General Motors (GM), even though TSLA has a much higher market cap than those manufacturers. We think the major cause of the disparity is that TSLA is not in the S&P 500 Index.

Unlike some other broadly diversified indexes that are behind ETFs like the iShares Russell 1000 ETF (IWB), the S&P 500 Index requires a company to generate four consecutive quarters of positive GAAP earnings before the stock is eligible to be added following a vote by the index committee. While TSLA reported GAAP EPS of $0.58 in the fourth quarter of 2019, pushing its string of positive earnings to two quarters, CFRA equity analyst Garrett Nelson highlights that Tesla executives announced a delay in vehicle deliveries from its recently started China factory due to the coronavirus outbreak. Tesla expects the production line to catch up once the outbreak mitigates and the factory reopens, but the timeline is unclear. Nelson views the China situation as critical in terms of TSLA’s ability to post a GAAP profit for the first two quarters of 2020. 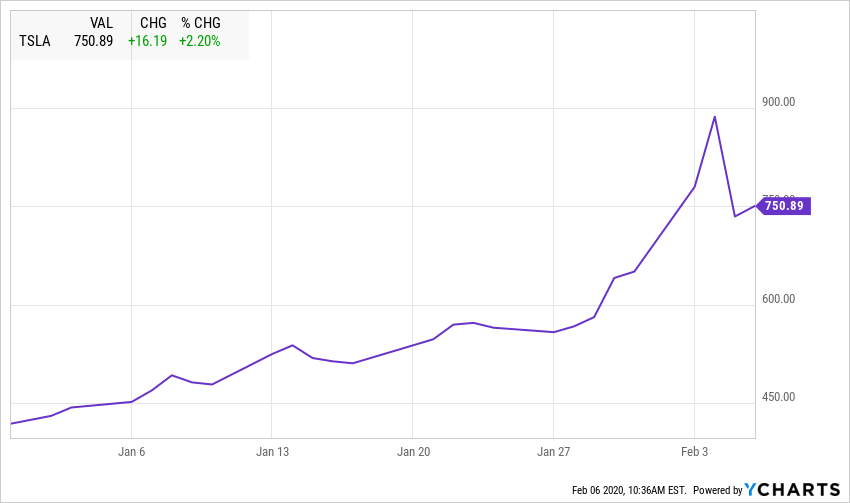 Nelson has a sell recommendation on TSLA, as he views the stock’s current risk/reward as unfavorable. There are significant risks related to the China factory ramp-up, as well as rising competition from automakers still eligible for the full federal tax credit in the U.S.

So too in the many other ETFs that track narrower slices of the index.

Sector funds are not the only place where a holdings-based approach is insightful. For example, iShares Russell 1000 Growth ETF (IWF) has TSLA among its top 30 positions as of February 3. However, the stock is not eligible for the iShares S&P 500 Growth ETF (IVW) or Invesco S&P 500 Pure Growth (RPG) that track S&P benchmarks.

Meanwhile, there are dozens of funds that are constructed based on fundamental, momentum or ESG attributes of the S&P 500 constituents—but are not giving TSLA a first glance. While some, like AAM S&P 500 High Dividend Value ETF (SPDV), are not waiting with bated breath for the company’s inclusion in the parent index, others like Xtrackers S&P 500 ESG ETF (SNPE) might find Tesla worth owning.

So, if TSLA can’t yet be found in some of the more popular broadly diversified or more narrowly constructed S&P 500 Index ETFs, where else can investors find it?

The stock is the largest position in some actively managed funds from ARK Invest. The firm owns a double-digit percentage of assets in ARK Innovation ETF (ARKK) and ARK Next Generation Internet ETF (ARKW). Meanwhile, certain thematic ETFs such as Global X Lithium & Battery (LIT) and VanEck Vectors Low Carbon Energy ETF (SMOG) have Tesla at or near the top of the portfolio.

As for the largest ETF owner of Tesla, as opposed to owners of the highest stakes, that distinction goes to Invesco QQQ Trust (QQQ), which owns approximately $1.4 billion worth of the automaker, equal to 1.5% of its total assets.

Tesla stock moves in 2020 serve as reminder why investors need to look inside the fund they own or are considering since most have distinct security inclusion criteria. Securities held by ETFs that sound similar very often are anything but.