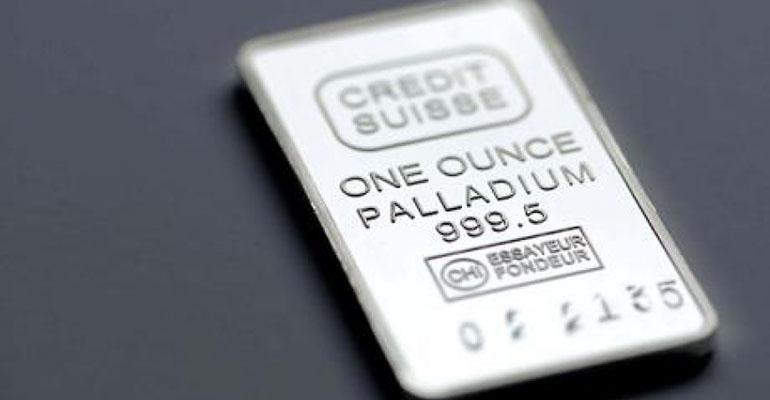 Holdings in exchange-traded funds backed by the metal have been hovering near a seven-year low since January.

(Bloomberg) --The rally that propelled palladium to this year’s best-performing precious metal is showing signs of cracks.

Holdings in exchange-traded funds backed by the metal have been hovering near a seven-year low since January. The $8 billion Baillie Gifford Diversified Growth Fund has pared its position in ETFS Palladium, after exiting Source Physical Palladium in late 2016, according to data compiled by Bloomberg. Car sales in the U.S. and China are slowing, triggering demand concerns for the metal that’s mostly used to cut emissions in gasoline-fueled vehicles.

Palladium has climbed about 24 percent in 2017, after the best annual rally in six years, amid speculation production won’t be enough to meet demand. Hedge funds and other large speculators piled in, taking their net-bullish bets on the metal last month to the highest in more than two years. That optimism has faded as money managers have pared their wagers for four straight weeks. Prices will “correct soon,” according to Commerzbank AG analysts.

“We think the bulk of the increases for this year have occurred already,” Jeffrey Christian, the New York-based managing director at researcher CPM Group, said in a telephone interview. “We’re going to see some weakness in the third quarter, partly because of the seasonality in the auto demand, and partly just because of profit-taking,” before prices rebound in the fourth-quarter, he said. In the U.S., the annualized car sales rate, adjusted for seasonal trends, slipped to 16.7 million last month, according to Autodata Corp. Analysts had projected a 16.8 million pace, down from 17.2 million a year earlier. There are signs of more trouble ahead.

Lenders are tightening the spigot on new auto loans, making it harder for U.S. consumers with weak credit to buy a car. In March, S&P Global Ratings said U.S. subprime lenders are losing money on car loans at the highest rate since the aftermath of the 2008 financial crisis. Automakers are aiming to draw down bloated inventories by ratcheting back output, dimming demand prospects for the metal used in car pollution-control devices. Metals brokers at Zaner Group in Chicago, whose clients include palladium recyclers, are hearing about worries over waning physical demand from automakers.

“They’re seeing good receipts of catalytic converters -- product is coming in for recycling -- but demand just isn’t as high,” Peter Thomas, a senior vice president at Zaner, said in a telephone interview, referring to his clients who are palladium recyclers. “I think the bullishness that has pushed us up is running out of steam, from the fundamental standpoint.”

One possible explanation for the continued rise in palladium prices is tight supplies, according to Kirill Kirilenko, a London-based precious metals analyst at CRU. He’s heard that some traders have been having difficulty sourcing palladium ingot over the last few weeks.

“This market has become a bit muddy recently, and it is true to say that it is not unusual for palladium’s price performance to be at odds with this market’s fundamentals,” Kirilenko said in an email.

Palladium for immediate delivery fell 0.1 percent to $841.35 an ounce at 8:20 a.m. in New York on Monday, after touching the highest since 2014 earlier. With prices of the metal climbing about 51 percent over the past year, many ETF investors aren’t waiting for more clarity.

ETF Securities, the largest provider of palladium-backed ETFs, has already witnessed some profit-taking by investors. In January, the Channel Islands-based company, which currently oversees $317 million in funds listed in New York, London and Sydney, had one client sell $110 million of the metal, said James Butterfill, company’s London-based head of research and investment strategy. The firm’s palladium holdings shrank by a quarter in January, and are now the lowest since September 2009, data compiled by Bloomberg show.

“It’s just taking profit for the year and reallocation” of assets, Butterfill said in a telephone interview, declining to name the client that sold the metal.

Executives at Baillie Gifford, which exited its position in Source Physical Palladium, and cut its holdings in ETFS Palladium, declined to comment beyond confirming their recent moves, when reached through their spokesperson from public relations firm Four Broadgate.

“The auto market in the U.S. and China is in the matured stage of its upward cycle,” CPM’s Christian said. “There is some concern, that while the palladium market is strong, it’s strong partly because auto sales have been relatively good in those two markets, but how much longer can it continue?”