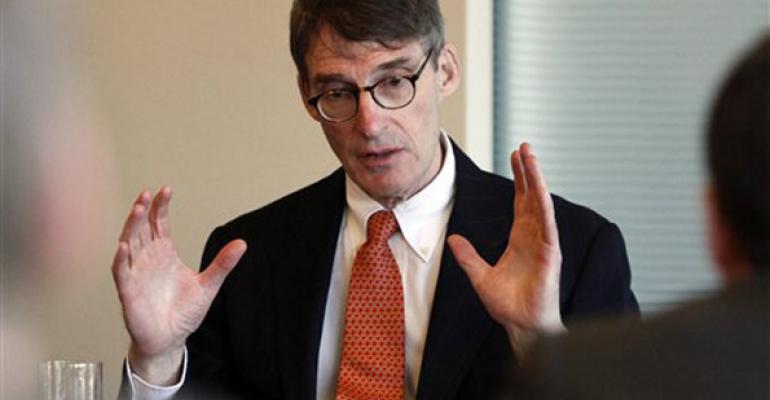 Investors attend the annual Sohn Investment Conference to hear talks by noted hedge fund managers who can move markets with their pronouncements. This week’s event in New York made its share of waves when David Einhorn urged investors to short Athenahealth (ATHN) and Bill Ackman suggested buying Fannie Mae (FNMA).

Schreiber said that oil production in the U.S. is booming because of the breakthroughs in hydraulic fracturing techniques. During the next year, production should increase by 1 million barrels a day. That pace should continue for the following two years. Canadian production will increase at a rate of 300,000 barrels. As supplies soar, prices will drop.

Schreiber said that oil is now at around $100 a barrel, and many traders are betting that prices will rise. He said that prices have been propped up by temporary factors. Inventories are currently low in Cushing, Okla., a major storage center. But he predicted that the Cushing supplies would move from a shortage to a surplus this year.

James Grant, editor of Grant’s Interest Rate Observer, suggested buying Gazprom (OGZPY), the leading Russian gas company. Since the Russian moves into Ukraine, Gazprom has come to rank as one of the most reviled businesses in the world. That has made the stock intriguing, said Grant, who quoted Sir John Templeton as saying that investors should buy at “points of maximum pessimism.”

Grant said that the company has clear weaknesses. Half the company’s exports to Europe move through Ukraine, where the free movement could be disrupted. In addition, sales could be hurt by weakening European consumption. The Russian government owns 55 percent of the company, and state bureaucrats have interfered with the functioning of the business. Still, the stock ranks as a bargain because the price is so cheap. The shares trade for 2.4 times this year’s estimated earnings. “Good things do tend to happen to cheap stocks,” he said.

Grant said that the company has $150 billion in revenues, a solid balance sheet, and enough operating income to cover interest expenses by a factor of 40. The stock pays a 5 percent dividend. Investors who buy Exxon Mobil (XOM) pay $17.60 for each barrel of reserves. The equivalent figure for Gazprom is $1.39.

Chris Shumway, managing partner of Shumway Capital, recommended Moody’s (MCO). The company continues to dominate credit rating along with Standard & Poor’s. Moody’s offers a compelling value to bond issuers, he said. The company charges issuers 0.05 percent to rate a bond. And by receiving a rating, issuers can lower the yield on their bonds by 1.5 percentage points. While Moody’s and Standard & Poor’s rate virtually every public company in the U.S., they do not cover most companies in Europe. International expansion should enable Moody’s to increase its revenues at an annual rate of 10 percent to 13 percent.