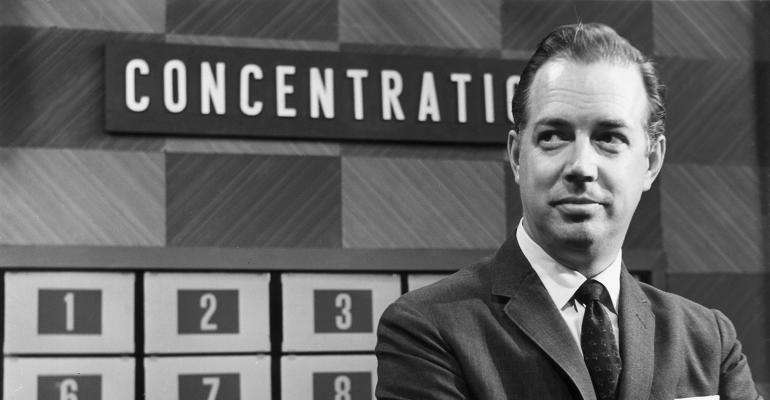 Earlier this month, long-time broadcaster Hugh Downs died at the ripe old age of 99. (Full disclosure: I worked with Hugh during his tenure as a PBS host in the early ’80s). Among his many network gigs was an 11-year stint as host of the game show “Concentration,” which challenged contestants to recall the placement of prize tiles to solve a puzzle.

There’s another version of concentration that often confronts investors, one that sometimes offers prizes and at other times aggravated losses. A portfolio is deemed concentrated when an inordinate exposure to an individual stock, sector or style is countenanced. Sadly, there’s no hard-and-fast definition of inordinate exposure but, like Supreme Court Justice Potter’s description of pornography, you’re likely to know it when you see it. That is, IF you can see it.

Often, concentration is implied through its opposite number—breadth. While measures of market breadth abound, there’s one simple-to-follow metric that sheds light on the concentration found in that most ubiquitous of benchmarks, the S&P 500 portfolio.

By taking the price ratio of the Invesco S&P 500 Equal Weight ETF (NYSE Arca: RSP) over the SPDR S&P 500 Trust (NYSE Arca: SPY), you can actually see concentration in action. RSP, as its name implies, takes all the S&P stocks and weights them equally. SPY, like the index it tracks, weights its stock holdings by their market capitalizations.

Cap weighting allows portfolio positions to rise and fall as share prices and floats vary. As investor interest in Amazon.com Inc. mushroomed, for example, so too did its heft in SPY. Five years ago, AMZN was a $400 stock. Now it changes hands at nearly $1,600 a copy and accounts for nearly 5% of SPY’s total capitalization. At the opposite extreme is lowly Coty Inc., claiming just a half-percent of the ETF’s market value. The upshot? As AMZN goes, so goes SPY. COTY’s influence on SPY’s market direction is negligible.

The equal weighting scheme employed by RSP, on the other hand, gives small stocks like COTY greater expression in the Invesco fund’s pricing. COTY and AMZN are nearly co-equal determinants of RSP’s market direction.

This differential is prima facie evidence of greater concentration (read: diminished breadth) in the SPY portfolio.

Concentration’s trend is reflected in the chart below. The breadth (RSP/SPY) ratio highlights how concentration ebbs and flows in the broad market proxied by the S&P 500.

The ratio’s been downtrending since the November 2016 election and has now sunk well below its one-year moving average. Breadth is shrinking to levels last seen in the depths of the 2008-2009 Great Recession. Still, SPY’s ever mounting concentration has been, in large part, good for passive investors. Recently, the average annual gain for SPY has been 13%; for RSP, it’s been just 8%. 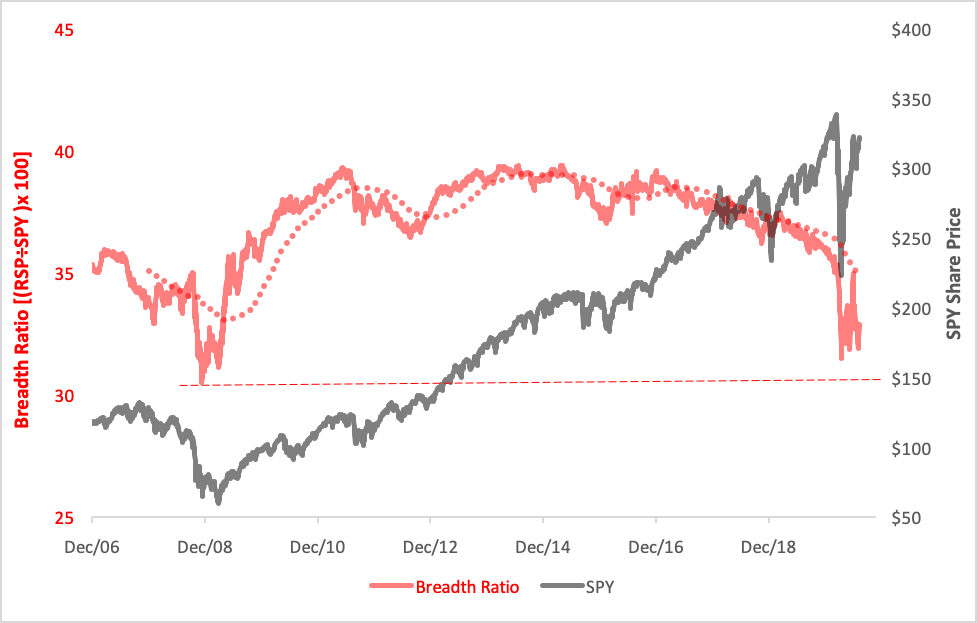 You can account for the return differential along more than one spectrum. The most obvious, of course, is the capitalization allocation. SPY’s total market weight breaks down to 88% large-cap stocks and 12% mid caps. RSP’s a much more balanced portfolio—48% large caps, 50% mid caps and 2% small stocks.

The picture changes if you look at return attributions, though. All of SPY’s returns arise from large caps and large caps only—55% from growth issues, 45% from value stocks. RSP’s returns are more dispersed—32% from large value, 25% from large growth and 37% from mid-cap value. Smaller stubs can be attributed to mid-cap growth and other exposures.

Even more remarkable are the sector biases that arise from the weighting schemes. The largest disparity is found in information technology. IT makes up nearly a quarter of SPY’s capitalization, more than twice its heft in RSP’s portfolio. The gap in communication services is also large. RSP’s allocation to comm stocks is 40% lighter than SPY’s. It’s the basic materials and industrials sectors that make outsize appearances in the RSP sector mix.

Factorwise, RSP leans toward low size and away from momentum and low volatility.

All this is good to know if you’re just making a choice between RSP and SPY as your broad market exposure. But how can you measure your concentration risk if your asset mix tilts toward an alternative approach such as dividend income? What if you elected to forgo SPY in favor of, say, the Schwab U.S. Dividend Equity ETF (NYSE Arca: SCHD), a fund that tracks the Dow Jones U.S. Dividend 100 Index?

SCHD is a cap-weighted fund that uses fundamental screens to select a 100-stock portfolio of large-cap issues with dividend-paying track records of 10 years or more. Dividend payers are an overweight favorite of retirees and conservative investors.

You can quite simply quantify an investment’s concentration risk through the Herfindahl-Hirschman Index (HHI). The HHI value is found by summing the squares of a portfolio’s component weights. SPY, for example, currently sports a 68 (%) HHI. SCHD owns a 270 HHI. Knowing this, you can say that SCHD is four times more concentrated than SPY. Such thinking casts the wisdom of a large allocation to a seemingly “safe” investment like SCHD into question. Owning dividend payers may be a good income strategy, but it exposes an investor to significantly higher market risk, regardless of its correlation to a particular benchmark.

Concentration, like leverage, is a two-edged sword. It magnifies returns when heavily weighted stocks are favored but is a drag when investors shun those issues. Recently, concentration has been a blessing on investors inclined toward market-cap exposure. There inevitably comes a point when such approbation wanes. The wise portfolio builder will have diversifying allocations at hand that can mitigate the effects of such a reversal.

Which leads to the question: How wise are YOU?