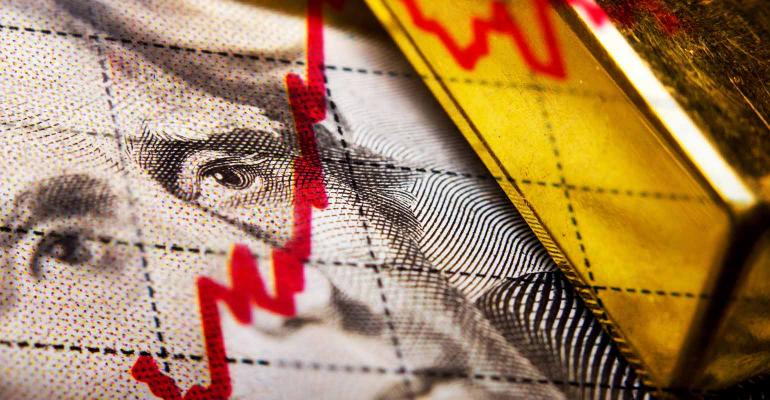 There’s more to it than ownership of a single asset. Here are the five most active broad-based commodity ETFs and what makes them tick.

“The more you look at ‘common knowledge,’ the more you realize it’s more likely to be common than it is to be knowledge.” —Idries Shah

It’s commonly assumed that one of gold’s primary utilities in a portfolio is as an inflation hedge.

When you regard gold’s recent price movements, however, they really don’t line up well with inflation expectations. The chart below shows you this explicitly. Gold comes up wanting when tracked against the trajectory of the five-year breakeven inflation (BEI) rate—a proxy for expectations of change in the Consumer Price Index. 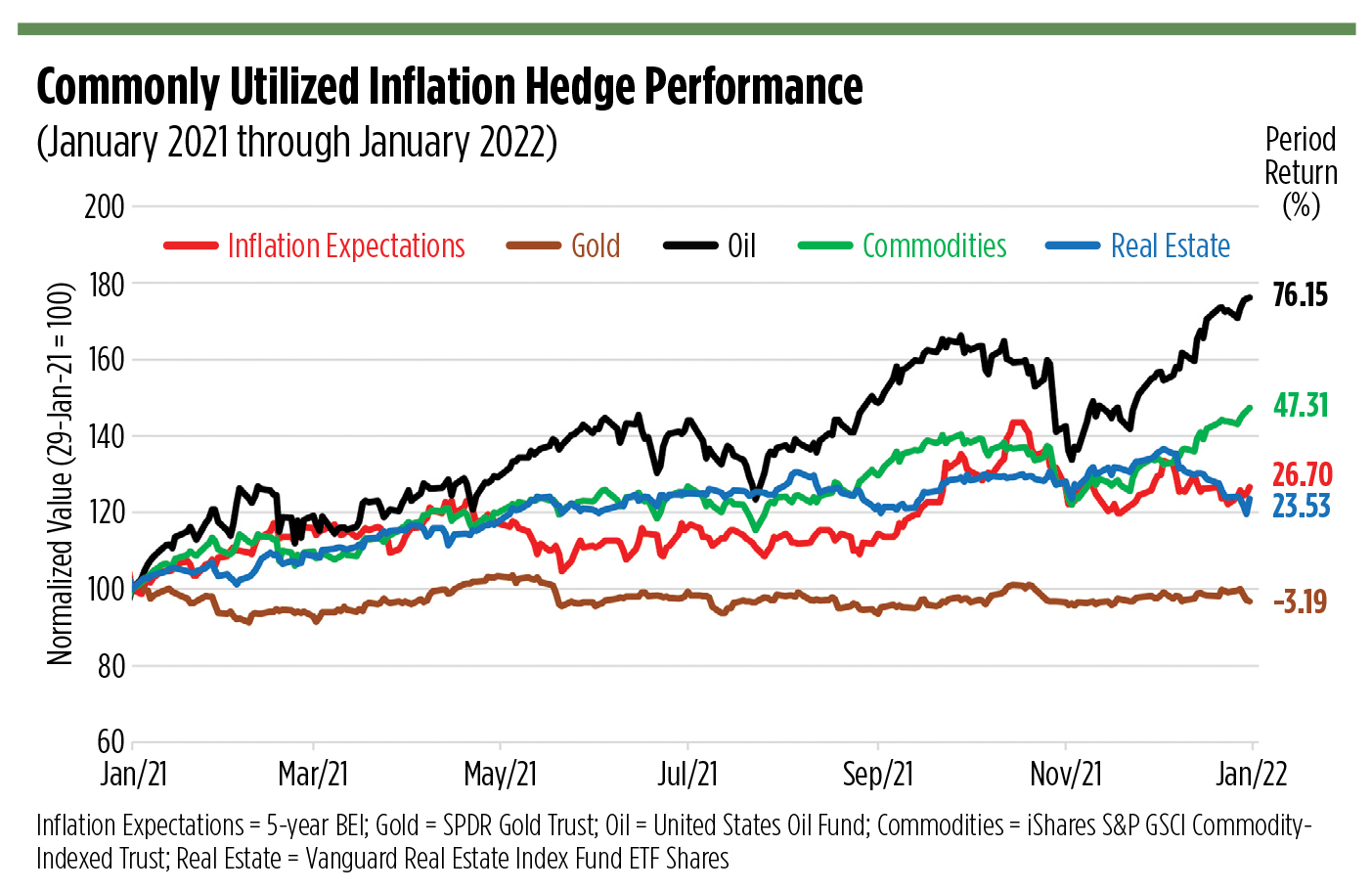 On a day-to-day basis, the broad-based commodity market’s actually been the best tracker of the volatility in inflationary expectations. It’s sort of a happy medium bracketed by oil’s overshoots and gold’s lethargy.

That leads us to wonder how to access commodities’ hedging power most efficiently. There are a baker’s dozen broad-based commodity ETFs extant, but these have been the year’s most active:

The iShares S&P GSCI Commodity-Indexed Trust (GSG), launched in 2006, is a first-generation portfolio that tracks a long-established commodity futures benchmark. Though its underlying index is an amalgam of diverse front-month commodities, it’s hardly a neutral benchmark. Because it’s production-weighted, crude oil, natural gas and other energy contracts make up close to 60% of the fund’s commodity exposure. Thus, metals, agriculture and livestock are given short shrift. And, unlike other futures-based portfolios organized as pools, GSG doesn’t hold positions in disparate commodity futures contracts. Instead, it holds only long-dated GSCI index futures. Open positions in GSG are subject to a year-end mark to market with gains taxed at a maximum blended rate of 27.8%. Shareholders receive a Schedule K-1 at tax time instead of a Form 1099.

The methodology behind the United States Commodity Index Fund (USCI) is more dynamic than that driving GSG. USCI tracks the SummerHaven Dynamic Commodity Index, an equal-weighted portfolio of 14 commodity futures selected on the basis of their pricing and momentum. The portfolio changes monthly as seven commodities with the greatest degree of backwardation—or the smallest contango—are tapped for inclusion as well as seven commodities exhibiting the highest 12-month price momentum, with the proviso that each reconstitution yields at least one precious metal, one industrial metal, an energy commodity, a livestock future, a soft commodity and a grain contract.

“The SummerHaven Dynamic Commodity Index uses a research-based approach to target commodities in a low-inventory state,” says Kurt Nelson, founder and managing partner of SummerHaven Investment Management. “This approach differs significantly from traditional commodity index benchmarks with fixed commodity weights based on liquidity, production and size.” Equal weighting, he adds, helps to maximize diversification and lower volatility in his portfolios.

USCI, like GSG, is a commodity pool subject to year-end marking to market and K-1 tax reporting.

(Contango represents a futures curve in which contracts for near-term delivery are priced at a discount to later deliveries. The difference in pricing typically is made up of storage and interest costs, reflecting relatively ample supplies; backwardation, or inversion, is characterized by near-term deliveries priced at a premium to deferred contracts and exists most often when supplies are tight. Rolling an open futures position into a forward month results in a negative roll yield while a market’s in contango, but a positive yield when a market inverts).

A sibling to USCI, the USCF SummerHaven Dynamic Commodity Strategy No K-1 Fund (SDCI) purports to be actively managed but utilizes virtually the same methodology as USCI to derive its portfolio. SDCI’s essential distinctions include the size and management of its cash component, its dividend policy and, most importantly, its organizational structure. SDCI is an open-ended ETF, not a commodity pool. That workaround is facilitated by its investment in a Cayman Islands subsidiary that actually holds the futures portfolio. As such, shareholders receive a Form 1099 at year’s end instead of a K-1 return.

The Invesco DB Commodity Index Tracking Fund (DBC) simulates the DBIQ Optimum Yield Diversified Commodity Index, which selects each of its 14 constituent contracts by rolling to the futures month—within the next 13 months—generating the maximum implied roll yield. Futures are drawn from the energy, precious metals, industrial metals and agriculture sectors. No livestock futures are included. Structured as a commodity pool, gains are taxed based on a year-end mark to market.

DBC’s younger sibling, the Invesco Optimum Yield Diversified Commodity Strategy No K-1 ETF (PDBC), like USCI, employs a Cayman subsidiary to hold its futures portfolio and thereby avoid registration as a commodity pool. Nominally an actively managed fund, PDBC’s commodity portfolio is nearly identical to that of DBC but explicitly aims to outperform DBC’s underlying index. As Theodore Samulowitz, Invesco’s senior portfolio manager for alternative strategies, puts it, “Each month, we revisit the futures curves, taking into consideration market fundamentals, and adjust our positioning. This is in contrast to DBC, which, once it rolls a position, holds that position ’til the month prior to expiry.”

PDBC shareholders pay taxes on ordinary income and capital gains as they would with any stock, ETF or mutual fund.

Setting GSG as a benchmark, a side-by-side comparison of the portfolios’ recent track records allows us to see how their distinct organizational structures and management styles impacted their effectiveness as inflation hedges.

The brace of the USCF and Invesco portfolios clearly tamed some of the volatility that GSG exhibited over the past year, resulting in smaller drawdowns and better Sharpe ratios. The downside truncation came at the expense of some upside, however.

“PDBC and DBC both utilize an optimum roll yield methodology,” says Invesco’s Samulowitz. “That allows our funds to minimize drawdowns when commodity curves are in contango and capture the roll yield when curves are in backwardation. Front-month rolling strategies, like that employed by GSG, typically suffer high roll costs when markets are in contango.”

The optimization strategies employed by USCF and Invesco, together with the ETF structure of the firms’ actively managed portfolios, yielded some surprises to many holders of SDCI and PDBC in 2021. Trailing 12-month yields were 19.33% and 50.94%, respectively, largely as a result of ordinary income realized from rolls inside the portfolios. As ’40 Act funds, SDCI and PDBC are obliged to pay out commodity-related profits.

SDCI realized its gains by being a very different breed of cat. SDCI’s r-squared coefficient versus GSG is significantly less than that of its direct competitor, PDBC.

“Similar to the S&P GSCI index benchmark, the DBIQ Optimum Yield Diversified Commodity Index is very highly concentrated in oil, oil products and natural gas,” says SummerHaven’s Nelson. “The remaining nonenergy components are limited to just nine commodities with limited index weight. Livestock and other key commodities are not included in the DBIQ index. This concentration puts significant weight into traditional carbon-based energy, reducing portfolio diversification.” That has the potential to increase volatility over time.

SummerHaven’s commodity index, in contrast, draws from 27 liquid commodities each month, including six key energy markets and 21 additional commodities such as tin, platinum and lean hogs. “Equal weighting, combined with nearly twice as many eligible commodity markets, results in more degrees of freedom for index return contribution,” says Nelson. “For example, tin was the top-performing commodity in 2021, with an annual return of more than 120%, double the return of WTI crude oil.”

PDBC for its part, was less volatile than SDCI over the past year and generated a higher return, giving the Invesco portfolio a significant alpha advantage. Still, more of PDBC’s price action can be explained by GSG’s movements compared with SDCI.

“Much of our commodity allocation is similar to GSG,” Samulowitz explains, “though GSG is more diversified. The real difference is the roll methodology. During the pandemic, we were able to roll our positions further out on the curve intramonth in March 2020, which made a huge difference during the volatile summer of 2020. As we moved through 2020 and oil recovered, we maintained some deferred positions but also let a portion of our energy exposure naturally move to the forward part of the curve to capture the rebalancing oil market.”

Clearly, there’s more to an inflation hedge than ownership of a single asset, be that a commodity or real estate. All told, the foregoing shows us what’s common and what’s different among some of the year’s most active broad-based commodity futures portfolios.

The prowess of some of these products in reducing volatility and producing alpha brings to mind the words of Henry J. Heinz, one of America’s most famous entrepreneurs: “To do a common thing uncommonly well brings success.”