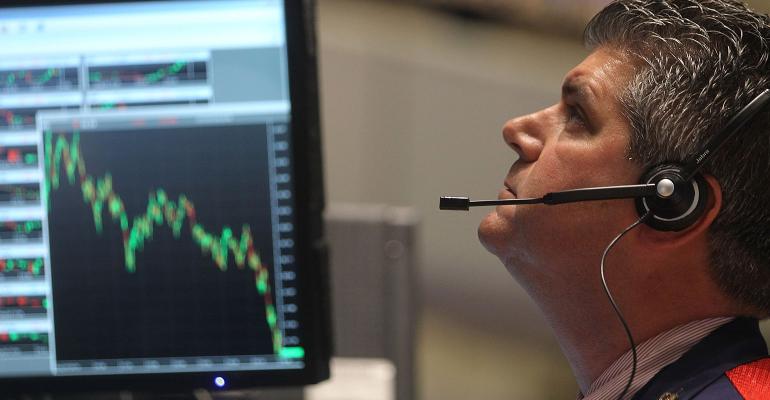 Chaos in Stocks Puts Live Managers Ahead of Robot Indexers

(Bloomberg) -- Beneath a placid surface that broke last week, chaos has been reigning all year in U.S. equities.

The evidence is in the winners and losers list, where a midyear rotation spurred by signs of an improving U.S. economy upended defensive industries and thrust banks and technology companies to the fore. By one reckoning -- the degree to which winners and losers have flipflopped from the first half to the second -- this has been the least orderly year since at least 1990.

The about-face belies the image of a market that before Friday had been lulled to sleep by exchange-traded index funds and is turning the tables for active managers, who are doing better as the choppiness affords greater opportunity for stock pickers. According to Bank of America Corp., the proportion of large-cap funds beating their benchmarks reached 58 percent in July and August, compared with 18 percent in first six months.

“When the goal is to follow the market, you start to create price-insensitive buyers and certain sectors get pushed to the extreme,” said Michael Ball, president and lead portfolio manager of Colorado-based Weatherstone Capital Management Inc., which oversees about $500 million. “Little or nothing is said for, ‘Are you buying shares at a good price?’ That can give an advantage to active investors.”

Two months of almost unbroken tranquility was pierced on Friday, when the S&P 500 Index tumbled 2.5 percent in its worst rout since the U.K. vote to leave the European Union. Even in the meltdown, investors continued to show aversion to the defensive industries that led the market in the first half, with utilities, phone companies and real-estate investment trusts bearing the worst of the losses.

The rotation since June has spread out gains among stocks, pushing a version of the S&P 500 that strips out market-value biases to its best performance versus the standard gauge since 2013. It’s a boon to those like Oakmark Select Fund and Boston Partners All-Cap Value Fund, and may help active managers salvage a year in which, prior to June, gains were concentrated among industries they wanted no part of -- high-dividend payers such as utility and phone companies.

Bargain hunting has paid off in individual stocks. A strategy of buying the 50 biggest losers in the S&P 500 during the first half would have returned an average 11 percent this quarter, a period when the S&P 500 is up 1.4 percent. Owning stocks that rose the most in the first half has lost 2.4 percent since June 30.

Technology and finance, the worst industries in the first half with losses exceeding 1 percent, have been transformed into leaders, jumping more than 4 percent since June 30. Utility and phone shares are down at least 7 percent this quarter, at the bottom of the pack after rallying about 20 percent in the previous six months.

The switch is occurring amid a growing valuation gap that made losers too cheap to pass up in a market where the S&P 500 is trading at its highest multiple in more than a decade. At their peak in July, utilities fetched 19 times forecast earnings, compared with a ratio of 18 for the broader benchmark. They were 13 percent more expensive than technology stocks.

At the very least, the ripples in 2016 are an exhibit in the debate about whether the ever-increasing influence of passive investing has turned the market into a monolith of lookalike stocks and industries. That taking a risk on the first half’s dogs is paying off suggests to some that skill still counts in investing, welcome news to anyone who thought active managers’ travails had left index funds as the only viable option.

“Even in the overvalued market that some people say we’re in now, there are still some pockets of opportunities,” said Shannon Saccocia, head of asset allocation and portfolio strategy at Boston Private Wealth, which oversees $7.7 billion. The firm recently bought energy shares and is considering adding positions to tech and health-care stocks. “As long as investors are willing to move away from the thirst for yield, that’s going to continue to be the tailwind for some of the cyclical sectors.”

It’s a statistical quirk that such a big shift in leadership should result in the S&P 500 being locked in the tightest trading range on record. The reversal has taken a toll on some of the most popular funds in passive investing.

The iShares Edge MSCI Min Vol USA ETF, which aims to offer muted price swings, took in more than $6 billion of fresh money as the destination of the most favored fund from January to June. Last month, it experienced the biggest withdrawal in three years as more than $400 million was pulled out.

For some active funds, it’s finally the time of revenge. The $5 billion Oakmark Select Fund, which invested about half its money in financial and technology stocks as of June 30, has returned 7 percent this quarter, five times the S&P 500’s gain. It lost 3 percent in the first half of the year. A similar bullish stance on cyclical shares has helped the Boston Partners All-Cap Value Fund beat its benchmark by 2.7 percentage points after trailing it.

Nothing has halted the seven-year trend of money flowing to passive funds. ETFs attracted $42 billion of fresh money in the last two months, compared with outflows of $50 billion from mutual funds, data compiled by Bloomberg and the Investment Company Institute.

One reason behind the steady shift from active to passive is the poor performance by stock pickers between January and June. Even with two months of favorable stock returns, money managers are still poised for their worst year since at least 2003, with only 15 percent of large-cap funds beating the market. That two-thirds of the U.S. fund industry remains actively managed means there’s room for passive investing to expand its share, according to Savita Subramanian, Bank of America’s equity & quantitative strategist.

“We have observed an accelerating trend of flows out of active funds and into passive vehicles. A poor performance record by active managers post-crisis has not helped,” Subramanian wrote in an Aug. 29 note to clients. “With a fee-sensitive investor base, we see more to go in the active to passive rotation.”

A seven-year rally that lifted almost every stock and the growth of ETFs have made passive investing appealing. But with the bull market becoming the second longest in history and uncertainty looming for presidential elections and Federal Reserve policy, it’s a mistake to assume the good days will continue, according to Jeff Powell, managing partner at Polaris Greystone Financial Group in San Rafael, California, where the firm oversees $1 billion.

“Imagine you’re driving 65, 70 miles per hour, then it starts to snow, are you going to drive the same way?” said Powell. “I know that’s a rhetorical question, but why would you sit there and manage your money in a way regardless of what’s going on around you.”