Blackrock is changing the underlying indexes of the increasingly popular municipal bond ETFs with potential exposure to higher quality bonds and a broader selection of issuers.

The fast-growing municipal bond ETF market is highly concentrated, with nine asset managers managing 98% of the assets. BlackRock is the industry leader with 43% share of the $77 billion tax-free ETF assets, according to CFRA Research , followed by Vanguard (17%), State Street Global Advisors (14%), and Van Eck (9%). Figure 1 lists the four other firms managing the remainder, though 19 managers in total offer a municipal bond product.

Demand for these ETFs has been climbing recently with the municipal bond category gathering $21 billion in the one-year period ended July 19. Investors are increasingly comfortable using fixed income ETFs and receive significant diversification benefits with them compared to owning individual bonds, and they typically cost less than a municipal bond mutual fund.

However, BlackRock announced in mid-July plans to change the underlying index for MUB to the ICE AMT-Free US National Municipal Index in mid-September. The $5.3 billion iShares Short-Term Muni Bond ETF (SUB) and two state-specific BlackRock municipal bond index ETFs, one focused on California and one on New York, will also soon have new ICE benchmarks.

The trend of shifting the benchmark behind an ETF continues in the second half of 2021. According to CFRA’s ETF database, between January 2016 and June 2021 there were 267 changes to the indexes that ETFs track, including 26 alone in the first six months of this year.

BlackRock has already completed a series of adjustments in 2021 including a suite of style ETFs tracking different Morningstar indexes and changing the providers for its popular biotechnology, semiconductor and transportation industry funds. Global X, Invesco and State Street Global Advisors are among the other asset managers that have made index changes in the recent past.

“As a fiduciary, we are constantly focused on evolving our product set with a goal of delivering better investment outcomes for our clients”, explained Carolyn Weinberg, Managing Director, Global Head of Product for iShares and Index Investments at BlackRock.

What is inside MUB and SUB is likely to change in September. The ICE benchmarks, which the iShares municipal bond ETFs are scheduled to track, are constructed differently than those by S&P. For example, the ICE AMT-Free US National Municipal Index had approximately 23,000 holdings at the end of June 2021, nearly double the approximately 13,000 that were part of the S&P National AMT-Free Municipal Bond Index.

While there is high overlap between the two investment-grade focused benchmarks, the ICE one also has a stronger credit profile with more exposure to highly liquid AAA-rated bonds (16.1% vs. 14.5%) and less exposure to less-accessible BBB-rated securities (6.3% vs. 7.3%) at the end of the second quarter of 2021 as shown in Figure 2.

Meanwhile, the less interest-rate sensitive SUB ETF will soon track the ICE Short-Maturity AMT-Free US National Municipal Bond Index which in June had exposure to seven times more securities than the currently utilized S&P Short-Term National AMT-Free Municipal Bond Index. Despite significant overlap, the new one also recently had a higher stake in AAA-rated bonds (20.4% vs. 15.9%) and lower one in BBB-rated securities (4.4% vs. 7.6%). 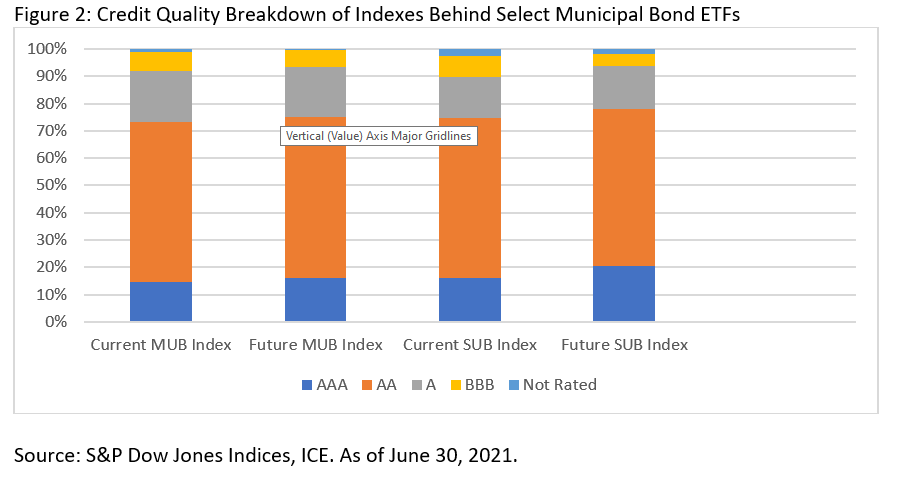 Weinberg added that the municipal market is highly fragmented and can be difficult to access efficiently, but a number of tailwinds are setting it up for growth and clients will benefit from the changes BlackRock is making to the funds. Accessing tens of thousands of individual securities instantaneously in a single trade enables clients to participate in this space with efficiency and scale. She added that this reflects how ETFs are modernizing fixed income markets, including municipals.

Fixed income ETFs often sample rather than fully replicate their underlying benchmarks. It is not clear to CFRA how big a change this would be for iShares ETF shareholders. MUB and SUB held approximately 5,000 and 2,000 securities, respectively, at the end of June, a fraction their tracking indexes with even more exposure to high-investment-grade bonds than the S&P benchmarks, as portfolio managers have some discretion. Yet, excluding the impact of their expense ratios, the pair of ETFs generated three-year annualized returns nearly identical to the indexes.