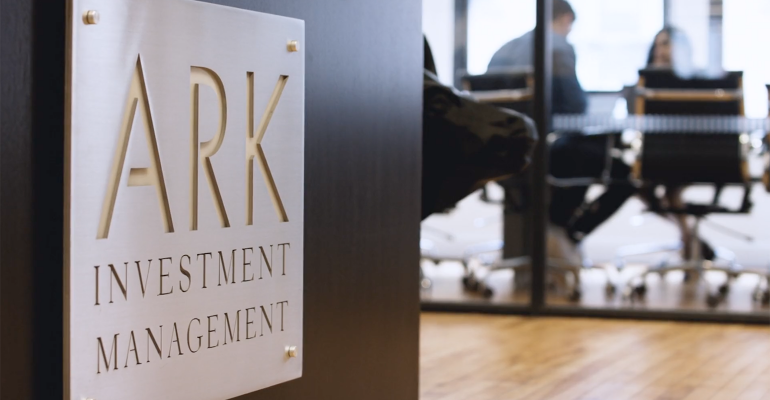 After a torrent of inflows in 2020, the once-niche firm now oversees about $41.5 billion in ETF products, compared with $39.7 billion for WisdomTree.

(Bloomberg) -- Cathie Wood’s Ark Investment Management is now among the top 10 issuers in the $5.5 trillion exchange-traded fund industry, taking the spot from WisdomTree.

After a torrent of inflows in 2020, the once-niche firm now oversees about $41.5 billion in ETF products, compared with $39.7 billion for WisdomTree, according to data compiled by Bloomberg. It’s the latest achievement in Ark’s wildly successful ascent amid a flood of demand for the innovative companies in its funds, such as Tesla Inc. This time last year, Ark had less than $3.5 billion in total assets.

The $21.4 billion flagship Ark Innovation ETF (ARKK), whose biggest holding is the electric-vehicle maker, saw another record week of cash infusions after luring nearly $10 billion last year. Tesla has been on a relentless surge, and its market valuation only lags behind a handful of behemoths on the S&P 500 Index, like Apple Inc. and Microsoft Corp. The skyrocketing popularity of Elon Musk’s company, which comprises about 11% of the actively managed fund, helped fuel ARKK’s almost 150% gain in 2020.

“In the first 25 years of the ETF industry, ETFs meant index products to most investors, and Ark has turned that on its head and highlighted that active management can exist and succeed,” said Todd Rosenbluth, director of ETF research for CFRA Research.

The ARK Innovation ETF had its best week since April as Tesla soared about 25%.

After a show-stopping year, some doubts have emerged as to how long Ark can sustain such a parabolic rise. It has only 0.8% of the ETF industry, compared to 37% for BlackRock Inc. and 28% for Vanguard Group. And a big firm such as JPMorgan could end up benefiting from its broader array of strategies relative to Ark, according to Rosenbluth.

“If the assumption is we’ll get an economic recovery as the Covid vaccine is deployed and things start getting back to normal, I would expect a rotation into value stocks, and the Ark strategies are clearly more growth-oriented,” said Nate Geraci, president of investment-advisory firm the ETF Store in Overland Park, Kansas. “Expecting the same type of performance we saw in 2020 moving forward is unrealistic.”