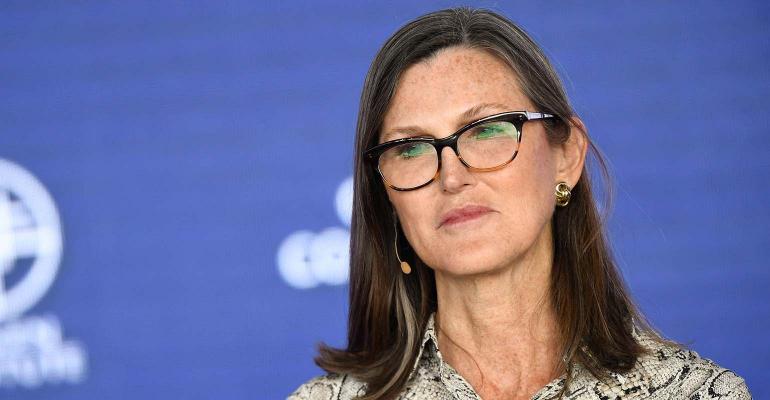 Cathie Wood and the Sound of a Changing Market

Investment firms, not just investors, have to listen hard to strike the right balance amid market volatility.

(Bloomberg Opinion) -- If investing is hard, managing an investment firm is harder. It requires balancing two sides of a ledger – investor capital on the one side and an investment portfolio on the other. Much of the time the two sides operate in harmony. Especially in the bull market of the past 10 years, a simple dynamic has driven the success of many investment firms: Money flows in, it’s invested in markets, markets go up, and more money comes in.

But the two sides occasionally get out of balance. That happens because firms’ revenue models skew towards the capital side of the ledger more than the investment side. They typically get paid according to total assets under management, which means they are incentivized to grow investor capital – regardless of the state of the market. So a dollar of net new money is worth more to the firm’s bottom line than a few basis points of incremental performance.

Problems occur when a market shift reduces investment opportunities after a period when investor capital has been scaled up. The current climate portends such a shift. Dan Loeb, who founded the hedge fund firm Third Point 27 years ago, told his clients in a May 6 letter that he’s worried: “I have said before that they don’t ring a bell when the rules of the game are changing, but if you listen closely, you can hear a dog whistle. This seems to be such a time to listen for that high-pitched sound.”

Over the years, many investment firms have come unstuck missing the signs and getting the balance wrong.

Julian Robertson is still known for his exceptional performance managing Tiger Fund through the 1980s and 1990s. Yet while he posted strong compound returns for his early investors, a lot of his assets, which peaked at $13 billion, came in just prior to a period of poor performance. One side of the ledger grew, but that did not influence how he managed the other side. On a “money-weighted” basis, returns were more modest.

Mercury Asset Management used to be the largest and most successful firm in the U.K. “The team included many exceptionally talented fund managers,” remembers Paul Marshall, a former employee who went on to found hedge fund firm Marshall Wace. “But they were too big for the market. Eventually (in 1998) the firm’s U.K. performance blew up completely.”

One firm in the crosshairs today is ARK Investment Management LLC, run by Cathie Wood. The firm was set up in 2014 and launched its flagship product, ARK Innovation ETF the same year. Clever content marketing fueled demand, and the fund, which focuses on the theme of disruptive innovation, raised around $16.8 billion in cumulative inflows. Most of those, though, came in the past two years,  just before the opportunity to profitably deploy them disappeared. Although the fund is up an average 14% a year since inception, the average dollar invested has lost around 33%, according to Morningstar Research.

That has echoes of the company once known as Janus Capital Management, which famously stumbled when the dot-com bubble burst in 2000. Firmwide assets peaked at $330 billion following a run of massive inflows – at one point, $1 billion a day. But when the market turned, the value of Janus funds declined by over 60%. By then, it had become apparent that it was structured to maximize asset growth rather than investment opportunities: Manager pay was based on fund size, there was no director of risk and executives later conceded that they had too few analysts covering too few stocks.

To protect against a mismatch between investor capital and investment opportunities, firms have two choices. They can turn off the marketing spigot and close the door to new flows, even though that may hurt revenue. Hedge funds regularly employ this strategy in an effort to balance capacity with opportunity.

Or they can target new investment opportunities. Passive funds, which have grabbed a growing share of fund inflows in the past decade, create new products by manufacturing new benchmarks. There are currently over 3 million indices in service around the world, with some segments showing very high growth. The number of indices measuring environmental, social and governance (ESG) criteria, for example, increased by 43% in 2021, creating a new pool of products to absorb investor capital.

In the alternatives market, Apollo Global Management has manufactured new credit assets as a destination for inflows. The firm manages $373 billion of capital where the mandate is to earn a yield and has built a stable of origination platforms to feed it. Apollo’s CEO, Marc Rowan, recognizes the problem:

“The ability to scale AUM and keep that promise of excess return involves growing the front-end asset origination as fast as you grow the back-end AUM growth. You get out of balance there, either your business is not performing optimally, you have got no capacity or you're taking in too much money, and ultimately, you're going to commoditize return. And while that will be good for a very short period of time, that is ultimately not a good thing for your business.”

Since Loeb’s dog whistle last sounded, many firms have restructured. Publicly traded private equity firms like Apollo are a lot more diversified than they once were and have many more places to allocate capital. But as market conditions shift, firms’ ability to manage the two sides of their business will come under increased pressure. It’s not just investors who are having a tough time navigating markets; investment-management firms are, too.

To contact the author of this story:
Marc Rubinstein at [email protected]