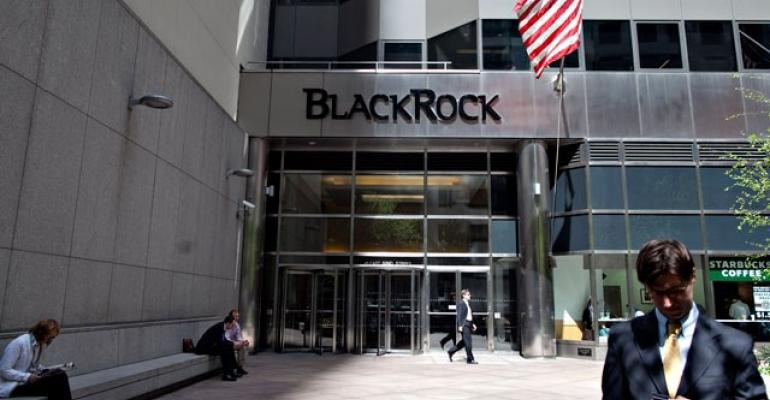 A rule change by the NAIC is expected to change the way bond ETFs are treated in insurance portfolios and reduce their capital requirements.

(Bloomberg) --BlackRock Inc. expects insurance companies could move more than $300 billion into debt exchange-traded funds over the next five years, thanks to a gate that’s been lifted in U.S. regulations.

The change follows a review by the National Association of Insurance Commissioners to tweak accounting guidelines. The New York-based asset manager worked with the group for four years to help modify the standards.

The new rules are expected to take effect by the start of next year. Asset managers expect this to change the way bond ETFs are treated in insurance portfolios and reduce their capital requirements, making it cheaper and easier for the firms to own them.

“Up until recently, the treatment of ETFs by the NAIC was harsh,” said Mike Siegel, who oversees $239 billion of insurer funds at Goldman Sachs Group Inc.

Bond ETFs have been treated the same as more volatile equity funds under the previous rules, which led to tighter capital requirements, Siegel said. Much of the industry also valued the ETFs at their acquisition price, also known as original cost. The NAIC is looking to measure them by fair value, which accounts for market fluctuations. ETF issuers must first get each security approved by the regulators for the newest accounting treatment to apply.

By using the “ systematic value” method that BlackRock helped create, insurers can choose to measure certain ETFs based on the underlying cash flows of the securities. So accountants and regulators could compare them to traditional bonds, which are staples of insurance portfolios.

BlackRock’s forecast would represent a 39 percent increase in the more than $750 billion market for bond ETFs. But it’s just a fraction of the nearly $5 trillion of total investments held by companies in the U.S. alone, said Josh Penzner, head of BlackRock’s iShares fixed-income and insurance sales. His firm manages more funds for insurers than any other, according to a report by research firm Insurance AUM.

Insurers are currently the fourth-largest holders of the debt funds, beating pensions and hedge funds, data compiled by Bloomberg show. Much of the shift into ETFs is due to shrinking bond inventories at large banks, Penzner said.

“We think that over time the bond market is going to evolve,” he said. “There aren’t as many people on the other end of the phone at the broker dealer, they don’t have as many bonds to sell.”

Deutsche Bank Group AG’s Mike Earley, whose firm oversees $190 billion worth of insurers’ funds, said he knows of one smaller insurance company that’s shifted its entire bond portfolio over to four or five ETFs, for exposure to Treasuries, corporate bonds and mortgage-backed securities and high yield debt. Deutsche Bank sees insurers as significant buyers of ETFs in the future, partially given the sheer scale scale of the industry.

“You could theoretically replace your entire portfolio,” Earley said. “But there are elements of risk.”

Of course, the new system isn’t perfect for ETF issuers. Insurance companies still have to get regulatory approval for each individual security before buying into the funds.

“Reporting entities must comply with the investment limitations of the states,” the NAIC said in a statement. The new guidance “does not overrule state statutes” or laws that may require all ETFs to be reported as equities.

Earley said state requirements could be a hurdle for a number of companies.

“You’ll have a harder time convincing your actuaries that a 30-year ETF is a perfect replacement for a 30-year bond,” because even though the cash flows may be similar, they may not always be the same, Earley said.

Bond ETFs are currently a very small part of the overall assets owned by the industry. Life insurers reported $2.9 billion worth of holdings at the end of 2016, according to a review by Fitch Ratings. But some are emerging as significant holders.

New York Life Insurance Co., for example, owns shares of the IQ Enhanced Core Plus Bond U.S. ETF, symbol AGGP, which is a mix of different credit holdings. Much of the holdings are invested for third parties, while a much smaller portion is held for the general account. The firm bought IndexIQ in 2015 to offer ETFs to retail and institutional investors. TIAA is the second-largest investor in the iShares TIPS Bond ETF, or TIP, which tracks Treasuries protected for inflation.

Still, the use of ETFs can erode an edge that insurance companies like to highlight. Big insurers tend to hold huge sums of money for many years before claims come due, giving them a chance to get higher yields on illiquid or complicated securities that might be shunned by retail investors.

Sometimes an ETF is just the right fit, however. If an insurer wants exposure to a certain type of debt, the firm may hold a fund until its money managers can get the actual bonds.

At MetLife Inc., the largest U.S. life insurer, “we use ETFs as temporary investments for quick entries and exits into the market, and we will continue to do so,” said John Calagna, a spokesman for the company.

In addition, foreign insurers and small-to-medium-sized U.S. firms may find the funds an easier and cheaper way to manage assets, Goldman’s Siegel said.

There still may be significant hurdles to the increased use of ETFs by insurers because they may be discouraged by regulatory barriers, or actuaries may have difficulties running the funds through their models when testing the strength of reserves, Earley said.

It’s still unclear to many companies how the rules may play out, said Mark Snyder, who helps manage $90 billion of insurer funds at JPMorgan Chase & Co. While it makes sense for insurers to use ETFs to manage cash opportunistically, many are more comfortable with traditional bonds so that the cash flows provide a good match for liabilities.

That’s something S&P Global Ratings said it will be looking to make sure of -- that ETFs are being acquired in so that they’re in line with the length of contracts tied to mortality, cars or hurricanes, whichever protection the insurer is selling.

Part of the reason BlackRock’s Penzner thinks his firm’s goal is reasonable is the sheer size of the insurance industry. Compared to $5 trillion, $300 billion isn’t much.

“A lot really depends on new continued engagement and acceleration, and conversations with the large insurers,” he said.