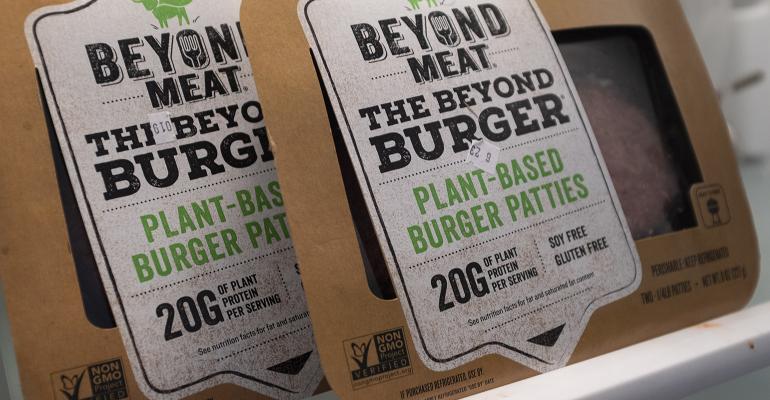 The $13.5 million AdvisorShares New Tech and Media ETF, known by its ticker FNG, bought 3,100 shares of Beyond Meat Inc.

(Bloomberg) -- An exchange-traded fund branded with the FANG theme doesn’t hold a single share of Facebook Inc. or Netflix Inc. But it just put about half a million dollars in one of this year’s hottest investments.

The $13.5 million AdvisorShares New Tech and Media ETF, known by its ticker FNG, bought 3,100 shares of Beyond Meat Inc., according to data compiled by Bloomberg. Since its debut three months ago, the vegan burger company has seen a meteoric rally, with a handful of analysts boosting their forecasts. While the stock tumbled on Thursday after a deeply discounted secondary offering, its rapid growth potential has kept investors’ attention.

FNG is one of a growing number of actively-managed ETFs that have the freedom to tune their exposure whenever they want. That flexibility is one of the main advantages of those funds compared with index-based ETFs that don’t have the power to make adjustments on any given day. Still, a faux-meat company seems a stretch to some.

“It’s unclear what a tech and media ETF is doing buying Beyond Meat,” said Bloomberg Intelligence analyst Eric Balchunas. “They probably see an opportunity to be the first big holder of a hot stock -- a move that shows at once the advantages and dangers of discretionary active management.”

The idea behind FNG was to seek stocks that have the same underlying characteristics of the FANG names around 2016 and 2017 such as growth, according to the ETF’s manager Scott Freeze. To that point, Beyond Meat ends up being one of the “premier companies” with those attributes, he said.

As for any type of investment, timing matters. And in the case of FNG, timing was indeed a big contributing factor to its underperformance in 2019. The ETF missed out on a portion of the rally in some of the hottest FANG names, slumping 16% this year. That compares with a surge of more than 20% for companies such as Facebook or Netflix.

Beyond Meat isn’t the only unexpected choice for the fund. Its two biggest holdings are: a $2.8 million AdvisorShares ETF and Dublin-based drugmaker Amarin Corp.

The fund is in the process of rebalancing its portfolio and should have it finalized within a week -- with a slightly larger number of securities at a lower weighting for each one, said Freeze.

To contact the reporter on this story:
Carolina Wilson in New York City at [email protected]