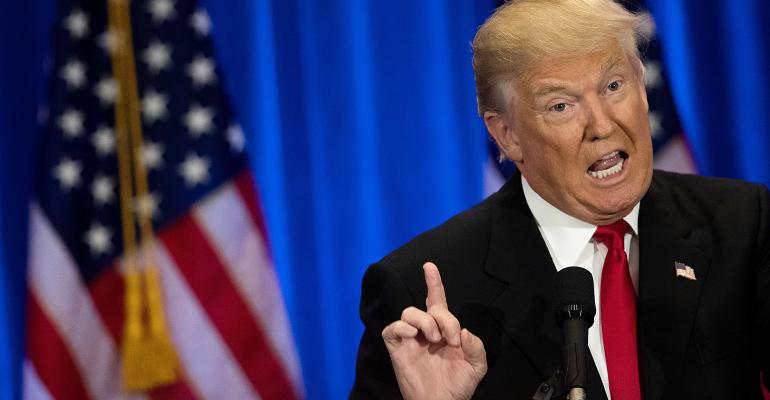 Betting On The U.S. Election Via The 'Trump ETF'

Mexico has been a prime target for Trump, who has accused the country of taking away jobs from Americans, focusing particular ire on a landmark 1990s trade agreement with the United States' southern neighbor and Canada. He has said he will renegotiate the North American Free Trade Agreement, commonly known as NAFTA, or pull out of it, and build a wall along the U.S.-Mexico border to curb illegal immigration.

Although a range of factors influence all markets, investors said this week that the U.S.-listed iShares MSCI Mexico Capped ETF (EWW) is increasingly being driven by the prospect of the New York businessman's election.

It has been a good year for equity investors in emerging markets in general after three years of negative returns. But the $1 billion ETF has underperformed and is now in negative territory for the year as the peso has fallen and Trump's chances of winning the Nov. 8 election have gone up - though predictive models such as FiveThirtyEight and betting markets still forecast a Clinton victory.

Short interest in the ETF - essentially bets that it will fall in price - have risen 59 percent since last month as Trump gained steam, according to financial analytics firm S3 Partners LLC.

Trump's worst relative showing in the past few months was Aug. 9, when a closely watched opinion polling average showed him nearly 8 percentage points behind Democratic rival Hillary Clinton. Her lead has tightened to about 3 points, according to the RealClearPolitics average, although it is off lows of less than 1 point earlier this month. The latest Reuters/Ipsos poll released on Friday gave Clinton a 5-point lead over Trump, with 43 percent of likely voters.

"Shorting the EWW ETF may be a vehicle to bet on Mr. Trump's success in being elected the next president of the U.S. and his willingness to address the long-standing Mexican trade imbalance," Ihor Dusaniwsky, S3 Partners' head of research, said in an email interview. "In other words, as Trump's popularity rises, the chances of a negative impact on the Mexican economy rises."

The ETF saw a mild rebound this week after Clinton was seen by most as besting Trump in their first presidential debate on Monday.

Much of the negative performance has been driven by the decline of the peso since last month, which hurt returns for U.S. dollar investors even when Mexican stocks hold their value.

"There's no reason for the peso to go from 18.20 to 19.50 (per dollar) unless it's because Trump has gone from being behind to being dead even with Hillary," David Garff, president of Accuvest Global Advisors, which sold its last share of the fund in May, said in a phone interview.

Mexico's central bank chief Agustin Carstens said on Friday that "it was a reality" that there was a correlation between his country's weakening currency and the Trump campaign.

"I can't deny there's a knee-jerk reaction by the peso when it was perceived (Trump) did badly in the debate," said Win Thin, global head of emerging market currency strategy at financial services firm Brown Brothers Harriman in New York, "but the peso's been weakening for several years even before Trump became the nominee."

"The media has been playing this up a bit, but Mexico's already suffering from low oil prices, sluggish growth," he said. "The peso is often used as a proxy for the wider emerging markets, so there's all these other factors that to me are more important to determining the peso exchange rather than Trump."

Even if the peso's decline has already come to an end, Accuvest's Garff said Mexican stocks held by the ETF could still be in for pain under a Trump presidency.

Central bank chief Carstens, speaking on local radio, said a Trump victory would hit his country like a hurricane, adding that the scenario for Mexico was better with a Clinton win.

"If Trump does try to blow up NAFTA, it will hurt Mexico. No question," said Garff, the investor. "It is a double whammy."