/sites/all/themes/penton_subtheme_wealthmanagement/images/logos/footer.png
Recent
Recent
What’s Behind the Appeal of Portfolio Hedging Using Inverse ETFs
May 29, 2020
Ameriprise Touts Merits of Virtual Recruiting
May 28, 2020
Stifel Settles With FINRA For More Than $3 Million Over UITs
May 28, 2020
LPL Lures Washington-Based Team from Wells Fargo FiNet
May 28, 2020
A Can’t-Miss COI Campaign
May 28, 2020
Featured
Poll: 15 Classic Books on Investing and the Markets
Apr 03, 2020
FICO Updates and Their Impact on Credit Scores
May 06, 2020
Franklin Templeton Fires Portfolio Manager Amy Cooper Involved in Central Park Dog Incident
May 26, 2020
The Top Colleges for Financial Planning
Oct 03, 2019
The Market's Measure
brought to you by

The Best of the Best—Stylewise—of 2019

Should auld acquaintance be forgot? Certainly not for ETFs. After all, some are on a roll. Namely, domestic large-cap blend ETFs. Last year was a good one for most of the 160 portfolios in this category.

The category’s best performer seems to be the VanEck Vectors Morningstar Wide Moat ETF (Cboe BZX: MOAT), a fund that’s cranked out a gain of better than 33 percent on the year, bettering the return of the iShares Core S&P 500 ETF (NYSE Arca: IVV) by more than five percentage points.

Nominally, the MOAT portfolio holds 40 names. Why nominally? Because of the portfolio’s rebalancing methodology. Half of the portfolio is reconstituted with equal weights at six month-intervals. The remaining half is rebalanced three months later. Constraints on turnover and sector exposure then kick in which can cause the ETF to hold more than 40 stocks at any given time. Presently, for example, the MOAT portfolio owns 48 issues ranging from Biogen Inc. (Nasdaq: BIIB) to McDonald’s Corp. (NYSE: MCD).

MOAT’s given its investors market-beating returns in 2019 at the cost of volatility. MOAT’s standard deviation is a fifth higher than IVV’s. That does no favors for MOAT’s alpha coefficient. With a beta of 1.18, the VanEck portfolio chalks up a -0.60 alpha reading for the year.

Okay, you say, is that ratio exceptional? In a word, yes. A ratio between 0.4 and 0.6 typifies a good investment. Any value above 0.61 is considered a great investment.

Fine, but is 2019 a fluke? Is there constancy to MOAT’s outperformance? Turns out, there is. Just take a gander at the five-year chart below. On a cumulative return basis, MOAT caught up with and surpassed IVV in 2016 and hasn’t looked back since. 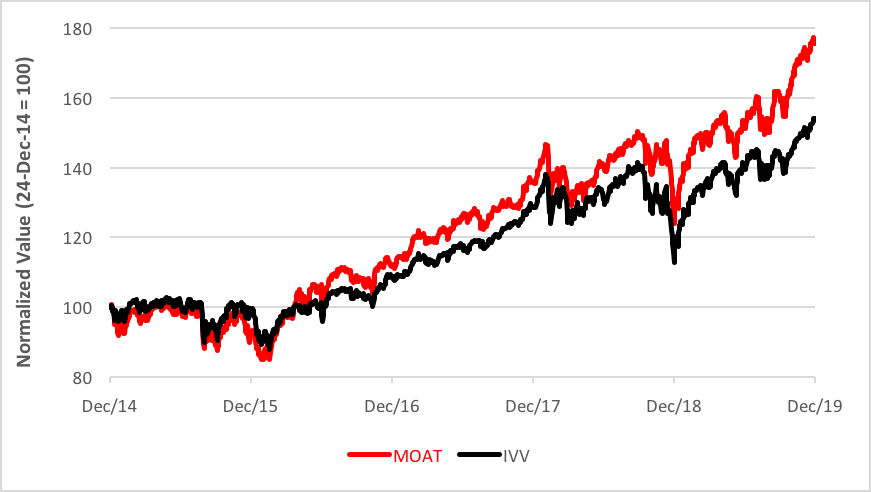 Judging the numbers above, things seem to have just gotten better for MOAT as time passed. But what of the future? Well, technically, there still seems to be room on the upside for the VanEck fund. A near-term target 7% above today’s price looms. At that point, it will be time to reassess the risk of holding MOAT as a core position.