Managed futures may be a more stable portfolio diversifier.

Since our last survey, gold has moved atop the monthly alternative investments (“alts”) leader board, outperforming the S&P 500 Index by nearly than 200 basis points. Gold’s year-to-date performance has been even more impressive. Blue-chip equities are barely positive for the year, while bullion’s up almost 28%.

GLD is part of a trio of funds that have found favor with investors this summer. As in our last survey, GLD again shares the medal stand with the SPDR Bloomberg Barclays Convertible Securities ETF (NYSE Arca: CWB), a portfolio of convertible bonds and preferred stocks, and the Invesco Optimum Yield Diversified Commodity Strategy No K-1 ETF (Nasdaq: PDBC), an actively managed futures fund optimized to dampen negative roll yields. 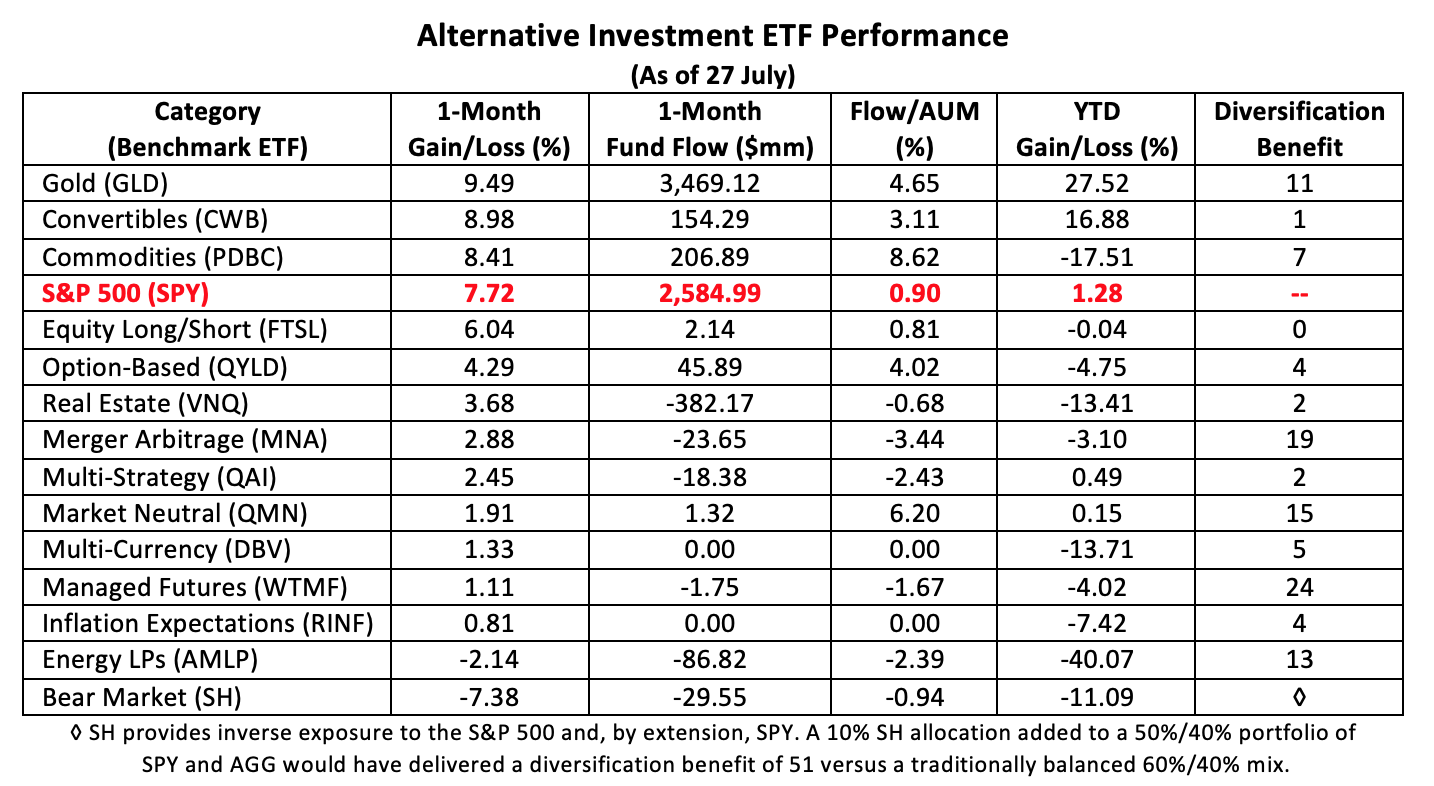 We’ve been queried more than once why PDBC isn’t the archetype for the managed futures category, benchmarked now by the Wisdom Tree Managed Futures Strategy (NYSE Arca: WTMF). After all, say doubters, PDBC is actively managed.

The Invesco fund is indeed managed on a discretionary basis, but that’s really a distinction without much of a difference. PDBC’s portfolio was, for a time, nearly identical to that of its sibling, the Invesco DB Commodity Index Tracking Fund (NYSE Arca: DBC). The self-avowed aim of PDBC’s managers is to outdo DBC’s underlying index, though the fund’s performance over the past five years has been quite similar to DBC’s. Over time, differences in the funds’ individual commodity allocations have grown. Still, the mean variance at the top tier remains zero. Notably, PDBC is now overweight in gold, sugar and soybeans compared with its sister fund, while underweight in energy contracts. These divergences no doubt account for the spread in the funds’ performance, though half of that disparity can be attributed to the difference in their expense ratios. 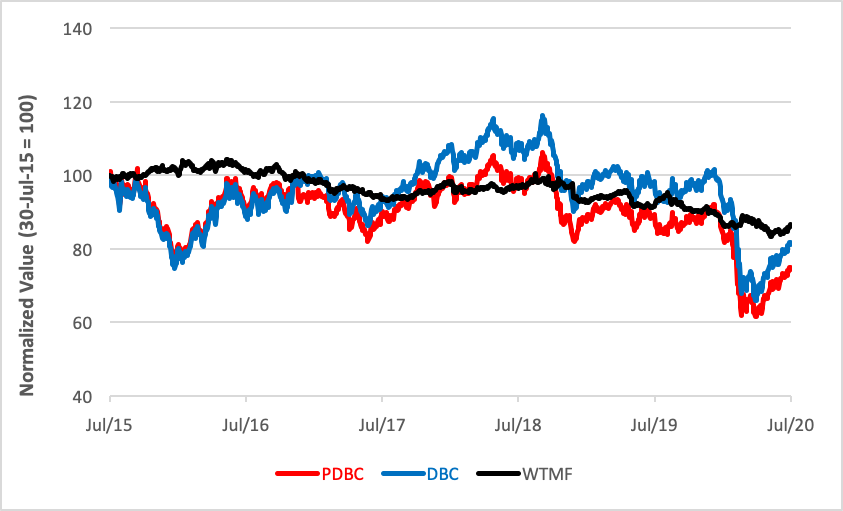 Both PDBC and DBC maintain long-only exposure to the same 14 commodities spread out over the energy, precious metals, industrial metals and agricultural sectors, but there are critical structural differences between the two ETFs. DBC is organized as a commodity pool, subjecting its holders to mark-to-market tax treatment and the accounting burden of a K-1 return. PDBC is structured as a ’40 Act fund which issues a 1099 statement at year’s end. It’s no wonder why PDBC’s asset base has swelled to more than double that of DBC. That, and PDBC’s lower expense ratio, to be sure.

The Wisdom Tree WTMF portfolio actually started out as an index tracker based on the Diversified Trends Indicator (DTI), a gauge of rising and declining price trends in commodity, currency and U.S. Treasury futures. Though the fund no longer slavishly follows DTI, it still hews to the indicator’s basic design: selecting long and short positions from a volatility-controlled universe of 24 near-month futures contracts based on their momentum.

And therein lies the answer to our agnostics: WTMF is the exemplar of the managed futures category because it embraces the very essence of the strategy: PDBC and DBC are long-only portfolios; WTMF is free to utilize short positions to capture returns from falling markets, with one notable exception. No short positions in energy futures are countenanced in the WTMF methodology. If momentum is negative, the worst exposure for the energy sector is “flat,” not “short.”

Presently, WTMF is flat with respect to energy, long precious metals and Treasurys, short agriculturals and short currencies with the exception of the Japanese yen and the Swiss franc.

You can readily see how access to short momentum has given WTMF a return advantage over the long-only commodities portfolios. In large part, WTMF’s edge can be attributed to the dampened volatility engendered by its long/flat/short methodology.

As we move forward in the COVID-19 economy, as inflationary pressures mount and as safe havens are more aggressively sought, WTMF’s approach may prove even more useful to portfolio runners as a diversifier.

The future of diverse portfolios may, indeed, be futures.