Alpha in the Low-Vol Space

A young ETF shows its stripes.

I’m on a constant prowl for alpha in the ETF universe. It’s elusive. And often ethereal. So imagine my surprise when my peregrinations led me to an actively managed alpha producer in, of all places, the low-volatility space.

The result? Year to date, FLLV has bested the index-tracking iShares Russell 1000 ETF (NYSE Arca: IWB) by 1.29 points. No small feat for a low-vol portfolio. But is it ethereal? Is there any sustainability to this outperformance?

Let’s back up a moment. Launched in September 2016, FLLV has been flying under investors’ radar. It’s amassed only $13.8 million in assets, but has seen a 25% increase in its average daily trading volume since the top of the year.

The clues to FLLV’s volume spike can be found in the table above. The stats look pretty good, right? And they seem to be persistent. Even if we pull back to one-year or two-year time frames, alpha—though attenuated—endures.

The fund’s day-to-day performance, though, doesn’t look so pretty. From inception, the Franklin portfolio mostly underperformed the iShares index tracker on a cumulative basis. More than a little of that is probably due to FLLV’s expense ratio, which, at a subsidized 50 basis points, is three times that of IWB. 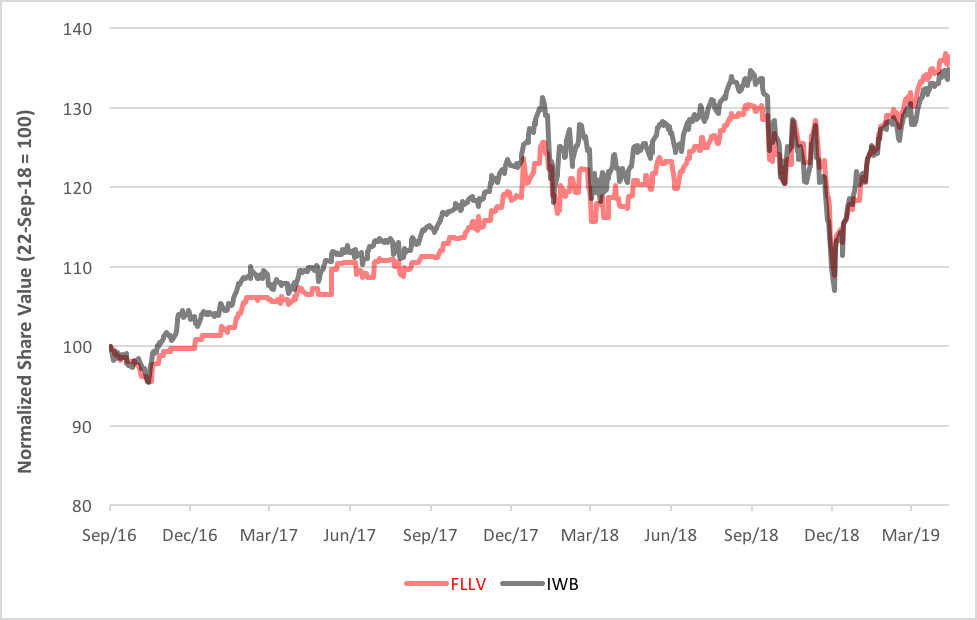 So, what do we know now? Soon, the FLLV portfolio will cross the three-year threshold that entitles it to be considered “seasoned” by the likes of Morningstar and Lipper. The tabular stats will likely look very attractive and catch the attention of investors and advisors alike. Sure, there’s the liquidity question, but the depth of the markets in FLLV’s constituents makes relatively easy work of large orders.

Will FLLV’s outperformance persist? Maybe. Chartwise, there’s room for another 22 percent gain in FLLV’s future. Is that enough to outdo the Russell 1000 proxy? With volatility a more persistent feature nowadays, it just might be.