Alpha in the Alternative ETF Space

Who knew that merger arbitrage would top the list of alternative investment (“alt”) ETFs in September? By topping, we mean on a risk-adjusted basis. For the 19 trading days ending Sept.. 25, the IQ Merger Arbitrage ETF (NYSE Arca: MNA) racked up a 2.50 alpha coefficient versus the S&P 500.

MNA's alpha was earned on 1.57% appreciation in the ETF’s share price but that wasn’t the best price gain of the month. That distinction belongs to the ProShares Short S&P 500 (NYSE Arca: SH) which rose 6.31% on the heels of a broad slump in stock prices following an early-month peak. Despite the gain, SH squeezed out a negative alpha reading in September, owing largely to the ETF’s high volatility.

So why would a merger arbitrage portfolio fare well in such a market? Precisely because it IS such a market. The MNA portfolio tracks a long/short index, with long exposure to companies that are takeover or acquisition targets and short takes on broad equity benchmarks. While the performance of the long stock positions in the MNA portfolio—led by shares of Vivint Solar Inc. and GrubHub Inc.—were a mixed bag this month, short positions in swaps and ETFs based on the FTSE Europe Index, the PHLX Semiconductor Index, among others, were big winners.

Because the size of the short exposures is significantly smaller than that of the long equity side, the portfolio ends up with a modest net long posture. Against the S&P 500, the fund earned a 0.15 beta factor and a 61.37 correlation coefficient in September. 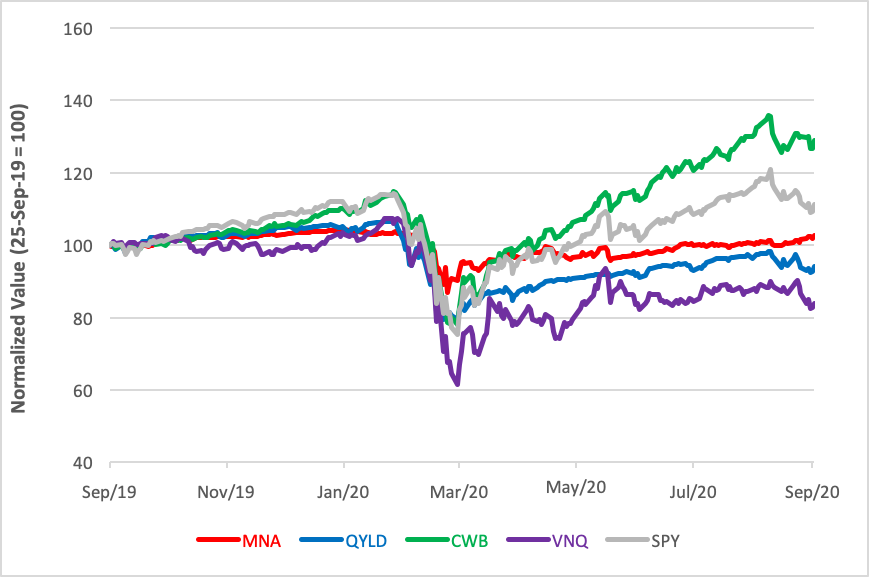 The Global X NASDAQ 100 Covered Call ETF (Nasdaq: QYLD) managed a 0.79 alpha coefficient against a 4.05% loss for the period. QYLD follows a “buy-write” strategy in which the fund buys the stocks in the Nasdaq 100 and, each month, sells at-the-money call options on the index. Buy-writes are neutral-to-slightly-bullish plays—analogous to selling index puts—that allow writers to retain option premia if the index fails to rise above the strike price by the contracts’ expiration date. Losses sustained from downward pressure on the index in September, however, swamped this month’s option receipts.

Long-time chart topper, the SPDR Bloomberg Barclays Convertible Securities ETF (NYSE Arca: CWB), earned a 0.27 alpha reading this month as its share price slipped 5.09%. CWB commits 75% of its portfolio’s heft to convertible bonds with the majority of the balance given over to preferred shares. CWB tracks a market value–weighted index of U.S. dollar-denominated converts with an outstanding par amount of at least $250 million. Convertibles, linked as they are to equities, exhibit stock-like volatility. Over the past year, CWB posted an 87.83 daily correlation coefficient to the S&P 500.

With its 0.19 alpha, the Vanguard Real Estate ETF (NYSE Arca: VNQ) posted a 5.02% loss for the month, owing largely to its ongoing exposure to commercial REITs. VNQ tracks a broad cap-weighted index that captures much of the US real estate market. VNQ’s 77.29 beta coefficient figured prominently in its September alpha calculation. 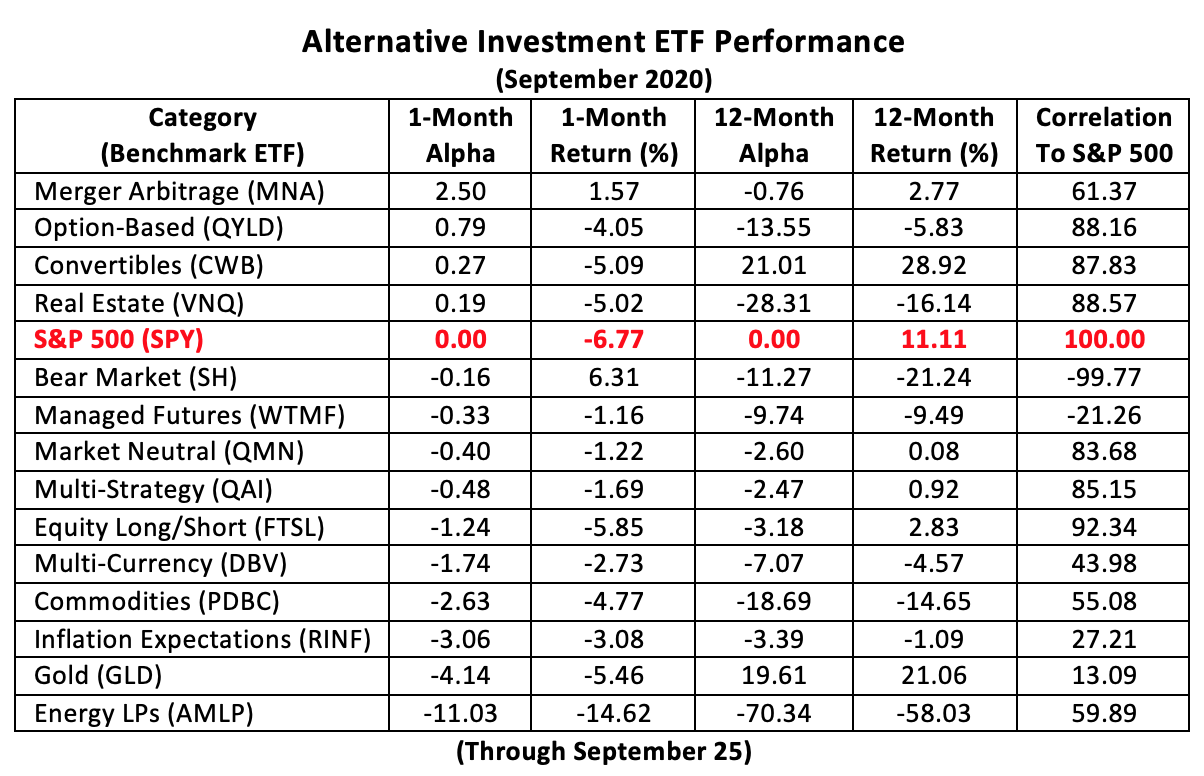 While four ETFs scored positive alpha in September, only two exposures are in the black for the past year: convertibles and gold. The CWB portfolio outperformed the SPDR Gold Shares Trust (NYSE Arca: GLD) for the 12-month period ending Sept. 25 on two metrics. CWB bettered GLD’s alpha coefficient by140 basis points and also surpassed the gold portfolio’s return by nearly 8 percentage points.

For portfolio builders, the longer-term alpha metric is most important. Why? Because, fundamentally, there are three ways to create alpha--read: risk-adjusted outperformance over the benchmark--for one’s overall portfolio, one of which is security selection. Choosing an ETF that already beats the benchmark gives a portfolio a leg up on the benchmark. Timing one’s ETF purchases and sales is another route to alpha as is the employment of leverage.

The simplest and perhaps the safest pathway is the choice of alpha-producing ETFs. Over the past 12 months, that course has led investors to CWB and GLD.