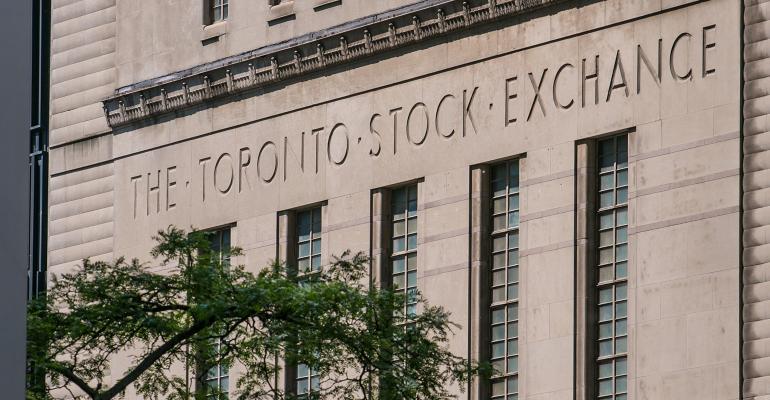 The $6 Trillion ETF Revolution Began 30 Years Ago in Toronto

Thirty years ago on March 9, a small group of bankers and stock exchange employees listed the world’s first exchange-traded fund in Canada’s financial capital -- three years before America’s first and more famous equivalent made its debut.

(Bloomberg) -- The investing revolution that has swept up more than $6 trillion in assets and upended markets the world over first sparked to life not on Wall Street, but a stock exchange to the north.

Thirty years ago on March 9, a small group of bankers and stock exchange employees listed the world’s first exchange-traded fund in Canada’s financial capital -- three years before America’s first and more famous equivalent made its debut.

The Toronto 35 Index Participation fund, or TIPs, tracked a basket of some of Canada’s 35 largest companies. In the three decades since, investors have stampeded into ETFs offering a slice of everything from the Slovenian stock market to marijuana to gold -- at a fraction of the cost of mutual funds.

That the first ever ETF was listed in Canada was down to two main factors -- a nimble regulatory regime and a dominant stock exchange.

“The idea was hatched in the U.S and launched in Canada,” said Eric Balchunas, analyst at Bloomberg Intelligence and author of ‘The Institutional ETF Toolbox.’ Canada was “lucky to have very liberal regulators,” he added.

The push for an ETF had its origins in the aftermath of Black Monday, the October 1987 crash that wiped almost 23% from the Dow Jones Industrial Average -- still the biggest one-day percentage loss on record. U.S. regulators were looking for ways to reduce volatility between futures and individual stocks which had increased the panic and exacerbated the sell-off.

They hit upon the idea that a single basket of stocks might have provided a buffer between the two markets. Enter Index Participation Shares (IPS), created by the American Stock Exchange before TIPs. U.S. regulators ruled however, that IPS where so much like futures they had to be traded on a futures exchange. A bureaucratic morass ensued.

On Bay Street, Toronto’s financial district, the Canadians were also looking for a proxy to trade Toronto Stock Exchange 300 Composite Index but it became too unwieldy to trade all the underlying securities.

Doug Steiner, who ran equity derivatives at Dominion Securities, now a unit of Royal Bank of Canada, and his colleague Cheryl Leonhardt, a mathematician, zeroed in on something smaller. They came up with a “a very simple” 35-security index that had about a 0.95 correlation with the Toronto Stock Exchange 300 Index, said Steiner.

“Then we pitched the index, as well as futures and put and call options, that could be traded against the portfolio,” he said. TIPs was the logical next step. The boost to liquidity of all these instruments brought the brokers on board.

“I met with the American Stock Exchange at the time and their roadblocks were just trying to get all the parties together,” said Stephen Rider, who was director of index and statistical services at the Toronto Stock Exchange. “Canada being a smaller playing field, everybody played nicely and we got everybody together. The TSE sponsored it and did all the prospectus work.”

For one fresh college graduate, it was an experience of a lifetime. Peter Haynes joined the bourse operator as an index analyst where he calculated and maintained indexes, including the Toronto 35 Index, the benchmark for TIPs.

“TIPs felt to everyone like a stock because you bought it on the Toronto Stock Exchange,” said Haynes, who is now 51 and managing director of index products at Toronto-Dominion Bank. “It paid you a dividend which was the dividends of all the individual securities paid out each quarter.”

“The Ontario Securities Commission showed great foresight in granting the exemptions/waivers needed to get the TIPs prospectus cleared and the units listed,” said Andrew Clademenos, who was responsible for new products at the exchange. He ended up putting in the order for the world’s first ETF trade.

In 2016, Steiner was inducted into Canada’s Investment Industry Hall of Fame. TIPs, now known as the iShares S&P/TSX 60 index ETF and owned by BlackRock Inc., had a market value of about C$8.5 billion ($6.27 billion) on Friday. It’s now the most actively trade and most liquid ETF in Canada. And IPS? They became the SPDR S&P 500 ETF, otherwise known as Spiders. On Friday, it had about $262 billion in assets, the largest ETF in the world.

To contact the reporter on this story:
Divya Balji in Toronto at [email protected]