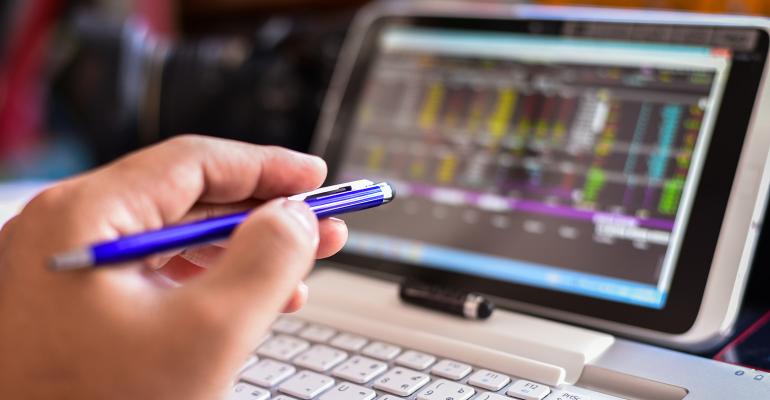 The rebalancing of MTUM's quant strategy will push the weighting of financial stocks to a third from less than 2% currently. The technology sector will slide to 17% from 40%.

(Bloomberg) -- A $16 billion exchange-traded fund is set for a monster makeover this week in favor of value shares over tech as it chases the hottest trends on Wall Street.

BlackRock Inc.’s iShares MSCI USA Momentum Factor ETF (ticker MTUM) will see “an astounding” 68% of its portfolio holdings change in order to hold the market’s top performers over the past year, according to Wells Fargo estimates.

The rebalancing of the quant strategy, due on or around Thursday, will push the weighting of financial stocks to a third from less than 2% currently, the strategists reckon. The technology sector will slide to 17% from 40%.

It all underscores the intensity of the risk-on stock rotation, away from pandemic-induced economic misery to vaccine- and stimulus-fueled optimism. The rolling one-year performance of the value factor -- which bets on cheap-looking shares and against expensive peers -- is near its strongest since the global financial crisis.

“We expect MTUM to morph from an expensive, high-growth play to a higher-mo’ basket with benchmark-like growth/value characteristics,” Wells Fargo analysts led by Christopher Harvey wrote in a note. “The fund’s Quality drops somewhat.”

MTUM is part of a breed of ETFs known as smart-beta funds, a $1.4 trillion industry whose philosophy is mostly to pick stocks by some quantifiable characteristic.

The ETF ranks stocks by their returns over a six month- and one-year horizon, and rebalances semiannually -- less frequent than most factor quants. That means it’s clung onto underpeforming tech megacaps longer than peers.

With the likes of Netflix Inc. and Apple Inc. faltering this year, the ETF is on course to lag the broader American market for a third straight quarter -- its worst run since its 2013 inception.

By contrast, value stocks have been consistently dominating the equity leaderboard since November. The reconstitution this week could therefore help MTUM regain its mojo -- provided the strategy remains in the ascendancy.

“More nimble quant factors (and investors) likely already have adapted ahead of the Index’s rebalance,” the Wells Fargo analysts wrote. “We suspect this rebalance could be the last major, coordinated liquidity demand for former high-fliers.”

Our earlier story: Momentum Quants Will Unleash the ‘Most Turbulent Rebalance Ever’

It’s not the only product reshuffling this week, though the changes will be less drastic elsewhere.

Both funds have also underperformed U.S. benchmarks this year as investors cast off defensive names to ride the economic upswing. That’s unlikely to change soon, according to Wells Fargo.

“Quality tends to outperform in a risk-off, widening-credit spread environment,” Harvey and the team wrote. “This often occurs late in the economic cycle when monetary policy is less accommodative. Though credit spreads are tight and the style has underperformed, our indicators suggest we are still in mid-cycle -- likely too early for an inflection point.”