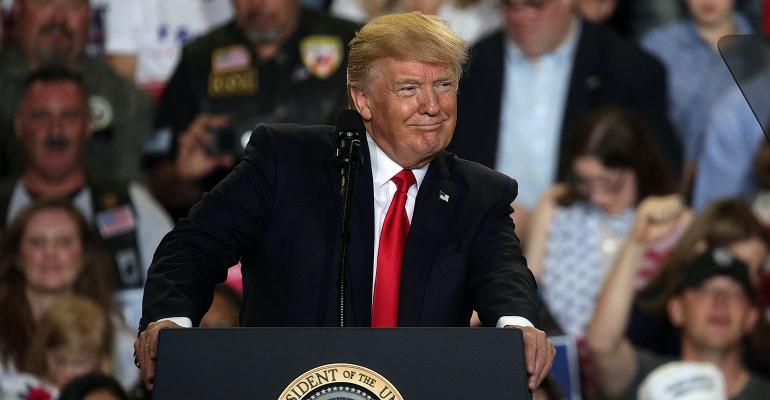 Expectations set, but who’s going to take it to the next level?

It’s been described as a smackdown.

Moments after the Speaker of the House announced that the House of Representatives wouldn’t be voting to repeal (and replace) President Obama’s Affordable Care Act (ACA), the White House took control of tax reform.

Keep in mind, this failure wasn’t just another muscular show of might by the right flank in the House, known as the “Freedom Caucus.” No, this was epic.

Since the ink has been dry on ACA in 2010, a big swath of Republicans have been running and winning on repealing it. With Republicans in control of Congress and the White House, this was their moment. Surely if anything could get done, it was this.

When it was over, the White House made clear that the success of its next legislative effort and its biggest priority — tax reform — wasn’t going to be left in those same hands. No way. And that’s when the takeover happened. Last Wednesday is when it formally began.

President Trump’s team delivered a short, bulleted outline of Trump-style tax reform principles. Congressional leadership fell in right behind, issuing a joint statement describing those principles as “...critical guideposts for Congress and the Administration as we work together to overhaul the American tax system...”

So here’s the good news for those who want tax reform: history proves that enacting major policy reform requires the President to suit up and get on the field, like back in 1986 with Reagan and tax reform. Pacing the sidelines and barking plays doesn’t work. The failure to repeal/replace ACA 1.0 is a fresh example. (By the way, I do think there will be a 2.0 and maybe a 3.0 down the road that will pass).

By taking the reins early on and being specific, Trump has already, arguably, increased the chances for tax reform. He and his top brass have made it clear to Congress and to the voters what their expectations are. So if your clients want tax reform, this is a very good start.

But tax reform doesn’t win or lose on just high-minded principles, it’s about the details. And when crafting legislation, details are often left to the lieutenants — congressional staff and senior Treasury and White House aides.

The bad (and maybe the ugly) in all of this is that the administration is still mostly top brass. The rest of the chairs are fairly empty, particularly at the Treasury Department. (To be fair, the White House’s National Economic Council does have a robust team working on tax reform.)

Yet historically, the Treasury’s team is the substantive lead on taxes for the President. As of today, there’s no one in that role at the Treasury Department under Secretary Mnuchin to translate Trump’s principles into actionable policy options and details for Congress to consider. And don’t most people believe Mnuchin should be busy with other things?

To be clear, this isn’t a judgment on anyone’s competency. There’s literally no one to judge. No one has been nominated yet to be Assistant Secretary for Tax Policy at the Treasury Department.

This is a little like telling your teenagers to take care of the dog while you’re out of town, but not detailing that they should walk the dog often. What we all know is that enacting durable tax reform isn’t just about principles or guidance, it’s about the details. No personnel, no details, no tax reform.

So, what now? Republicans on the House’s tax-writing committee are meeting over the weekend for a long-planned retreat on tax reform to continue hashing out members’ priorities (and now probably how to accommodate the President’s tax reform principles).

Here’s what we know: The House is working on updating its 2016 version of tax reform and is planning public hearings to address some of those changes.

First up is likely a hearing on a new version of their border adjustable tax, which came under plenty of fire when it was first proposed. Another hearing could focus on itemized deductions. Depending on how the House plans to fix the problem created in their 2016 version of tax reform — that is, tens of millions of taxpayers would qualify for a new, higher standard deduction, which would leave those tens of millions of taxpayers without a charitable giving incentive — I would expect a hearing on that new charitable giving incentive.

One thing is for sure, the tax reform runway is lengthening. Chairman Kevin Brady (R-TX) is now saying that his committee may not even begin formally discussing and amending tax reform legislation — this is called a “markup” — until September. That makes a 2017 signing ceremony beside the White House Christmas tree possible, but not without reasonable doubt.

Finally, what about the Trump voters? Are they growing impatient and souring on the rosy economic picture candidate Trump painted if elected? No way. A new poll at his 100-day mark shows that 93 percent of Trump voters approve of the job he’s doing. That’s a big number and a lot of wind at his back. Among all Americans? Pew Research released a recent poll showing that for the first time since the recession, more Americans are positive about the economy than negative (58 percent to 40 percent). Another good thing for an administration (and Congress) with lots of plans but few accomplishments.

Stay tuned for the rollercoaster ride ahead.