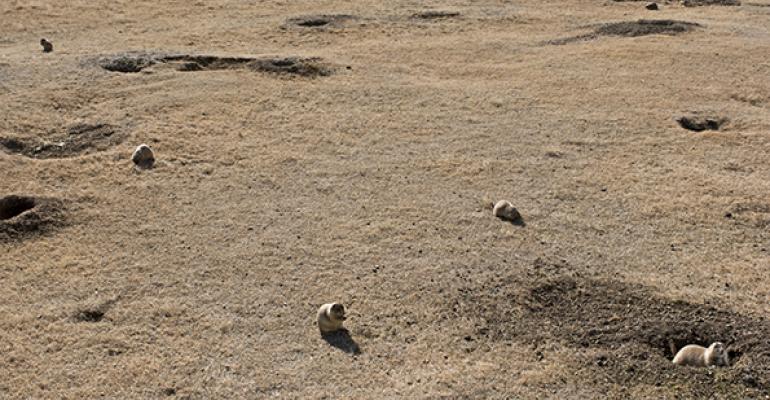 The rising generation finds its voice

One of my favorite walks is a mere five-minute drive from home.  It's the two-mile path around Johnson Reservoir.  To the west, beyond homes and low-lying commercial development, you can see the Front Range of the Rocky Mountains.  Past the Front Range, several snow-capped peaks serve as beacons.

About halfway around the lake is a “prairie dog town” that covers dozens of acres.  Hundreds of volcano-like mounds mark the entryways to burrows.  Throughout the spring and summer, a thousand or so prairie dogs forage the short grass.  As winter approaches, you won’t see as many.

As I set out for my 8 a.m. walk on a recent mid-October morning, scattered fishermen have already settled into their lawn chairs.  I nod to passing joggers and dog-walkers.

Reaching the prairie dog town, I stop to observe.  Not much action today. Mostly, it's chubby yellowish-brown adolescents who are out foraging. (In the fall, prairie dogs need to put on a layer of fat to help them survive the winter.)  A few chatter at me as I pass, but for the most part I’m ignored.

What a change from last spring.  Mating season runs from February through March.  The pups emerge from their burrows about a month later. By May, this “town” is bustling.  Pups venture out, though never too far from the mounds of dirt surrounding their entryway.

On top of each mound, a large adult  “sentry” stands ramrod straight, vigilantly on alert for predators.  This guardian will chirp a sharp alarm when a human, regardless of benign behavior, approaches.  Their coterie darts back into the burrow until an all-clear is sounded.

By late summer, there’s been a changing of the guard.  The large sentries have stepped down, replaced by younger adults.

I’m thinking about this as I walk around the reservoir, having just read The Voice of the Rising Generation, by Jay Hughes, Susan Massenzio and Keith Whitaker.  The book reads like an engaging conversation among wise mentors and members of a “rising generation”―that is, the generation that’s born to parents who have accumulated substantial financial wealth.

Rising generations have challenges that are common to the offspring of “larger-than-life” parents.  Often, the authors tell us, the gravitational pull of the wealth founder’s dream is too powerful for the next generation to escape.  The children’s dreams fall by the wayside; they become silent stewards of the founder’s dream.

In the book's Introduction, a member of a rising generation puts it this way: “I’ve started on my own path, but I often find myself being pulled back home through all sorts of financial or business arrangements. What are ways to keep to my own course and still remain connected with my parents and larger family?”

It’s not easy. A member of a rising generation, by then in the final third of his life, said to me years ago: “The best advice I can give is: Don’t go into business with your father.  If you decide to buy a blue car and your father says to buy one that’s green, you’ll end up with a green car.”

So, what’s the solution?  Again, the authors: “The message is simple: You have a choice…”  They take the reader on a journey that begins with understanding the obstacles to finding one’s voice, and then they move on to strategies for dealing with the various challenges, no matter the reader’s stage of life.

It’s simpler for the prairie dogs.  Unless the environment somehow changes drastically, they can step into the shoes―I mean, footprints―of the sentries whose seniority allowed them to adjourn in late summer.  The pups aren’t going to have to develop a new script.  Instinct is their ally.  Their programming comes from a biological rather than a financial  “inheritance.”

Humans in the rising generation can’t fall back on instinct.  Indeed, that’s often the worst thing they can do.  Instead they have to summon forth the kind of creativity that distinguishes us from all the other animals.

And so, well before the time comes for the senior sentries to step down, there’ll be a generation that’s anything but silent--and that’s ready to go.