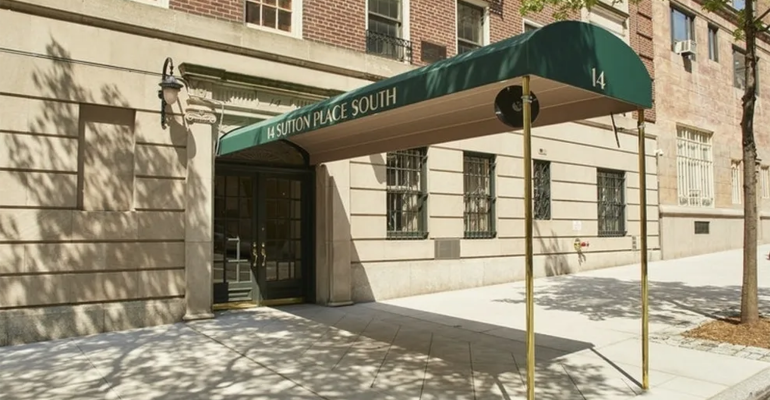 NY Doorman Claims Resident Promised Him a Third of His Fortune

He’s suing for his share of the estate after executor rejected his demand.

A doorman at a luxury apartment in New York City, at 14 Sutton Place in Midtown East, has filed suit against a former resident’s estate, claiming the man promised to leave him one-third of his fortune. Jose Rafael Padilla claims he became close with the decedent, James Clayton Larmett, and his late wife, Linda, over the 28 years the couple lived in the building.

Though not much is known about Larmett, we do know that current units on the market at the ritzy co-op have a $1.45 million starting price tag, so it’s likely the amount Padilla claims he’s entitled to is no small change.

According to court documents filed in New York Supreme Court, Padilla says he took care of Larmett’s beloved pets over the years and promised Larmett’s wife he would care for Larmett after her passing. “Mr. Larmett entrusted me with his health care proxy and with a power of attorney to enable me to further help him with his needs,” the papers allege. As Larmett’s health deteriorated, Padilla says he spent more and more time caring for Larmett, even sleeping at his apartment until a health aide was hired.

Padilla further claims that in consideration for his help over the many years that he’s known Larmett, Larmett promised to leave him one-fourth of his estate. He claims Larmett later increased the promised amount, telling him that he would change his will to leave Padilla one-third of his estate. The will was never amended prior to Larmett’s death.

To determine if Padilla has a valid claim, Mari Galvin, practice chair of the Trusts & Estates Group at Cassin & Cassin LLP in New York City, says the court will most likely look to New York’s Estates, Powers and Trust Law Section 13-2.1, which states that “Every agreement, promise or undertaking is unenforceable unless it or some note or memorandum thereof is in writing and subscribed by the party to be charged therewith, … if such agreement, promise or undertaking ... is a contract to make a testamentary provision of any kind.”

Although under New York law an individual can enter into a legally binding agreement to make or amend a testamentary provision, unfortunately for Padilla, an oral promise, one that isn’t in writing or signed by the promisor, isn’t enforceable. Since it doesn’t appear that Padilla has produced any written evidence of Larmett’s promises, any conversations the two may have had won’t suffice to entitle Padilla to any distribution.

Larmett, who died with a proper will in place from what we know, directed that the entirety of his estate be distributed to three animal rescue centers.