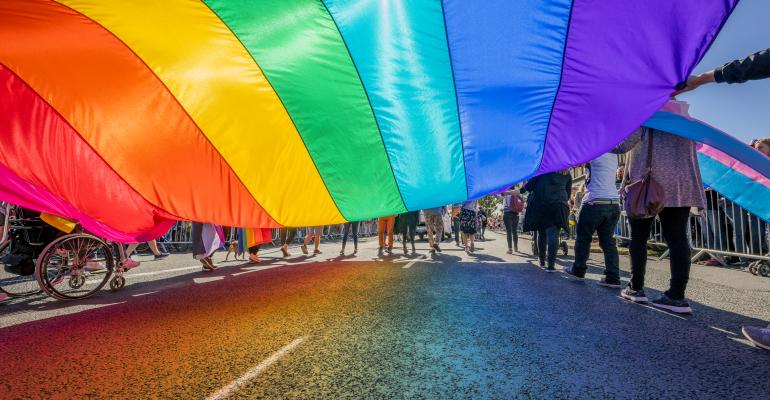 The modern estate-planning attorney will represent a significant number of lesbian, gay, bisexual, transgender and queer (LGBTQ) clients or clients who have family members or other potential beneficiaries in the LGBTQ community.1 The number of those clients is growing.2 Laws and drafting and planning techniques often haven’t kept pace and have failed to address some of the unique needs of this community. It’s also important for practitioners to understand that even if a particular client isn’t known to be LGBTQ or have current family members who are LGBTQ, it’s possible that a future descendant will be LGBTQ. This should be factored into drafting and planning.

Confronting all issues that LGBTQ clients and their beneficiaries may experience in estate planning simply can’t be addressed in an article of this brevity. Thus, we focus on three common issues that arise: (1) defining a beneficiary, (2) changing a name or gender, and (3) a fiduciary covering expenses. While each issue may be addressed using existing techniques, we propose an alternative approach to mitigate the issues described with flexibility—by the appointment of a special trust advisor (STA).

No doubt the optimal means to draft for any client, including LGBTQ clients, is to tailor each provision of the document to the client’s particular circumstances and to modify governing documents if there’s a change in facts. Some practitioners may not be comfortable drafting all of the necessary provisions. Even if the practitioner is knowledgeable, will all relevant issues be addressed? Many clients will delay for years returning to counsel to update provisions in a will or other critical document. The approach we suggest might provide a practical mechanism to address these issues. While tailoring all documents and modifying them as appropriate is preferable, a fallback approach might be useful.

One of the important issues to address for LGBTQ clients is the definition and determination of who should be included in the class of children, descendants and beneficiaries. For example, children could be adopted or born through surrogacy3 so that neither parent, or only one parent, is biologically related to the particular child. Sometimes the parents aren’t married and don’t go through a formal adoption process, which can make the family structure even more complicated.

Typical drafting language may not include as beneficiaries the very people that clients love and raise as their own children. Several approaches may exist to address this, including:

Another category of issues arises with LGBTQ beneficiaries if a named beneficiary changes their name or gender.5 It’s possible that, in such a situation, the individual will inadvertently be omitted as a beneficiary. For example, consider a beneficiary who changes their name from “John” to “Jane.” Will a bequest of “My Picasso to John” lapse? Now, consider a situation in which the oldest son has gender confirmation surgery and transitions to female. Will a bequest of “my gold watch to my oldest son” lapse, or would another child claim the gold watch? How can planners help clients avoid ambiguity and family strife in these situations?

There are several ways to address this:

Medical and other expenses can be substantial for LGBTQ individuals.6 Thus, another possible issue is what expenses may be encompassed within terminology for distributions that a trustee under a trust may or shall pay for. For example, if the governing instrument defines “permissible medical expenses” based on federal income tax law definitions of what constitutes a deductible medical expense, costly and important cosmetic and other procedures for an heir going through transition may not be permitted to be paid for or reimbursed. Might that payment or reimbursement be the client’s intent? One approach is to include a broader and more descriptive provision as to what constitutes reimbursable or distributable expenses for an heir. While such drafting could resolve the issue, it presumes that the settlor of a trust has knowledge that an LGBTQ beneficiary exists and that this issue needs to be addressed. Even well-crafted language, however, may not properly address expenses that may be incurred as medical science progresses.

An alternative approach is for the governing instrument to name a special limited trust protector (the STA) to address the issues described earlier. The idea is to name an individual, or perhaps an organization or entity (for example, the law firm that drafted documents and is intimately familiar with the client’s wishes) to act in a non-fiduciary capacity, to the extent permitted under state law. Expressly address those matters specific to the LGBTQ community in the powers granted to this STA, which may be a clear way to provide the appropriate authority to overcome many of the common issues discussed above. Of course, if the drafting attorney knows of concerns particular to the client or the client’s family, the provisions of the document should more specifically address those concerns. However, in many situations, the particular concerns may not be known at the time the document is drafted, and it’ll be prudent to add provisions allowing flexibility in managing issues that may arise in the future. To the extent many of these matters can be addressed in a single provision, it may be feasible to more economically (in terms of drafting time) address many of these matters than taking a specific approach of drafting for each of the many different issues that may come up in the appropriate portion of a trust instrument.

This power would be analogous, in some respects, to the power given to an individual in a hybrid domestic asset protection trust (DAPT) to appoint additional beneficiaries (although the uncertainties of adding the settlor in a hybrid DAPT aren’t relevant to this application of the concept). You can also give the STA the power to direct distributions to beneficiaries for medical, adoption, family planning and other costs that a trustee may not believe are covered under the terms of the governing instrument.

Note that it may not be possible, under the law of some jurisdictions, to name an STA to act in a non-fiduciary capacity. The STA may be considered a trust director within the meaning of the Uniform Directed Trust Act or an individual with the power to direct the trustee under former Section 808 of the Uniform Trust Code. If the governing jurisdiction has adopted a version of one or both of those acts, the applicable statutory law may provide that the STA, if considered a trust director, acts in a fiduciary capacity. In some cases, that may be the default under the statute, which may be overridden by the terms of the governing instrument. In any case, it’ll be necessary to know the jurisdiction’s applicable law on this subject.

Who should be named. A critical consideration to address is who should be named in the capacity of the STA. A member of the LGBTQ community knowledgeable and sensitive to the range of issues that might arise is perhaps the ideal individual to serve. In any event, the STA should be an independent individual and not a beneficiary or someone otherwise having any direct or indirect interest in the outcome of the decisions involved, to avoid potential transfer-tax consequences. Although this technique will generally be used in testamentary trusts, in the event it’s used in an inter vivos trust, also consider grantor trust issues in selecting the STA. As with other roles within the trust, it’s prudent to name successors or, in the event of a vacancy, include provisions that specifically address appointing a successor if the named STA ceases to serve for any reason. The typical approach of having a vote by adult beneficiaries or something similar to that may be inadvisable given the risk that one or more of those beneficiaries may not approve, or worse, be antagonistic to, the entire provision, which would defeat the purpose of having the STA. Furthermore, the individual acting as STA shouldn’t act in a fiduciary capacity in another role in the trust that might adversely affect the status as a non-fiduciary, which is intended.

A particular issue that might arise if the STA exercises the power to change a name or gender reference in a separate instrument (for example, a signed action by the STA) is that a transgender individual may not wish to have their dead name (that is, the name that the trans individual may have used before transition that they no longer use) continue to be reflected in the instrument. This is far more of a concern than merely semantics in the instrument. The incidence of violence and discrimination that transgender individuals have experienced and continue to experience is real and needs to be addressed. This problem might be resolved by the trustee thereafter decanting the trust into a new instrument reflecting solely that individual’s current name (so that there’s no legacy language remaining in the governing instrument). Perhaps the STA could be given the authority to direct the trustee to decant the trust to accomplish this objective. The STA could, or even should, be given the power to direct specifically how the name of the individual should be reflected in that new trust.

If a practitioner is satisfied with the approach suggested, she may nonetheless wish to revise other aspects of the governing document and planning, for example, to address proper use of pronouns, gender and other terminology. However, a client may be willing to accept the manner in which this provision addresses key issues.

For language to consider regarding the appointment of an STA in the governing instrument, see “Sample STA Clauses,” p. 18. 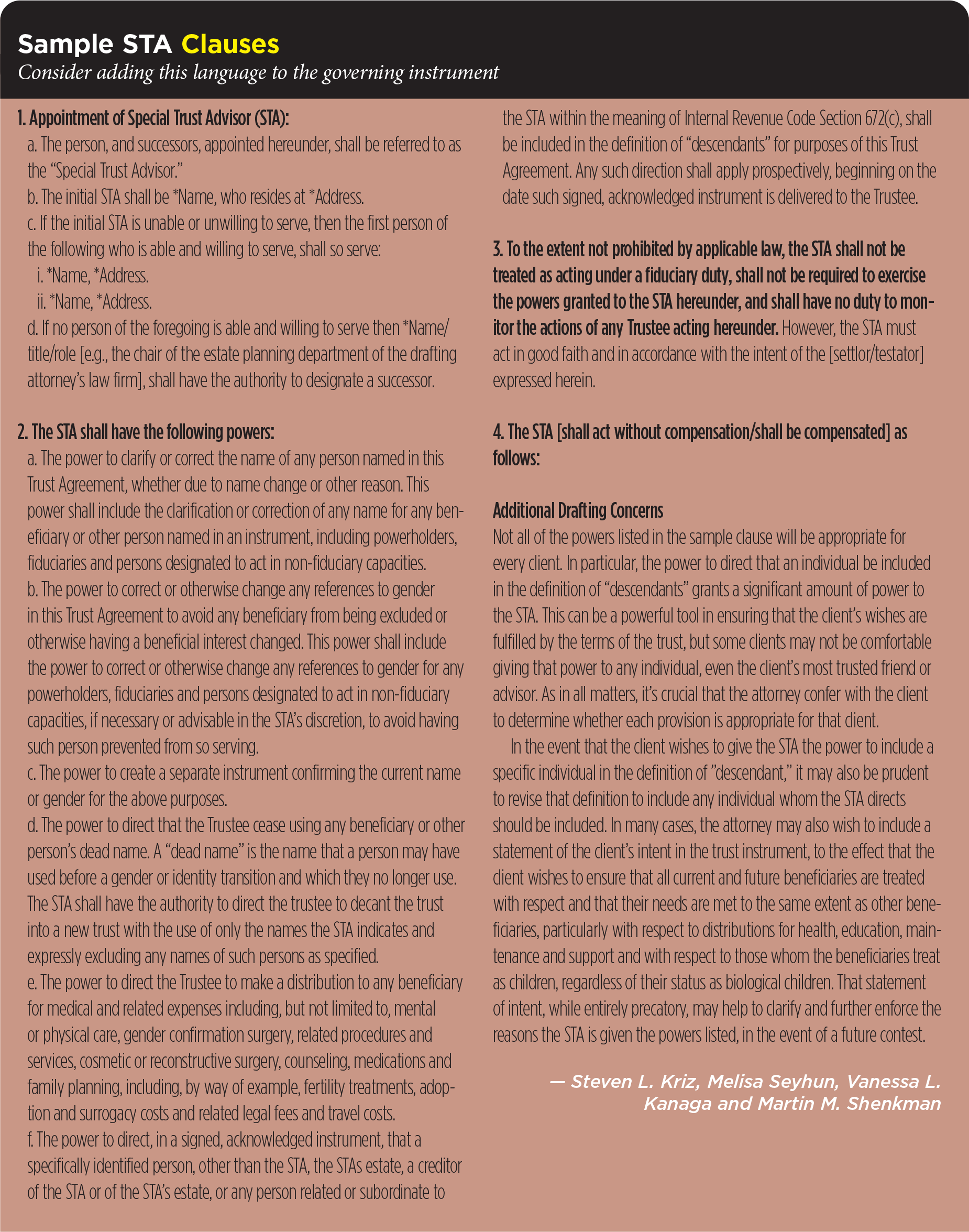 2. The figure was 3.5% in 2012, which grew to 4.5% in 2017, so the trend is certainly an increasing number of adults identifying as LGBTQ. As a result, it’s become and will continue to be more likely that practitioners will encounter LGBTQ clients and need to be prepared to address planning needs of the community. https://news.gallup.com/poll/234863/estimate-lgbt-population-rises.aspx.

5. See www.lambdalegal.org/know-your-rights/article/trans-changing-your-documents-resources for resources to facilitate a change in name.

6. For example, “Oft-cited figures from the Philadelphia Center for Transgender Surgery place the total cost of male-to-female and female-to-male surgeries at more than $100,000…,” www.marketwatch.com/story/the-difference-gender-affirming-surgery-can-make-in-a-transgender-persons-life-2019-10-07.