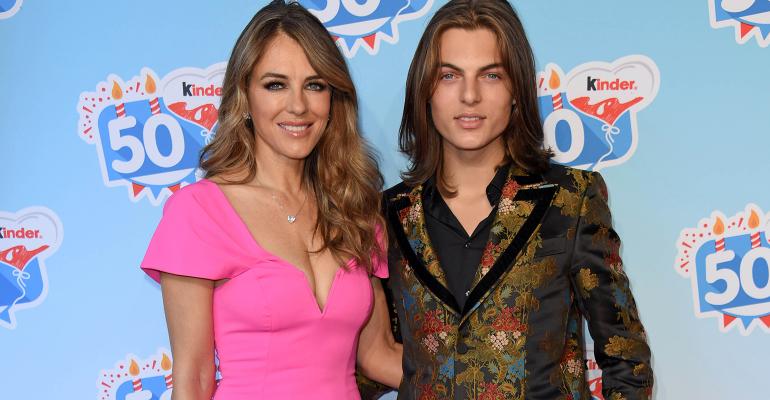 Court finds no ambiguity in trusts' use of the term 'grandchildren.'

Damian Hurley, son of actress Elizabeth Hurley and American businessman Steve Bing, has prevailed in a legal battle over his inheritance from his grandfather, multi-billionaire Peter Bing. Earlier this year, the trustee of Peter’s trust filed papers in Los Angeles County court seeking to clarify the meaning of ‘grandchildren’ in the trust. The action was spurred following a request for information on the trust by Steve’s other child, Kira Kerkorian Bing, who Steve shares with tennis player Lisa Bonder.

In his affidavit, Peter claims that he intended his 1980 trusts to only benefit future grandchildren who were born or adopted at a young age by Steve or his daughter Mary and “raised by [his] children as part of their families.” He went on to emphasize that he didn’t believe that his trusts would “benefit any person born out of wedlock unless that person has lived for a substantial period of time while a minor as a regular member of the household of the natural parent who is a child of [his].” He further states that his intentions at the time he created his trust are consistent with California Probate Code section 21115, that currently governs the issue of inheritance rights of out-of-wedlock children as pertaining to his 1980 trusts. As Peter claims that he never even met Damian or Kira, and that neither lived with Steve while a minor as a regular member of his household (he also claims that Steve has never even met Damian), he doesn’t consider either of them as his beneficiaries.

Court Finds No Ambiguity in Use of the Term ‘Grandchild’

According to court papers filed last week, judge Daniel Juarez has denied the motion filed by the trustee, ruling that “[t]here is no ambiguity in the Trusts' use of the term ‘grandchild.'” He cited case law in support of the well-documented rule that “[a]lthough wills are to be construed in accordance with the testator's intent, it is the intent expressed by the words of the will itself which must be given effect rather than some undisclosed purpose or intent that may have existed in the mind of the testator.” He noted that Peter’s restrictive interpretation is unreasonable.

Steve was apparently on the side of his children, as the Daily Mail reported that he “accused his father of ‘coordinating’ with his sister Mary to ‘orchestrate a massive money-grab,’ which would hurt his children, but enrich her own.” Steve also reportedly asked the judge to “penalize” his sister, which had it been enforced, would have completely disinherited her children (it's unclear whether this motion was based on a no-contest clause).

A Brief History of Inheritance Laws

Although it may seem fair for a grantor to decide which of his grandchildren he considers a beneficiary, particularly in situations in which he’s had no relationship with the grandchild in question, such specific intent needs to be made clear in the actual planning documents.

Under common law, out-of-wedlock children had no inheritance rights through either parent as society, and the law, valued a traditional family, that is a family established by marriage. However, under modern law, all U.S. states now allow a child born out of wedlock to inherit, although most states don’t grant paternal inheritance rights automatically. Typically, some evidence of paternity, either acknowledgment by the father or DNA testing, is needed to establish such rights. Many states have also enacted statutes under which there’s a presumption that any reference to children not further defined in a will includes both legitimate and “illegitimate children,” including adopted children, regardless of their relationship to the father.

Planning for the Future

Given the modern families of our current society, and our law’s presumption that the term ‘child’ or ‘grandchild’ in a will or other planning document is generally intended to include out-of-wedlock and adopted children, “estate planners need to start taking into consideration situations such as the one at hand,” says Louis S. Harrison, partner at Harrison & Held, LLP in Chicago. Discrepancies of the sort in the Bing case, in terms of whether a biological child born out of wedlock must live with a parent to be considered a grandchild, aren’t typically discussed with clients, Harrison added, but perhaps it’s time that planner start drafting to account for this modern view.

Because children being born out of wedlock is much more prevalent in today’s world, in addition to new technology enabling nontraditional ways of having children, such as posthumous-born children via use of genetically stored material, and so forth, it’s becoming increasingly more important to consider defining more precisely who the client considers a “child” or “grandchild.” Had his alleged intent been specifically conveyed in Peter’s original trust, it would have been a nonissue of which of his grandchildren he considered beneficiaries.