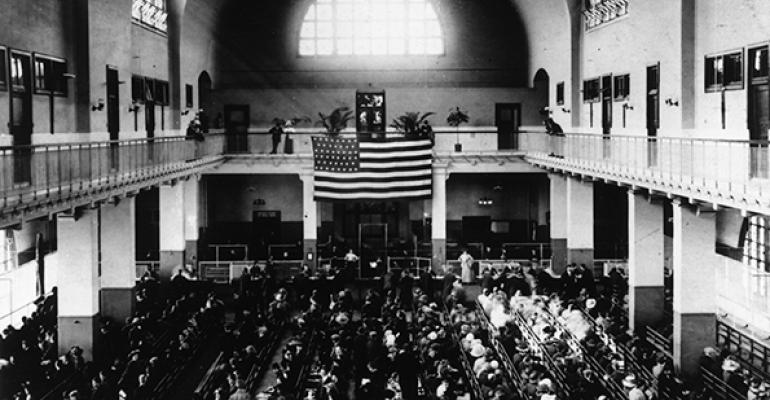 A Different Kind of “Immigration”

Flourishing in the land of wealth

It was around 1906 that my great-uncle Aaron, along with assorted family members on my mother’s side, arrived at Ellis Island.  They had journeyed all the way from Bialystok, then part of the Russian Empire.

Aaron was a musical prodigy still in his teens.  He had been one of a handful of Jews invited to study music at the St. Petersburg Conservatory, but was imprisoned as a “rabble-rouser” during a terrible outbreak of violence against Jews.  Following his release, the family left for a better life in America.

Aaron’s talent landed him a job playing piano for a burlesque house in Coney Island. Payment for a shift was two coupons―one good for a beer, the other for a hot dog.  Aaron traded his beer coupons (no one in our family drank beer) for hot dog coupons.

And―I smile at every conjuring up of this image―on Sundays, my extended family could be seen strolling the Coney Island boardwalk munching on hot dogs.

Aaron adapted well to his new country.  Stories within the family tell how he owned movie theatres in New Jersey and vending machines in Boston, although nobody knew for sure. Word has it that he made and lost a good deal of money several times during his lifetime.

According to Jewish Bialystok and Its Diaspora by Rebecca Kobrin, other émigrés from Bialystok didn’t adapt quite so readily.  Some saw America as a land of opportunity, while others felt more like the Yiddish journalist who lamented: “We Jewish immigrants from Bialystok suffer an acute homesickness…discovering it is impossible to feel at home, like we had in Bialystok.”  Adaptation comes readily to some. Other immigrants cling too strongly to the Old Country, while others lose themselves (and their heritage) too quickly in a new culture.

The Journey to Wealth

Last year, Dr. James Grubman authored Strangers in Paradise—How Families Adapt to Wealth Across Generations.  The core insight of his book shines in this single observation: “Those who achieve wealth over the course of their lifetime make a journey to wealth, one that very much resembles that of ethnic or geographic immigrants disembarking on the shores of a new land.”

For decades, Jim and his colleague Dennis Jaffe, both psychologists, have counseled members of wealthy families.  Several years ago, they began to notice similarities between their clients’ concerns and what social scientists have to say about the experience of migrating from one country to another.

In his Introduction to the book, Dennis explains: “Some of the difficulties in sustaining family wealth seemed to arise because wealth acquirers grew up in an economic culture that was poor or middle class.  After they acquired wealth, they didn’t know how to act or what to do.  As we put it, they acted like immigrants to a ‘Land of Wealth,’ raising children and grandchildren who are native to that land.”

Jim writes that, despite the media portrayal of disastrous results when it comes to handling first-generation wealth, “The majority of clients I’ve counseled over the years have been hoping to find productive ways to integrate where they came from and where they are now. Most have been trying to navigate a middle ground between what they learned growing up, what they still believe, and what they must do to understand their corner of economic paradise.”

Strangers in Paradise is a practical guide for families faced with navigating the stresses and tasks of adapting well to the Land of Wealth.  Whether you were born there or arrived there, you’ll face predictable challenges to parenting, family cohesion, identity and harmony.

One example: How must wealth’s newcomers adapt their parenting of children who are growing up in circumstances far more affluent than the parents themselves experienced?

Parents are faced with teaching familiar middle-class skills―individualism, self-sufficiency, perseverance, work ethic and managing one’s own assets – alongside “new” ones like wealth literacy, working with advisors, philanthropy and relationship skills.  Grubman offers parents clear-cut explanations, as well as an assortment of activities, for attaining solid proficiency.  The key, he writes, is to blend the best of the old and the new.  Children and grandchildren must know where the family came from economically, yet be actively prepared for their present and future.

Uncle Aaron’s adaptation to America embodied these very principles.  During the Great Depression, he owned the “fanciest” car in the neighborhood.  But he regularly spent weekend afternoons packing the younger set into the rumble seat of his roadster for treasured rides.  All the while, Aaron would be passing along life’s lessons in a blend of Yiddish and English.  He honored the values of his heritage, yet he was a man of the New World.

I’ve personally heard Jim and Dennis speak in depth about these concepts.  Jim notes that, as trusted advisors, we can help our clients become “bicultural” in their values and adjustment.  Those who become wealthy can, like my great-uncle Aaron, remain true to where they came from, while adapting to a new community and a new life. Strangers in Paradise shows how we can help our clients make the very same adaptation – to wealth.