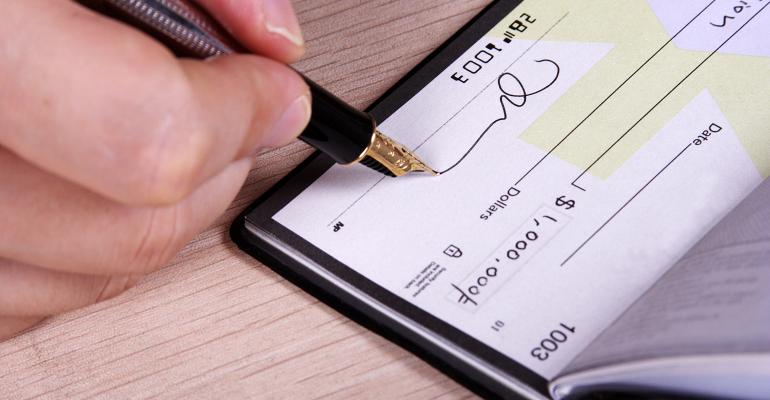 Tenth Circuit rules deduction is limited to an amount up to its basis in the property contributed to a charitable organization.

Like individuals and corporations, trusts and estates that make contributions of property to charitable organizations may be eligible to receive a corresponding income tax deduction for such contributions.

However, charitable contributions made by trusts are treated differently under the Internal Revenue Code from those made by other taxpayers. One obvious discrepancy appears in the income tax deduction taxpayers may receive when contributing appreciated property to a charitable organization. An individual, governed by IRC Section 170, may be eligible to deduct the appreciated property’s fair market value (FMV) from income, even though the taxpayer has never taken the appreciation into his own income.  This, itself, violates a principal of tax logic: a taxpayer shouldn’t be treated as having lost or given away something he’s never been treated as having.1 As for trusts and estates, the Internal Revenue Service has long held that a trust making a charitable contribution of appreciated property may be eligible to deduct an amount under IRC Section 642(c), up to the trust’s basis in the property -- not its unrealized appreciation.

Why did the IRS have to take this position in the first place?  Well, that’s because Section 642(c) isn’t exactly clear about what the trust or estate can take as a deduction.  While the requirements for a donation to qualify as a charitable deduction are clear,2  the decidedly ambiguous statutory phrase, “any amount of the gross income”3 leaves the allowable amount of a deduction under Section 642(c) up for debate.  Many income tax return preparers for trusts and estates have argued that they shouldn’t be treated differently from those individual and corporate taxpayers receiving deductions under Section 170 in the amount of the property’s FMV.  We know, however, that the IRS feels differently.  Earlier this month, the U.S. Court of Appeals for the Tenth Circuit in Mart D. Green, Trustee v. United States of America4 shed additional light on this issue and attempted to clear at least some of the confusion.

Eligibility for Deduction Under Section 642(c)

The facts of the case were largely undisputed:  David and Barbara Green executed the David and Barbara Green 1993 Dynasty Trust (the Trust), which permitted the trustee to make distributions from income and principal to charities described in Section 170(c). During the years in question (2002 - 2004), the Trust held a 99 percent ownership interest in Hob-Lob Limited Partnership, which owns and operates most of the Hobby Lobby retail stores nationwide. Each year, the Trust’s distributive share of Hobby Lobby’s ordinary business income was more than $60 million, and it received distributions of approximately $30 million to $40 million. In 2002 and 2004, the Trust purchased real property in Virginia, Oklahoma and Texas, and, in 2004, donated most of the property to largely religious charitable organizations.

The FMV of the donated properties was approximately $30.3 million.  The Trust’s basis in the properties, however, was only $10.7 million.  At no point had the Trust reported the unrealized appreciation of approximately $19.6 million.

On its 2004 tax return, the Trust reported income of approximately $58.8 million, of which most was unrelated business income. It also claimed a charitable deduction under Section 642(c) of approximately $20.5 million in cash and property. The Trust later amended its return to increase its reported charitable deduction from $20.5 million to $29.6 million, claiming a refund of $3.1 million. The IRS disallowed the deduction, and the Trust initiated the recovery of its federal income tax in District Court.

Trust: “The Deduction Permitted by Section 642(c) Should be Based on the Fair Market Value of the Contributed Property.”

IRS: “The Deduction Permitted by Section 642(c) Should be Limited to the Trust’s Adjusted Basis in the Contributed Property.”

Generally, Section 642(c) permits trusts to take a deduction for:

Nowhere in the statue, however, does it state the allowable amount of the deduction stemming from donations of appreciated property.

In determining what amount a trust can deduct when it donates appreciated property to a charitable organization, the Tenth Circuit first examined four potential interpretations of the phrase “any amount of the gross income” and found  that the statute was, indeed, ambiguous.  It also decided that the related Treasury regulations didn’t provide any useful insight.  The Tenth Circuit next considered tax policy in its examination of that perplexing phrase.  While income tax deductions have long been considered a matter of “legislative grace,” the U.S. Supreme Court has stated6 that tax provisions permitting charitable deductions are more of an expression of “public policy” and should be liberally construed in favor of the taxpayer. The Trust succeeded with this argument in front of the District Court, but it wasn’t as lucky in front of the Tenth Circuit, which declined to accept this reasoning.

As hinted at earlier, traditional tax principals suggest a taxpayer can’t be deemed to have given something up that the taxpayer never had.  As the Trust never sold or exchanged the properties at issue, it never realized the corresponding gains associated with their increases in FMV and was therefore never subject to tax on those gains.  As a result, the Circuit Court struggled to extend the deduction permitted by Section 642(c)(a) to unrealized gains.  It punted the issue, instead, to Congress, stating “unless and until Congress acts to make clear that it intended for the [section] 642(c)(1) deduction to extend to unrealized gains associated with real property originally purchased with gross income . . . , we conclude that we cannot construe the deduction in that manner.”7 In the meantime, we are left with inconsistent treatment of charitable contributions made by trusts and estates and those made by other taxpayers like individuals and corporations.

In the End, A Small Gift To Taxpayers

While the Trust in this case most certainly would have preferred to receive its $3 million refund with interest, one positive takeaway for taxpayers came from the dicta in this case.  The IRS asserted in its arguments that the phrase “any amount of the gross income” in Section 642(c) must be made out of gross income, but real property purchased with the gross income can also be treated as the equivalent of gross income for purposes of Section 642(c)(1).  This reasoning is favorable because it encourages charitable donations to a greater degree than an interpretation that limits deductions to the donations made exclusively from gross income.

This is a favorable position for taxpayers. This view expands the types of property (beyond strictly “gross income”) that can be contributed and result in a charitable deduction for a trust.  One can also appreciate the irony of the court’s desire to now liberally construe an ambiguous portion of the statute in favor of the taxpayers -- something it was uncomfortable doing in its final holding.