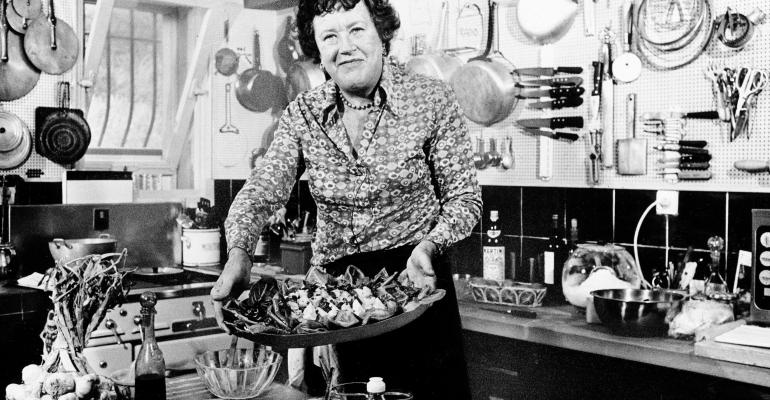 What beneficiaries and their advisors can learn from Julia Child

As a regular visitor to this website, you are likely not a trust beneficiary—but I'm quite sure you are close to several. You also have, at least now and then, made use of food metaphors, yes?

Well, this month’s column is a "snack"—for beneficiaries—along with those whose business it is to understand them.

After many hours watching Julia Child reruns, I can confidently report that a canister is very different from a casserole pan. And after 30 years in the “kitchen,” here’s another profound insight: A trust can be likened to either. It all depends on who’s asking...

The proposal was logical, and the person saying it was no hell-raiser. She told me: "I plan to take my attorney with me to my first meeting with the trustees."

This newly-minted beneficiary is a very bright and competent twenty-something grad student. Naturally, I asked: "Why have you decided to do that?”

“Because," she replied, "I read the trust agreement and I don’t like how much control my grandfather gave the trustees. In our telephone conversations so far, they don’t seem very interested in listening to what I would like. It’s clear to me that control is what my trust is all about."

I had been getting to know her family's background, and the trust reflected a certain context: “My grandfather was a very controlling person. So was my father before he passed away. My trustees work for the family business. This feels like more of the same." And so: "I want my attorney there to balance the power.”

The beneficiary had hired me to help her prepare for the meeting. But it's not like her entire future with the trustees would be decided in this one session. So, I suggested: “How about if you hold off on your decision to bring your attorney to the meeting until after we have had a conversation or two? Then decide.”

For the better part of an hour, we talked about the language of the trust. Turns out that some of what she interpreted as being controlling was necessary to preserve the trust’s integrity against potential challenges by her creditors: If she had been given too much authority, it could be pierced.

She became somewhat less frustrated. The context was widening and becoming less dependent on personalities. With prompting, she talked about her gratitude for what the trust would make possible. Her spirits began to lift.

Our subsequent conversations filled gaps in her knowledge. We talked about her upcoming meeting and her attendant assumptions, expectations and fears. Crafted an agenda and role-played. Her confidence grew visibly.

Flesh and blood individuals, alive or gone, make a trust what it is. And yet: “If you tear off the first page and the signature page of many traditional trust agreements," notes John A. Warnick, founder of the Purposeful Planning Institute, "it’s very often impossible to tell whose trust it is.”

Why is that? Because some treat trusts as canisters to hold assets—much as a canister might hold a couple pounds of flour. Beneficiaries (and happily, some trustees) know better.

Trusts are not canisters. They’re more like casserole pans, in which ingredients are tossed together.

Start with a trust agreement that’s opaque. Stir in a barely comprehensible process. Add a measure or two of inherited money that is “so near and yet so far.” And—let's hope this doesn’t push the kitchen- counter metaphor too far!—emotions become the "seasonings"that often determine whether a casserole is satisfying or cause to reach for antacid.  Turn up the heat and, “Voila!”

No wonder this beneficiary felt indigestion. Her initial response to the trust, like that of beneficiaries generally, showed the heavy influence of her experience within her family. From her perspective, the trustees were an extension of her grandfather.

My advice to new beneficiaries? Achieving trust literacy, like any branch of learning, is going to take effort. Not just study, but a rising level of awareness. You have more options than you now think. Put in the time to learn what they are.

As Kathy Wiseman and I compiled positive stories from beneficiaries and trustees for our 2012 book, TrustWorthy, one of the themes that emerged was the importance of staying with the learning process. In “The Rocky Road to Freedom,” a beneficiary tells us that she thought: “Well, this is kind of weird,” when first encountering her trust. She goes on to say, “When introduced to [my trustee], I was 30 years old. I saw this new relationship as possibly a time when I could learn.” It proved to be a turning point in her life. Time and again we’ve observed a similar effect.

In case you were wondering. I heard back from the beneficiary the other day. Her meeting went exceptionally well—without an attorney in sight. Her new approach looks to be both habit-forming and nutritionally sound.