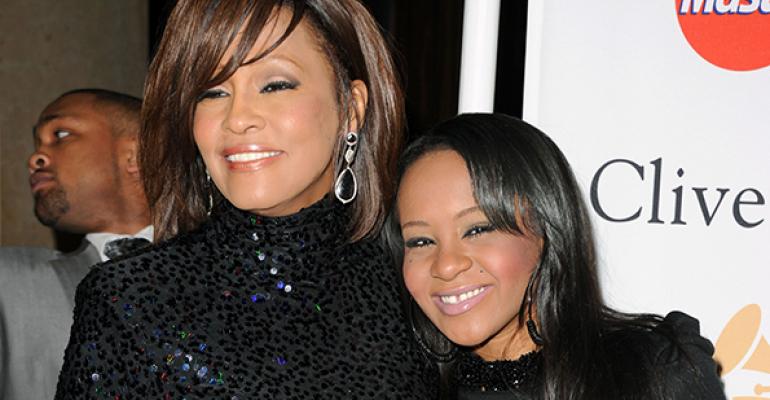 <p>Whitney Houston left the entirety of her estate, estimated at $20 million, to her daughter, Bobbi Kristina.</p>
Wealth Planning>Estate Planning

The fate of the late singer's fortune

News of Bobbi Kristina Brown’s untimely death sparks the inevitable question of who stands to inherit the late singer Whitney Houston's fortune.  Bobbi Kristina, Houston's only daughter, died Sunday at the age of 22, six months after being found unresponsive in a bathtub at her Georgia home.

Beneficiaries Under the Will

Houston’s will left the entirety of her estate in a spendthrift trust to Bobbi Kristina, the sole heir, to be distributed in three installments: 10 percent to be received at 21, 30 percent at 25, and the rest upon her turning 30. Based on these provisions, at the time of her death, Bobbi Kristina had only received 10 percent of the estate, the total amount of which is not publicly known but speculated to be worth around $20 million. The estate reportedly consists of property, jewelry, clothing and cars in addition to the record profits and music royalties (less what may have been spent to cover Bobbi Kristina's medical expenses).

According to Bruce H. Gaynes, of Georgia-based Kitchens Kelley Gaynes, P.C., who spoke with TheWrap, the will stipulates that in the event “Bobbi Kristina were to die unmarried, without children of her own and had left no will and testament of her own, the estate would be divided among Whitney's living relatives." Those relatives are Houston’s mother, Emily “Cissy” Houston, and her brothers, Michael and Gary.

As is usually the case with sizable estates, the likelihood of a messy court showdown is almost certain. Bobby Brown, Houston’s ex-husband and father of Bobbi Kristina, no longer stands to inherit any portion of the remaining 90 percent in trust unless otherwise stipulated in Houston’s estate plan (they divorced in 2007). However, Brown is the sole beneficiary of Bobbi Kristina’s estate as her next of kin, including the 10 percent she already inherited from the Houston estate, unless, in the unlikely event (given her young age), she left a will dictating otherwise.

Complicating matters is Nick Gordon, Bobbi Kristina’s boyfriend, who she claimed was her husband on various social media outlets. Absent a waiver of spousal rights (for example, a pre-nuptial agreement), every state has provisions entitling a surviving spouse to receive a portion of the deceased spouse’s estate, the elective share. The burden is on Gordon to produce a marriage certificate, as common-law marriage is no longer recognized in Georgia, the state where they resided. If he is able to do so, he is entitled to his share of Bobbi Kristina’s estate (but not the remainder of Houston’s estate). Another curve in the road for Gordon is the alleged lawsuit filed against him by Bobbi Kristina's court appointed conservator, Bedelia Hargrove. The allegations, amongst others, include claims that Gordon was transferring funds from Bobbi Kristina's account and that he engaged in domestic violence, causing the injuries that ultimately led to her death. (According to Forbes, there is also speculation by the media that criminal investigations against him are under way, and though beyond the scope of this article, would also affect Gordon's inheritance rights, if any, in the event of a conviction).

The only scenario in which all bets are off is if Bobbi Kristina did indeed leave behind a will, naming Gordon as the heir, or, also possibly, stipulating other unanticipated beneficiaries.