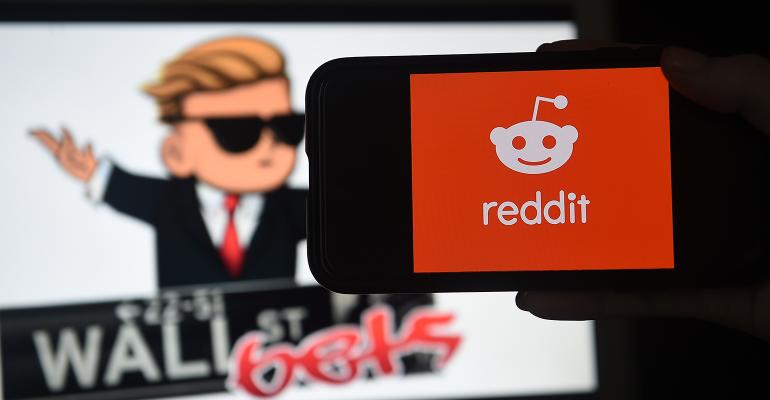 Every time financial markets stray from their core purpose of allocating sources of capital to productive uses in the real world, we get ourselves and each other into trouble.

“There is an innate tension in your business model, between democratizing finance, which is a noble calling, and being a conduit to feed fish to the sharks.”

“Many Americans feel that the system is stacked against them and no matter what, Wall Street always wins.”

Related: Reddit’s Power to Push Stocks Down Is the Next Worry for Traders

Less than a week after Congress drew its preferred meaning from the Reddit-fueled roller coaster ride that would-be day traders took the stock on in January—from $40 per share to $348 and back again—the game is still playing out. The last three trading days of February saw GameStop surge again by 150% before ending the month at more than $100 per share.

Blame to Go Around

We can thank Robinhood—and its knack for impaling itself on every regulatory, operational and client dis-service knife in the drawer—for helping Congress ink this saucy new chapter in the ongoing negative narrative about finance that has been a populist bestseller since the global financial crisis.

“Democratization of Finance” is the banner under which Robinhood’s online trading platform stakes its claim to making the world a better place. “We serve … millions of small investors who use our platform every day to invest,” CEO Vlad Tenev told the House Financial Services Committee in February. That’s a great sound bite, but monetization of retail order flow is the more obvious business purpose of Robinhood, a legal but morally dubious practice that I equate to big-tech firms selling online customer activity data to third parties.

But Robinhood is only part of the story. My own 4-inch-thick file of articles, blogs, reporting and commentary on the GameStop phenomenon reaffirms a lesson we never seem to learn as an industry or a society: Every time financial markets stray from their core purpose of allocating sources of capital to productive uses in the real world, we get ourselves and each other into trouble.

The impetus for the individual investors involved was apparently an online discussion, where bidding up the much-shorted stock was characterized as both a quick way to make money and a David vs. Goliath-style opportunity to show the Wall Street pros they weren’t as smart as they thought they were. Some on both sides made and lost money in the resulting fray. We can only hope the individuals understood the risks they were taking as well as the pros they pitted themselves against. So far, though, the most significant outcome seems to be the massive media opportunity for policy bedfellows as oddly paired as U.S. Rep. Alexandria Ocasio-Cortez and U.S. Sen. Ted Cruz. The one thing they now seem to agree on is that, yet again, finance has gone off the rails and violated its compact with society.

But the stakes are higher than the points politicians hope to score with anti–Wall Street voters. This is a time when we should be enabling our financial services sector to do more, not less, to help the global economy recover from the COVID-19 lockdown. Overreaching legislation and regulation spawned by opportunistic and distorted narratives are the last things we need right now.

Unfortunately, GameStop could make losers of us all.

John Taft is vice chairman of Baird. He is a member of the board of directors and past chairman of the Securities Industry and Financial Markets Association (SIFMA), where he advocated for responsible financial reform. He shares his perspective on the industry on his blog, “Finance for the Greater Good.”