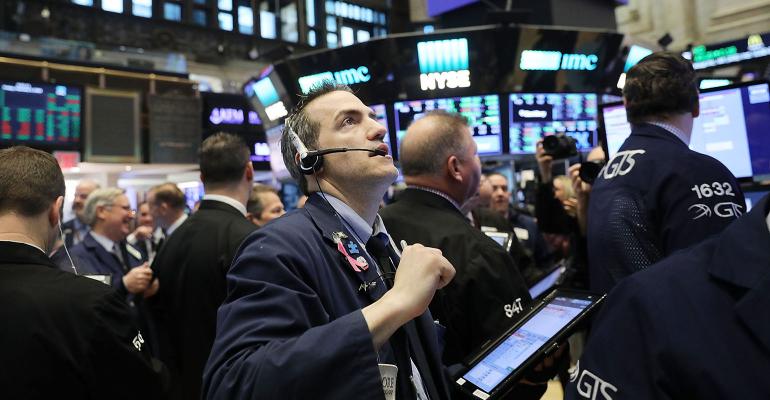 Will it last? Who knows? But for now, traders have stopped checking their dating apps as frequently.

Evidence of the impact of unpredictable, at times frenetic markets was obvious everywhere in recent days. Traders who typically pick up their phones to exchange tidbits of information asked to speak after the close. Capital markets bankers cut meetings short to run back to their desks. Everyone was checking their dating apps far less frequently.

Volatility is back, at long last. While the wild run lately may have unnerved ordinary investors, hope that the end of a preternatural calm will make for profitable opportunity has infused the likes of Goldman Sachs Group Inc. to an array of tiny independent brokerages

After three straight quarters of muted results, including an embarrassing fixed-income stumble at Goldman, the spasms could herald a shift to more normal markets, where downward moves are as expected as upward ones. Volatility is like oxygen, encouraging clients to place bets and protect their positions.

Whether it will last (and on this point, traders and analysts are divided) is anyone’s guess.

But the initial dispatch from Wall Street trading floors is that times are good, for now. Several of the biggest investment banks are in the midst of strong revenue boosts, according to people with direct knowledge of their operations.

The year started off on a promising note, with greater activity in commodities, foreign exchange and rates desks, these people said. As equities began to tumble at the end of January, eventually pushing indexes into correction, brokers found themselves in the middle of surging volumes.

Derivatives traders in particular thrived on record VIX volumes, according to another person familiar with the situation.

At Goldman Sachs, the commodities business profited from natural gas trading, according to other people with knowledge of the matter. That was something of a rebound from last year, when the New York-based bank’s commodities unit posted its worst performance in its history as a public company.

Now fun has returned to the job, according to the head of G-10 currencies trading at a London firm. While clients initially scaled back their exposure to risky investments amid the turmoil, they are now positioning for the next risk event, which some suspect may come from the U.S., this person said.

Another trader in London bragged that he made impressive profits so far this year on the back of greater volatility in forward currency contracts.

For clients on the buyside, volatility and the prospect that central banks will rein in the record stimulus should provide more opportunity to make money.

The calm, steadily rising markets that have characterized the post-financial crisis era have favored cheaper passive investments such as index funds and ETFs, to the benefit of the Vanguard Group and the detriment of most others.

It’s a welcome development for Diego Ferro, co-chief investment officer at Greylock Capital Management in New York, which specializes in distressed and high-yield assets and manages more than $1 billion. “Blindly buying the dip and relying on the central bank puts will be replaced with smart active management, the way it should be in normal times,” Ferro said.

And among struggling hedge funds, the fact that gains on the Standard & Poor’s 500 Index this year have just been wiped out mean that they now have a fighting chance at outperforming the benchmark. That industry has lagged the index for 10 of the last 12 years, according to HFR data.

Smaller intermediaries participated in the boom, as well. “It was one of our busiest weeks,” said Matt Basi, head of sales trading at CMC Markets Plc, a London-based brokerage. “We’ve got 15 traders on the desk I run and there was no one coming in late or going home early. The last time I remember any type of volatility that was even comparable was the financial crisis in 2008.”

One rates trader lamented that while his business had benefited from a rotation out of equities and into government bonds, the boost was muted compared to the pre-crisis days because regulators no longer allow his big Wall Street company to take risky proprietary positions to juice returns.

Other events, from the U.K. referendum to the election of Donald Trump as U.S. president in 2016, have provided jolts to trading that were ultimately fleeting. Ian Gordon, head of banks research at Investec Bank Plc, cautioned that it was too early to say whether the equity volatility would have a lasting impact on other assets.

“I don’t think we have tangible evidence yet whether this uptick in volatility is going to play out as a new trend in 2018, regardless of what the banks are all saying,” Gordon said.

And be careful for what you wish for. Spasms of volatility are going to be more commonplace because of computer-based momentum trades and Wall Street brokers holding less stock inventory now under the new regulatory regime, according to one bank’s electronic trading head. That sets the stage for a much wider set of dislocations.

Mohit Kumar, head of interest-rates strategy at Credit Agricole SA, said the recent price swings were nothing compared to what may be coming later this year if stocks fall again and central banks pull back on bond-buying programs. Volatility could spread into other risky assets that have attracted investors in search of yield, including emerging-market corporate debt, he said.

“We could see a sharp correction in a number of asset classes,” Kumar said. “We’ve been in a low-volatility environment for so long and now finally it’s coming back.”