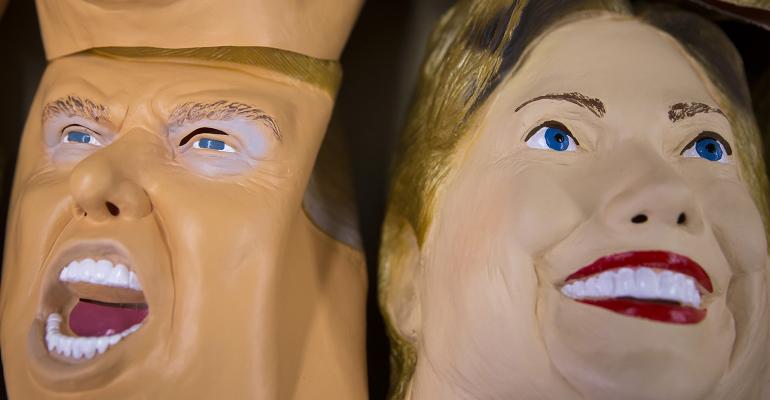 (Bloomberg) -- The U.S. presidential election is nine weeks away, but Wall Street has already chosen a winner: itself.

Just when you’d expect volatility to be on the rise in the face of mounting political uncertainty, the sanguine state of stock, bond and currency markets in the run-up to Nov. 8 paints a very different picture. On the surface, fear is nowhere to be seen. In its place -- optimism that four more years of political gridlock will stymie efforts to loosen the fiscal purse strings, forcing central bankers to continue relying on the same easy-money policies that have driven asset values to unprecedented highs.

A Hillary Clinton victory over Donald Trump combined with a split Congress would do just that, and it’s this Goldilocks scenario that Wall Street is pricing in, according to Bank of America Corp.’s David Woo. Yet that’s left hedge funds and other speculative investors exposed if the policy paralysis that’s dominated U.S. politics for the last six years doesn’t materialize again.

“Whatever the probability you may give to it now, a clean sweep with the same party winning the presidency and control of Congress would have a massive impact on markets,” said Woo, head of global rates and foreign-exchange research at the Charlotte, North Carolina-based bank. "With the volatility market basically dead now, we are especially vulnerable to a risk-unwind scenario.”

At this stage of the race for the White House and control of Congress, investors are usually dialing down risk and loading up on insurance to protect against the unforeseen. Not this time.

Net long positions in contracts linked to the S&P 500 Index, Nasdaq 100 Index and Dow Jones Industrial Average climbed to $57 billion last month, the most since 1986, according to data compiled by Sundial Capital Research Inc.

“There’s something in the political calculus that’s missing in the models right now,” said Alan Gayle, a senior strategist at RidgeWorth Investments in Atlanta, which has about $37 billion in assets. “The low level of volatility suggests that there’s some hope gridlock will be maintained in November. But hope is not a strategy, and that complacency is vulnerable to a fairly significant shift over the next several months.”

Bond traders are just as confident. The CBOE/CBOT Treasury volatility index tumbled to 4.65 Tuesday, its lowest this year. The gauge, which measures the expected fluctuations in the 10-year Treasury note, has plunged since peaking in February, when investors fled to haven assets amid global financial-market tumult.

In the $5.1 trillion-a-day global foreign-exchange market, expectations for price swings over the next three months have also tumbled to near the lowest since December. And implied volatility on three-month options for the euro versus the dollar, the world’s most actively traded currency pair, has slid to 8.2 percent, down from 13.1 percent on June 24.

Below-norm volatility at this juncture may stem from investors’ knowledge that any change after the vote won’t be felt in markets until well into 2017, according to Jim Caron, a senior fixed-income portfolio manager at Morgan Stanley Investment Management, which oversees about $400 billion.

“The markets are seeing this event and saying ‘Yes, we understand the election is the second Tuesday in November, but the reality is that the economic impact is almost one year forward from that date,’” Caron said. “From an economic perspective, both candidates will give you fiscal stimulus. But you are talking 2017 until there is any package.”

By contrast, investors were heavily hedged going into June’s Brexit referendum, even though polls predicted the U.K. would remain in the European Union, an outcome that wasn’t expected to roil markets. A spread monitored by equity options traders to track demand for protective hedges -- implied versus realized volatility on the S&P 500 -- widened to a record in the days leading up to the vote as share prices climbed.

Under the surface, there are signs that U.S. money managers are starting to get more cautious. Fixed-income investors parked more of their assets in cash than at any point over the past 15 years in July, while shifting into shorter-maturity debt, according to data compiled by Bank of America and Bloomberg. Recent surveys should only ratchet up concern.

In an average of polls collected by RealClearPolitics, Clinton, the Democratic Party nominee, holds just a 3.3 percentage point advantage over Trump, her Republican rival, down from 7.9 percentage points less than a month ago. PredictWise, an aggregator of betting-market data, gives Clinton a 74 percent chance to win the election, compared to 81 percent odds three weeks ago.

Beyond the presidential race, the eventual makeup of Congress, comprised of the House of Representatives and the Senate, will also determine how successful Democrats and Republicans will be in getting their agendas passed in the new year. The last six years of President Barack Obama’s term have been marked by gridlock after Republicans took control of the House in 2010 and Senate four years later.

Democrats need a net gain of four or five seats to secure Senate control, depending on whether Trump or Clinton wins the White House. They now hold 46 seats, if two independents who caucus with Democrats are included, while Republicans control 54.

“The only thing we really know for certain about U.S. elections since 1960 is that markets hate a tight race,” said Woo.