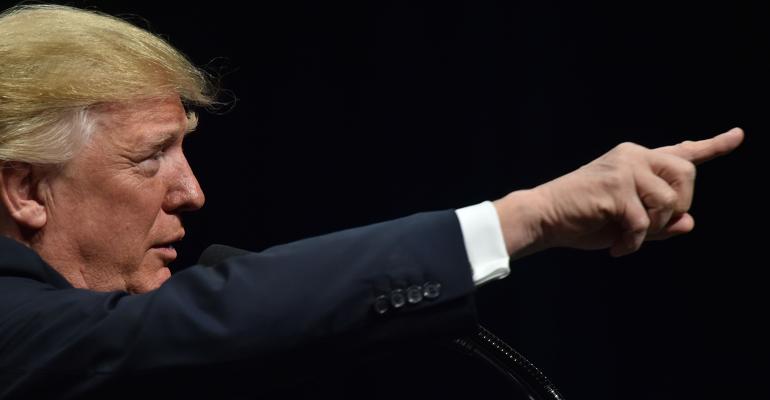 While markets remain smartly higher under Trump, with the S&P 500 up 35% since Election Day in 2016, the declines of the last week have cut the return under his presidency by more than a third.

This week’s stock market plunge sparked by fears the coronavirus will drag down the economy posed a unique dilemma for a president who has staked his 2020 re-election campaign squarely on U.S. economic growth.

Related: It’s Back to Volmageddon With $13 Billion Exiting S&P 500 ETF

Trump has grappled with how to respond. Earlier this week, he appeared to downplay risks from the virus and suggested that investors buy the dip in shares. As the sharp descent continued, he shifted blame to the media and Democrats.

“I think the press has been really out of line,” Trump told reporters Thursday evening at the White House when asked about the market dive. The benchmark S&P 500 index plunged more than 3% on Friday and is now down more than 15% from its record high, opening a seventh straight day of losses -- its longest slump in more than three years and potentially its worst week since the financial crisis.

The Dow Jones Industrial Average has shed more than 4,000 points this week. Crude slid toward $45 a barrel and gold lost 2%.

While analysts say the sell-off is driven by concern about the spread of coronavirus and U.S. preparations to combat an outbreak, Trump has constructed an alternative narrative. He said that investors are selling in part out of fear he’ll lose re-election in 2020, citing the Tuesday night debate performance of the candidates vying for the Democratic nomination.

“They see these characters up on stage, and anything can happen in an election,” Trump said. “And if any of these people ever did happen to assume the presidency, you would have a crash like we’ve never seen before. And I think the market’s also putting that into the equation.”

While markets remain smartly higher under Trump, with the S&P 500 up 35% since Election Day in 2016, the declines of the last week have cut the return under his presidency by more than a third.

Trump’s top economic adviser, Larry Kudlow, on Friday encouraged long-term investors to get back into the market or increase their positions. He said he believes “the market has gone too far” and investors “should not over-react.”

He said the government is not currently planning “precipitous policies” such as lifting tariffs on Chinese goods. “We just think the economy is sound,” he said.

He acknowledged that the government has the capability to increase production of critical supplies such as protective masks but said he didn’t want to specify what actions might be taken. Reuters reported on Thursday that officials were considering invoking the Defense Production Act to order manufacturers to make more masks and other gear.

Bond traders are increasingly betting that Federal Reserve may be forced into an emergency interest rate cut for the first time since the global financial crisis. The wagers have driven down benchmark yields in U.S. Treasuries to record lows and spurred the biggest one-day drop in the London interbank offered rate for dollars since the 2008.

Trump summoned reporters after markets closed on Thursday to an event to commemorate African American History Month. He ended the talk with repeated defenses of his administration’s approach to the global coronavirus outbreak.

Democrats and Republicans “should not make this a political issue,” he said, before assailing Democratic Senate Minority Leader Chuck Schumer. Trump praised himself for being “very good” and “calming” during a news conference on the health crisis a day earlier, during which he belittled Schumer and House Speaker Nancy Pelosi.

Trump, more than any president in living memory, has bound his political fate to the trajectory of markets. For most of his time in office, markets have rallied, and he has regularly and unabashedly taken credit for the ascent.

But this week isn’t the first time Trump has been quick to blame other forces when markets turn.

Last fall, when gloomy economic data sent the equities down, Trump singled out two favorite targets: Federal Reserve Chairman Jerome Powell and Democrats who were then pursuing his impeachment in the U.S. House.

--With assistance from Jordan Fabian.

To contact the reporter on this story:
Josh Wingrove in Washington at [email protected]

To contact the editors responsible for this story:
Alex Wayne at [email protected]
Joshua Gallu