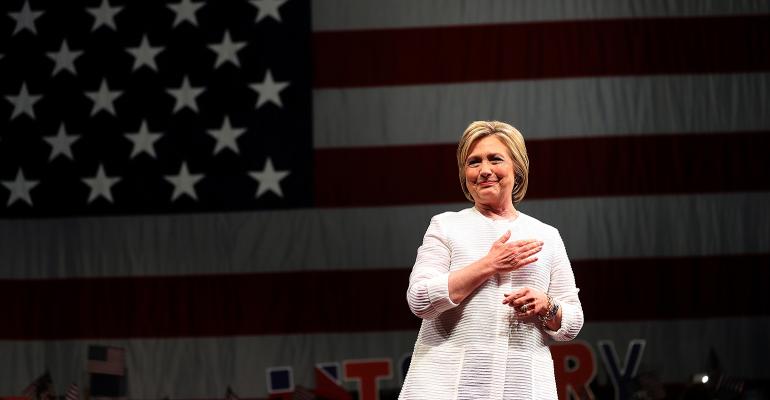 The Stock Market Has a Favorite in the Election

When Hillary Clinton does well, and/or Donald Trump slumps, the markets rise.

Economists Justin Wolfers and Eric Zitzewitz have documented this extraordinary convergence in a new paper, entitled “What do financial markets think of the 2016 election?” Here is their picture of how the markets moved on that night:

That change is much bigger than the average hourly change in Standard & Poor's 500 Index futures. It would be an extreme coincidence if these two things happened by chance. The most likely explanation is that financial markets think a Clinton victory would be good for the economy. That would imply exactly the kind of market moves we see in the graph. We saw some of the opposite happen when stock markets plunged on Friday, immediately after an announcement by FBI Director James Comey that the agency was reviewing new evidence in a probe related to its investigation of Hillary Clinton's use of a private e-mail server while she was secretary of state.

Why would markets not like Trump? Well, it’s pretty obvious. Trump’s mercurial temperament, unconventional ideas and lack of governing experience would create large doubts about the direction of all sorts of government policy -- just the sort of thing that makes investors uneasy. Normally, stock markets seem to prefer Republicans, presumably because of their more business-friendly policies. Trump, however, is no typical Republican politician.

However, a plausible story and a single event study -- as Wolfers and Zitzewitz’ research technique is called -- don’t make for an open-and-shut case. As soon as the finding was released, people began to criticize it.

The first main criticism I saw was that Wolfers and Zitzewitz were attempting to predict where the market was headed. This isn't true. Event studies don’t predict markets; they try to isolate the reason for a market move that has already happened. For example, finance professors often study the behavior of markets just before and after companies’ earnings announcements. This study is no different -- there’s no market-beating forecasting involved.

A more trenchant critique was that it’s hard to find other, similar examples. The first debate wasn’t the only thing that has moved the odds of a Trump victory this election season. Private-sector economists Kathryn Asher, Adam Ozimen, and Ryan Sweet looked at the overall correlation between the stock market and Trump’s strength in the prediction markets, and found no correlation.

In addition, Wolfers and Zitzewitz looked at a second event -- the release of a tape of Trump saying offensive things about women, on the evening of Oct. 7. This event was complicated by the fact that markets were closed for the weekend, allowing other events to potentially contaminate the data. Wolfers and Zitzewitz did find a modest increase in the stock market the following Monday, along with a moderate rise in Clinton’s chances -- a result that supports the idea that markets don’t like Trump, but only moderately.

So was the night of the first debate a one-time fluke? Not necessarily -- there’s evidence that investors usually ignore political events.

In 2012, economists Jawad Addoum and Alok Kumar of the University of Miami wrote a paper studying the relationship of stock markets and politics. They found that changes in the political climate affect the markets in systematic ways -- some industries tend to do better during Republican administrations, others during Democratic ones.

However, crucially, this performance happens with a lag. It takes months after a change of the party in power for the Republican and Democratic industries to realize their returns. Those changes are predictable -- they allow a savvy observer of politics to make extra risk-adjusted profits, which seems to be a violation of the efficient markets hypothesis. It means that investors aren’t fully paying attention to politics.

So in general, we’d expect a result like that of Asher, et al. to be the norm. Markets usually take a long time to price in political developments.

But occasionally, attention must rise. There are a few political events where the whole world is watching -- the conventions and the debates. It seems reasonable that the first clash between Clinton and Trump would be one of those special times. And therefore, the general lack of correlation between stock prices and the Clinton-Trump balance could still be consistent with the idea that markets fear Trump.

So Wolfers and Zitzewitz make a strong case. But I’m still not convinced. Though the evidence that the debate and the continuing FBI probe moved markets is strong, the question of why markets reacted hasn’t really been answered. Fear of Trump is the obvious theory, but I have another hypothesis. Clinton’s steady, calm debate performance might have allayed fears about her own competence, or it might have reassured investors that she doesn’t intend to dismantle the current economic order. That reassurance might have made markets more optimistic. But if Trump pulls back into the lead in the final week of the campaign, that reassurance will be less relevant.